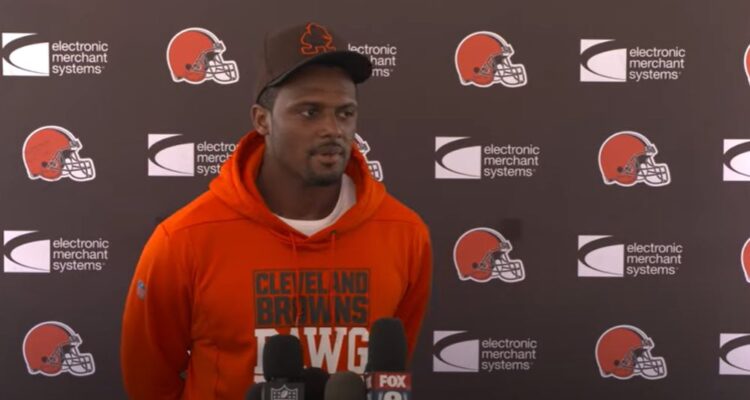 The NFL and the players union, the NFLPA, reached a deal to suspend Cleveland Browns quarterback Deshaun Watson for 11 games and fine him $5 million.

Watson was found to have engaged in sexual assault by Disciplinary Officer and retired judge Sue L. Robinson who ruled that Watson be suspended for six regulars season games and mandated that he “limit his massage therapy to Club-directed sessions and Club-approved massage therapists for the duration of his career.”

An investigation into Robinson was launched by the NFL after a woman brought a civil lawsuit against him that alleged he “engaged n lewd and indecent sexual behavior during a private massage she provided.”

Watson would face a total of 23 lawsuits with similar allegations.

The NFL appealed the ruling with NFL PR’s Brian McCarthy declaring, “On Monday, Judge Sue L. Robinson, the independent Disciplinary Officer jointly appointed by the NFL and the NFL Players Association, issued her ruling in the Personal Conduct Policy matter regarding Deshaun Watson.”

“Under the 2020 NFL-NFLPA collective bargaining agreement (‘CBA’), the factual findings of the Disciplinary Officer are binding and may not be appealed. Judge Robinson found that Mr. Watson violated the NFL’s Personal Conduct Policy on multiple occasions and suspended him for six games,” the statement continued. “The CBA affords the NFL or NFLPA the right to appeal the disciple imposed by the Disciplinary Officer. Such an appeal must be filed within three days and would be heard by the Commissioner or his designee.”

“The NFL notified the NFLPA that it will appeal Judge Robinson’s disciplinary decision and filed its brief this afternoon. Commissioner Roger Goodell will determine who will hear the appeal,” the statement concluded.

The deal was first announced by Joseph Pasteris, a self-described “independent Patriots and NFL reporter” that Watson is being suspended 11 games and fined $5 million.

He wrote on Twitter, “BREAKING: Browns QB DeShaun Watson is being suspended for 11 games, fined $5 million, and being required to attend counseling, per NFL Communications.”

He then backed up his claim sharing a press release that states, “Browns’ QB suspended for first 11 regular season games; must commit to mandatory evaluation and treatment; fined $5 million.”

It also states, “Fine will be combined with additional donations from NFL and Browns resulting in $7 million to support the prevention of sexual misconduct and assault.”

The press release further elaborates, “Deshaun Watson of the Cleveland Browns is suspended without pay for the first 11 games of the 2022 regular and fined $5 million for violations of the NFL’s Personal Conduct Policy, it was announced today.”

“In addition, Watson will promptly undergo a professional evaluation by behavioral experts and will follow their treatment,” it states.

It goes on, “Watson’s fine and contributions from the NFL and the Browns of $1 million each will create a fund of $7 million. This fund will support the work of non-profit organizations across the country that educate young people on healthy relationships, promote education and prevention of sexual misconduct and assault, support survivors, and related causes.”

NFL Commissioner Roger Goodell added in a statement, “Deshaun has committed to doing the hard work on himself that is necessary for his return to the NFL.”

“This settlement requires compliance with a professional evaluation and treatment plan, a significant fine, and a more substantial suspension. We are grateful to Judge Robinson and Peter Harvey for their efforts in addressing these matters, which laid the foundation for reaching this conclusion,” he added.

The press release was confirmed by NFL Network reporter Ian Rapoport who shared a copy on Twitter writing, “The NFL has now announced the settlement for Browns QB Deshaun Watson.”

Browns owners Dee and Jimmy Haslam released a statement. It reads, “As we have previously conveyed, Deshaun and his representatives have abided by the NFL and NFLPA structure awaiting a final decision and we have respected the process.”

“Now that a decision on discipline has been reached, we understand this is a real opportunity to create meaningful change and we are committed to investing in programs in Northeast Ohio that will educate our youth regarding awareness, understanding, and most importantly, prevention of sexual misconduct and the many underlying causes of such behavior.”

They concluded, “Since Deshaun entered our building, he has been an outstanding member of our organization and shown a true dedication to working on himself both on and off the field. We will continue to support him as he focuses on earning the trust of our community.”

RELATED: WATCH: Bodycam Footage Shows Police Dragging Marshawn Lynch From His Vehicle As He Appears To Nod In And Out Of Consciousness

Watson released his own statement as well, “I’m grateful that the disciplinary process has ended and extremely appreciative of the tremendous support I have received throughout my short time with the Browns organization.”

“I apologize once again for any pain this situation has caused,” he continued. “I take accountability for the decisions I made. My focus going forward is on working to become the best version of myself on and off the field and supporting my teammates however possible while I’m away from the team.”

He concluded, “I’m excited about what the future holds for me in Cleveland.”

Watson also took part in a press conference earlier today saying in part, “I’m looking forward to just moving forward with my career and being able to get back on the field as soon as possible.”

“That’s the plan is to continue to grow as a person and individual and keep pushing forward,” he added.

He also doubled down and claims he’s innocent and did not commit any of the actions he’s accused of. He said, “I’ve always stood on my innocence and always said that I’ve never assaulted anyone or disrespected anyone and I’m continuing to stand on that.”

“But at the same time I have to continue to push forward with my life and my career and for us to be able to move forward I have to be able to take steps and put pride to the side and I’m going to continue stand on my innocence and keep pushing forward and I’ve always, you know, stood on not disrespecting or sexual assaulting anyone,” he added.

When asked why he was apologizing, he said, “For everyone that was affected by this situation. There was a lot of people that was triggered.”

When a reporter asks about the women who accused him, he says, “I’ve apologized to all women so anybody that was affected even yourself, everything. So, I’m apologizing to everyone that was affected about this whole situation.”

According to Rapoport, “Browns coach Kevin Stefanski announced that QB Deshaun Watson won’t play in anymore preseason games. He can practice until Aug 30, be back on the practice field in November and is set to play against the Texans for Week 13.”

What do you make of this new deal that increases the suspension and fines Watson?

NEXT: Harris County District Attorney Says NFL Did Not Contact Her About DeShaun Watson