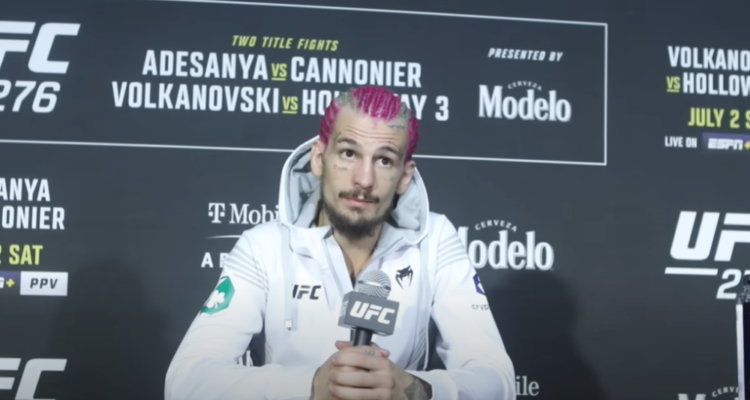 Rising UFC star Sean O’Malley will take a huge step up when he takes on Petr Yan at UFC 280 this October.

While MMA fans are universally excited about the Yan-O’Malley match up, there are questions as to whether O’Malley is ready for the jump up in competition. Yan is a former champion and current number one contender in the bantamweight division. O’Malley is ranked 13th and has yet to beat a ranked opponent.

Part of the reason for those questions is that O’Malley’s most recent bout ended unceremoniously. His last fight with #8 ranked Pedro Munhoz resulted in a no-contest after O’Malley accidentally poked Munhoz in the eye and Munhoz was unable to continue.

In O’Malley’s eyes, it was a win for him.

When asked by Ariel Helwani whether he’d consider a rematch with Munhoz down the road, O’Malley swiftly shut the idea down. O’Malley is convinced that he was dominating the fight and that Munhoz was looking for a way out.

“No, there’s no way [he’d rematch Munhoz]. I mean, I’ve seen guys take f**king fingers all the way through their eyes and they continue. They want it. They want to win. Obviously, it was an accident. I just really didn’t feel like that did enough damage to completely stop that fight.”

It’s worth noting that while many fans shared this sentiment, Munhoz went out of his way to counter the narrative. Following the fight, Munhoz released his medical records via Instagram.

As you can see below he was diagnosed with “Abrasion of right cornea” and “acute right eye pain.”

Nevertheless, O’Malley went on to say that Munhoz isn’t a big name, and that the only reason he fought him in the first place was to get a win over someone ranked in the top ten. Now, he feels like he’s done that, and there’s no reason for a rematch.

O’Malley is convinced that Munhoz is in his rear view. Whether that turns out to be true will depend on a number of factors, chief of which is how he performs against Yan.

While O’Malley says he dominated Munhoz, most fans and analysts seem convinced that it was a fairly competitive fight while it lasted. In fact, two of the three judges scored the first round for Munhoz.

There’s no doubt that Yan is a tier above Munhoz, and a much bigger test. If O’Malley can pass it, a title shot won’t be far off. If he can’t, well, there’s a good chance he sees Munhoz again.