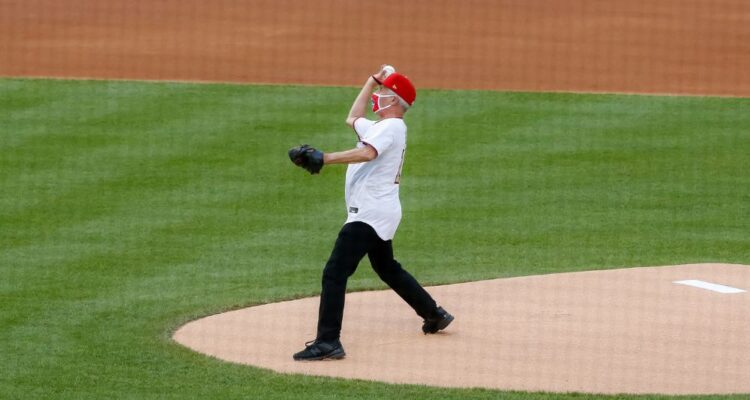 You know you’re unpopular when the left-wing Seattle Mariners fan base showers you with boos.

That’s exactly what happened to COVID-19 czar Anthony Fauci this past Tuesday.

It all went down at T-Mobile Park in Seattle, as Fauci threw out the first pitch.

Mariners fans showered coronavirus czar Anthony Fauci with boos as he prepared to throw out the first pitch during Tuesday’s game.

Watch as Anthony Fauci gets booed by fans as he makes an appearance at a baseball game. pic.twitter.com/3vDHMMTCx1

Fauci, a baseball fan and former high school basketball player, lobbed a weak pitch to catcher Scott Servais. He previously threw out the first pitch during a Washington Nationals game in 2020 to a mixed reaction.

In a truly cringe moment in professional sports, Servais asked Fauci to autograph a facemask.

Dr. Fauci’s first pitch. Servais caught it and then had Fauci sign his mask after. pic.twitter.com/SjOf4alLtE

Not only did the king of COVID-19 misinformation throw out the first pitch, but he also received an honorary Hutch Award.

The Hutch Award is an award given by the Fred Hutchinson Cancer Research Center. They’re based in Seattle and the award is typically given to a Major League Baseball player who “best exemplifies the determined spirit of the late Fred Hutchinson, a pitcher and manager who died of cancer in 1964 at age 45.”

Fauci is only the second person to receive an honorary Hutch Award, along with former President Jimmy Carter. Former President Carter received the honorary award in 2016.

It’s not clear exactly what Fauci did outside of spreading lies and misinformation to hundreds of millions of Americans to deserve an honorary Hutch Award. I certainly don’t recall Fred Hutchinson doing that.

There is no bigger indictment of Fauci’s mishandling of the COVID-19 pandemic than him being booed in Seattle. Whether it’s AIDS or COVID-19, if someone knows how to botch a health crisis it’s Anthony Fauci, the head of the National Institute of Allergy and Infectious Diseases.

Perhaps instead of lining up appearances on left-wing, corporate media, Fauci can actually focus on not funding gain of function research in Wuhan, not pretending cloth masks are effective in spreading COVID-19, and not pretending the ineffective and potentially dangerous vaccine is something healthy Americans should get.