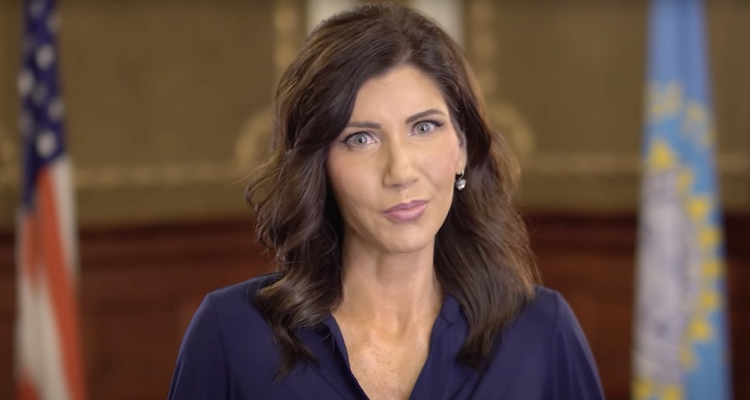 Kristi Noem, Republican Governor for South Dakota, condemned the comments made by former professional basketball player and ESPN analyst Jalen Rose, who recently called for Mount Rushmore to be retired.

“Why do you think Washington changed their name from Redskins?” rhetorically inquired the ESPN analyst this past weekend. “I do a show and didn’t say that word for eight years. And [with] my co-host David Jacoby, we both said, ‘they’re going to change one day.’ Why? Because it’s offensive.”

He went on, “What about the Cleveland Indians? Same thing. Why did they change the name? Because it’s offensive. So, I want to continue to challenge myself and to challenge you to do something.”

Here's why using Mount Rushmore to define greatness should be retired immediately. pic.twitter.com/mtYYTtKFSa

“Can we retire using Mount Rushmore?” Rose encouraged, adding, “That should be offensive to all of us, especially Native Americans; the indigenous people who were the first people here — before Christopher Columbus. Their land was stolen from them when it was discovered that it contained gold.”

The former NBA player then decried, “And 25 years later, to add insult to injury, four American presidents were put on what we call Mount Rushmore; on the top of the dead bodies that [are] buried right underneath.”

Rose’s call for the cancellation of Mount Rushmore did not sit well with a sizeable amount of users on social media, who voiced their opinion about the outrageous comments made by the insufferably woke ESPN analyst.

“If it wasn’t for those men….you wouldn’t be a multi millionaire,” said @Winning4Him, questioning Rose’s shameful smear of the presidents whose faces are represented on Mount Rushmore; namely George Washington, Thomas Jefferson, Theodore Roosevelt, and Abraham Lincoln.

“Just here for the ratio,” joked another user, adding, “… and to tell Jalen to grow a pair. Maybe you lefties should start helping to build this country up instead of just tearing it down until it bottoms out at your level.”

“Go pound salt Jalen,” said Twitter user @JZ41008219 before declaring, “You made it in this country, you’re living a dream because of all those before you. Be thankful for what you have and all you can do.”

The user added, “Our history created you and all the opportunities we have today. You don’t like it, go somewhere else.”

“All lands on this planet were conquered from previous people! There is not one spot that has not been conquered by others many times!” asserted @Tommycarle.

He elaborated. “We are sensitive about our immediate past but don’t understand the thousands of generations that it took to get where we are now!”

Alluding to Rose’s outrageous request to get rid of the term Mount Rushmore, Twitter user @curtis8658 sarcastically declared, “You offend me. Can we get rid of you?”

Another user declared, “As a Native American myself, I never heard my dad or Grandparents, aunts, uncles, great aunts & uncles, or any other relative ever have a problem with the teams you mentioned.”

“So basically you as a non-Native American can shut up about it, fight your own battles of victimhood,” he encouraged Rose.

“The four men on Mount Rushmore were amazing, flawed American leaders who helped make America what it is today — the greatest country the world has ever known,” Noem fervently stated.

She then added,  “To the woke leftists obsessed with attacking these leaders, I’ve got news for you: not on my watch,” as she retweeted Rose’s original post.

The four men on Mount Rushmore were amazing, flawed American leaders who helped make America what it is today — the greatest country the world has ever known.

To the woke leftists obsessed with attacking these leaders, I’ve got news for you: not on my watch. https://t.co/gSQfNlLlzb

Of course, this wouldn’t be the first time Rose would take to social media to shove his political beliefs down people’s throats. In August of 2020, the ESPN analyst threw his full support behind the Black Lives Matter Movement.

“Have your white friends said Black Lives Matter publicly??? If not…” he wrote, throwing some fist emojis that could well be a call for violence against white individuals who do not support the radical activist group.

In April of 2021, Rose celebrated that Derek Chauvin “is going to be punished for his action” following the Minneapolis police officer’s conviction in the death of George Floyd, as he further pushed for the defunding of the police.

“What happens next?” he asked ESPN co-host David Jacoby, explaining, “While we celebrate, are there going to be police reform bills taking place? When this take[sic] place again, because it’s going to take place again. It continues to happen. What’s going to be different?”

.@JalenRose reacts to the guilty verdict passed down to Derek Chauvin after the murder of George Floyd. pic.twitter.com/By642fSoJW

Later that year, in November to be precise, the former NBA player pushed the narrative that Black Lives Matter protests took place “because Jacob Blake was shot and killed by police officers,” alluding to an incident that took place in Kenosha, Wisconsin on the 20th of August, 2020.

What Rose intentionally failed to mention, however, was that Jacob Blake was not shot and killed by the police. In fact, the 29-year-old man was shot after being tasered by police officers whilst attempting to stab them with a knife he was carrying; Blake did not die.

Outkick founder and talk show host Clay Travis called him out at the time, stating, “Hey [Jalen Rose] Jacob Blake is still alive, not dead. And he was shot by police because he had a knife, refused to drop it, and a woman he’d sexually assaulted called police asking for protection,” denouncing ESPN for allowing the woke analyst to spread lies on live television.

Hey @JalenRose Jacob Blake is still alive, not dead. And he was shot by police because he had a knife, refused to drop it, and a woman he’d sexually assaulted called police asking for protection. This is embarrassing @espn. pic.twitter.com/9ykTEq88tn

“This is completely unacceptable [ESPN], you employ thousands of employees. If your talent is too dumb to know the facts, you have an obligation to educate them. And when you fail this badly you owe all your viewers a correction and public apology for your stupidity,” Travis denounced.

It is worth pointing out that Rose has not issued any responses following his outrageous comments about Mount Rushmore, nor has he addressed Governor Noem’s reply.

As of writing, the woke ESPN analyst has yet to apologise for spreading lies about the police and the shooting of Jacob Blake.