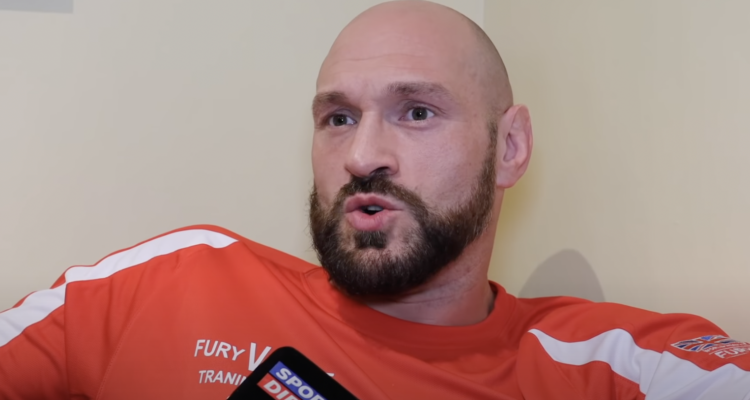 Chisora responded with a video of his own.

“Tyson, stop talking s**t, mate,” Chisora said. “Phone mommy and daddy. Mommy is [Fury’s longtime promoter] Frank Warren, daddy is f**king Bob Arum. Tell them you want to hang out with me, okay. And send me the paperwork, b*tch.”

Fury later said that he’d spoken to Chisora’s management and that the contract would be sent in “a day or so.”

“The Gypsy King” announced his retirement following his sixth round knockout of Dillian Whyte in April. At the time, Fury said that “no amount of material assets or money will make me come back out of retirement because I’m very happy.”

While almost no one in the boxing world believed Fury’s retirement talk, the Chisora matchup did come out of left field. Most fans and pundits thought Fury would wait for the winner of the rematch between Oleksandr Usyk and Anthony Joshua, which takes place on August 20 in Saudi Arabia.

Fury posted another Instagram video on Sunday explaining why he is coming out of retirement to fight Chisora.

“I’ve decided to come back to boxing because I can be the first heavyweight champion in history to have two trilogies, one with Deontay Wilder and a second one with Derek Chisora,” Fury said. “I’ve always said I’d fight Chisora at the end of my career, and here we are, breaking all records again and setting precedents.”

According to ESPN, the fight is targeted for December at Principality Stadium in Cardiff, England. Fury will attempt to defend his WBC strap for the third time.

It’s likely that Fury’s team views the Chisora fight as a “tune-up.” At 38 years old, “Del Boy” is well past his prime, and has lost three of his last four fights. Chisora’s most recent fight was a split decision win over 41-year-old former title challenger Kubrat Pulev. On top of that, Fury already holds two wins over Chisora. Fury handily won a decision in their 2010 match-up, and made Chisora quit on the stool after the tenth round of their 2014 rematch.

However, Chisora is still a big name in the heavyweight division, particularly in England. This bout gives Fury the opportunity to perform in front of a sellout crowd in his home country, and build even more hype for a showdown with the winner of Usyk-Joshua.

Another interesting wrinkle in this story is that Fury once again switched trainers, this time to longtime training partner Isaac Lowe. Lowe is Fury’s third trainer since his comeback to boxing in 2018.

While Fury-Chisora is certainly not the fight boxing fans are clamoring for, it is exciting to have “The Gypsy King” officially return. Hopefully, Fury and Chisora produce a fun fight that moves us closer to the fight we truly want: the undisputed heavyweight title between Fury and the Joshua-Usyk winner.

What do you think? Would you like to see Fury embark on second trilogy fight?