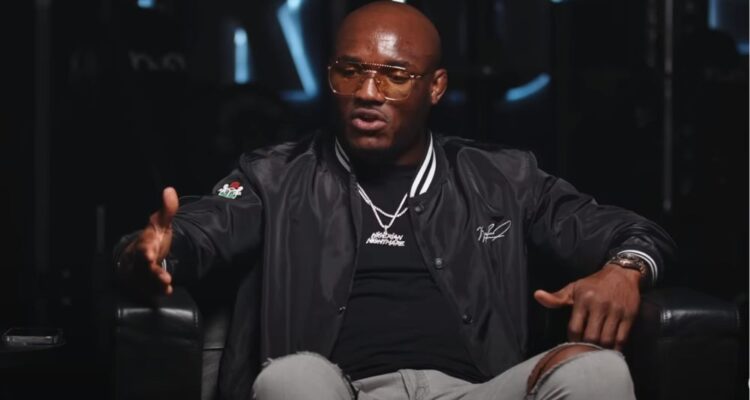 UFC Welterweight Champion Kamaru Usman Blasts Our Narcissistic Culture, Says Most Motivating Thing For Him Is Being An Example To His Daughter

Usman recently did an interview with I AM ATHLETE where he was asked by co-host D.J. Williams about Gilbert Burns switching weight classes and challenging Usman for the championship belt.

Usman used the question to criticize the current state of society saying, “We’re in a society now to where the line is blurred between good and bad publicity. There’s no such thing anymore. It’s just publicity. You see it on the ‘gram all day whether it’s male, female. It doesn’t matter. There’s no such thing. Everybody just wants to be seen nowadays. So they’re willing to say and do whatever just to be seen.”

“For me, I was raised different and my roots is deep,” he noted. “First of all, I was raised in Nigeria long enough to be able to understand what Mom and Dad says and how we conduct ourselves. And then being a southern boy too, raised in Texas, you know I understand there’s certain lines you don’t cross, and I’m sticking by that.”

The Welterweight Champion then addressed potential criticism, “And I know some people might say, ‘Ah, nah, that’s not controversial enough. That’s not — you’re boring.'”

Brandon Marshall then interjected and asked if he was missing out on money, Usman responded, “A little bit, yeah. Absolutely.” Marshall and Williams then recounted how they practiced end zone dances in an attempt to make their brand bigger and increase their money bags.

Usman replied to this saying, “You’re absolutely right, though. And it plagued for me awhile. It really did because I’m not doing that. I’m not crossing those lines. I’m not saying certain things like that.” He then went on to acknowledge that Conor McGregor takes a completely opposite approach to him.

However, Usman then asserted that there are “different rules for different people.” He explained, “McGregor can do the whole Floyd. Floyd being done with this. Floyd been done all this. Floyd been wrote the playbook on all of it. McGregor comes out and does it and guess what he’s even bigger.”

He then pointed to the fact that’s he black is one of the reasons why there’s a different rule for him. “Of course color plays a role in it. Look at what we just went through. We went through a pandemic and on top of it riots. Look at the whole police situation, the police brutality situation. This is facts. This is real. You are treated differently in different places. And that’s okay.”

“I understand it,” Usman reiterated. “This is just the era and this is the time that I’m living in. So I’m not going to cry over spilled milk, I’m going to make the best of it. But I understand that, yeah, there’s certain things that you can and can’t do.”

“But for me, the biggest thing is I’m not willing to jeopardize who I am just for the extra bag,” he declared. “What’s having $20 million in the bank when nobody respects you. That’s the point.”

He further explained, “You still got to pay in the club. You got to buy the bottles. You still have to pay for them. What’s the point of that if nobody respects you at all. You are still going to feel unhappy on the inside. For me that’s the biggest thing is getting over that hump because at first it’s like man, why people — they’re not really — I’m being me, but they’re not really rocking with it right now.”

“But then it got to a point where I got so comfortable like I don’t give a f*** if they rock with it or not. And then eventually you walk out and then they cheering,” he said.

He provided an example, “Before the Masvidal fight they booed me. I was the champion. They booed me. Yeah, I understand we in Florida, I live here too. They booed me, but when we left they was cheering. So at the end of the day as long as I do my job, I’m going to be happy with the end result. That’s the biggest thing.”

Usman defends his belt against Leon Edwards at UFC 278 this Saturday at Vivint Arena in Salt Lake City.

What do you make of Usman’s criticism of our current culture and society?

NEXT: UFC Welterweight Champion Kamaru Usman: Conor McGregor Is “Done As A Champion”