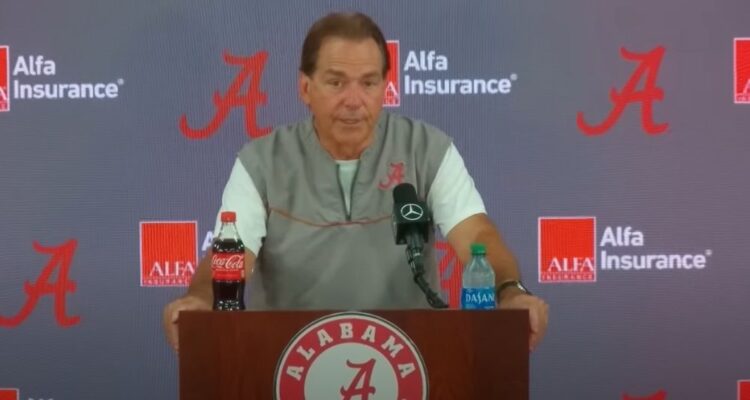 Alabama head coach Nick Saban had some harsh words for his team calling on them to perform better after they barely eked out a win over Texas in their second game of the season.

Texas responded at the beginning of the second quarter with a one yard touchdown run from Bijan Robinson.

Things would switch up a little bit beginning in the second half with Texas taking the lead with a field goal in the the third quarter. They would extend their lead in the fourth quarter with another field goal.

Alabama would finally respond with a 7-yard touchdown pass to Jahmyr Gibbs. Texas then responded by driving down the field and hitting another field goal. However, they gave Alabama enough time for a final drive that culminated in a 33-yard field goal clinching the win.

RELATED: LSU Reporter Snaps At Head Coach Brian Kelly After He Chides Her On Timeliness: “Maybe If You Win, I’ll Be On Time”

Following the game, Saban told the media, “Well, the one good thing you have to say about our team is they showed tremendous resiliency today to do the things they needed to do late in the third quarter, fourth quarter to come back and win the game after not really playing Alabama football for the first three quarters of the game.”

“You’ve got to give Texas a lot of credit. They had a good plan, did a good job of executing it,” he added.

Returning to his own team, Saban said, “We made a lot of mental errors. We had way too many penalties. Shoot ourselves in the foot quite a bit then run the ball without any consistency on offense when we tried.”

“There’s one stretch in the game where we went three and out, five straight times in the I think second and third quarter. Which, you know, we had great field position a couple times, couldn’t take advantage of it,” he assessed.

He went on to reveal what he told the team following the close win, “So, there’s a tremendous amount of things that we can learn from as a team. What I told the team is if you practice hard, the game is easy. If you don’t push yourself in practice then the game becomes hard.

Saban then reiterated, “But the resiliency our guys showed to make plays at the end of the game when we needed them to make, they made them. So you got to say that’s great form a competitive standpoint. I think that’s great from a team character standpoint, but if we’re going to be the kind of team that we want to be, that we’re capable of being, we’re going to have to play better down in and down out.”

“As I told the players before this game, this is like playing an SEC game on the road. This kind of atmosphere, this kind of team that we’re playing, Texas has a lot better team than people give them credit for,” he noted. “And they’re going to be in the SEC. And if they were in the SEC right now, they’d probably be in the top half of the league.”

Saban continued, “So this was a real test for us and we didn’t play as well as we’d like to play from beginning to end, but in the end when we had to make plays, players did a great job of making the plays they needed to make.

“Perseverance, resiliency, ability to overcome adversity got to give them an A for all that. But not so good with some of the other execution that we had earlier in the game. And we got to get it fixed, and I think it’s all things that we can get fixed,” he concluded.

Not only was Saban blunt about his team’s performance directly following the game, but he also recently questioned their competitiveness compared to previous Alabama teams.

He told Alabama beat reporter Charlie Potter, “We used to play better on the road around here than what we played at home because we had some hateful competitors on our team and whey they played on the road, they were mad at 100,000 people, not just the 11 they were playing against.”

Saban also talked about the competitiveness of his team during his Wednesday press conference this week saying, “I think the big focus this week as I said earlier in the week, is continuing to play hard, but play smart. Play with more discipline. Make good choices and decisions. Intelligence, intensity, sense of urgency, those things are really important, but you got to focus them in the right place in terms of what you need to do to do your job correctly because that creates value for you, but it also creates value for the team.”

He then relayed, “And I think one of the things that we’re trying to get our players to understand is — there’s a lot of emphasis on winning games, but true competitors really want to play to the best of their ability, try to dominate the competition whoever it is and I think that helps you play at a high standard all the time, which I think is something else that we need to stay focused on so we get more consistent in what we do.”

Alabama plays LA-Monroe this coming weekend. The game starts at 4:00 PM ET. SEC play for the Crimson Tide begins on September 24th when they play Vanderbilt.

What do you make of Saban questioning his team’s competitiveness? Will it inspire them to play better?