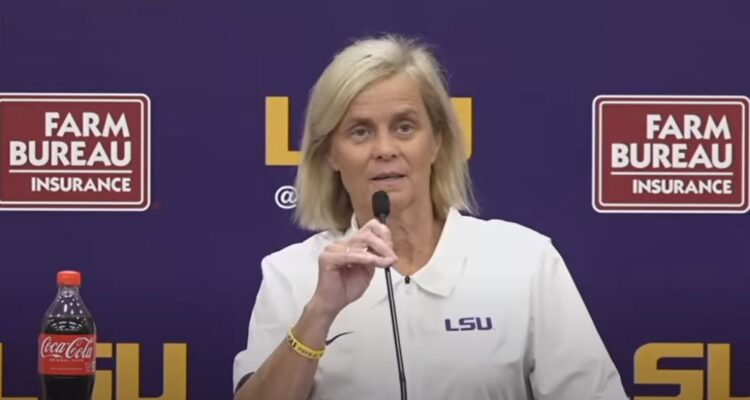 Current LSU Women’s Basketball coach Kim Mulkey, who was the coach at Baylor University when confessed and convicted criminal Brittney Griner played college basketball, chose not to comment on Griner’s prison sentence and due to her silence she’s been labeled a bigot.

During a recent press conference, Mulkey was asked for a comment on her thoughts about Brittney Griner’s situation.

She bluntly declined to comment saying, “And you won’t.”

Kim Mulkey declined to comment on Brittney Griner’s situation when asked about it Monday.

Mulkey’s comments began making the rounds on social media and numerous users began accusing her of being a bigot.

TheGaychel wrote, “Being a bigot takes a toll on you.”

Still another called her a racist. Tamtamreed wrote, “Wow parents don’t send your daughters to this racist woman.”

YouTuber Ryan Kinel of Sports Wars documented a number of other Twitter users attacking Mulkey for not making a comment on “Brittney Griner, the American hating criminal Brittney Griner.”

He also touched on former Baylor University player Queen Egbo, who currently plays for the Indiana Fever, and criticized Mulkey’s silence tweeting, “A player that built Baylor, 2 national titles, & a 40-0 record. Yet her former coach refuses to say anything or simply just show any kind of support. Keep that in mind when you’re choosing schools.”

Kinel reacted to these two players and others going after Mulkey saying, “Because Kim Mulkey refuses to take the side or stand up for Brittney Griner or say anything, because she’s simply saying you’re not gonna hear a comment from me on that topic that is enough for these people to come out and attack her over it. What an absolute joke.”

It is an absolute joke and these people have made a joke of themselves and exposed themselves for who they truly are by spouting such hatred simply because she refused to publicly comment on Brittney Griner.

What do you make of these attacks against Kim Mulkey?

NEXT: Gilbert Arenas Claims Brittney Griner Is The “Queen Of Russia,” Doesn’t Believe She’s Being Held In Prison