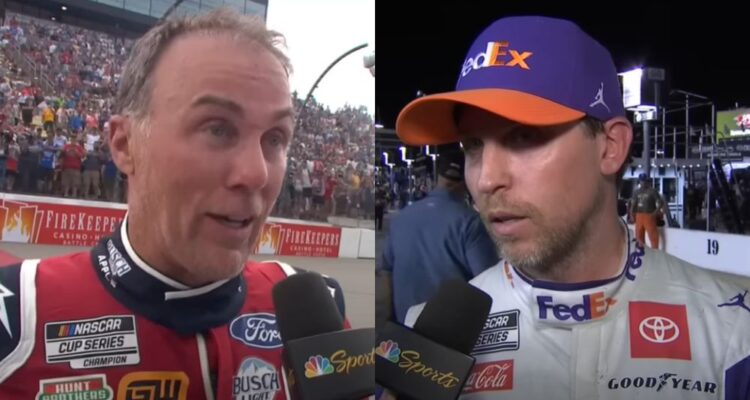 Kevin Harvick and Denny Hamlin expressed their displeasure towards NASCAR after the driver of the No. 48 Chevrolet for Hendrick Motorsports, Alex Bowman, announced he is suffering “concussion-like symptoms” following a wreck at Texas Motor Speedway.

Bowman announced he’s suffering from “concussion-like symptoms” via Twitter writing, “After undergoing medical evaluation due to concussion-like symptoms, I will not be driving the No. 48 Ally Chevrolet in Talladega. I’m disappointed but know my health is the number one priority. I am committed to follow all medical guidance to ensure I can return to competition as soon as possible.”

RELATED: NASCAR Punishes Both Ty Gibbs And William Byron For Their Actions At Texas Motor Speedway

Hendrick Motorsports made it clear the concussion-like symptoms came “following an accident in the Sept. 25 event at Texas Motor Speedway.”

They also revealed that Noah Gragson will be driving Bowman’s car for the upcoming race at Talladega.

With less than 10 laps to go in Stage 1 of the race, Bowman blew a right rear tire and backed hard into the wall.

FOX Sports reporter Bob Pockrass shared an audio clip of Bowman following the wreck where he says, “Done. I can’t drive the rest of the day. I don’t understand how this thing’s still rolling. That’s the hardest I’ve crashed anything in my entire life.”

Around the 1:23 mark is the Alex Bowman radio transmission after the wreck where he mentions how hard the hit was. … He finished the race at Texas. He will miss the Talladega race after suffering concussion-type symptoms. https://t.co/C9JprlPgKS

As Pockrass notes, Bowman did finish the race at Texas coming in 29th. That finish dropped him to the bottom of the NASCAR Cup Series Playoff standing. He’s currently 26 points behind 8th place driver Chase Briscoe. With him being unable to race at Talladega, it’s highly likely his Championship hopes for this year are finished.

Harvick reacted to Bowman’s comments on the in-car radio writing on Twitter, “Completely unacceptable that those in charge have let things get to this point.”

“I remember it like it was yesterday, Denny Hamlin in the presentation of the new car to the drivers pleading that the car was to stiff. Data didn’t agree,” Harvick asserted.

He then demanded, “TIME TO LISTEN TO THE DRIVERS CRASHING THEM!”

Hamlin, who not only drives the No. 11 Toyota Camry for Joe Gibbs Racing, but is co-owner of the No.45 Toyota Camry that had been driven by Kurt Busch, also shared his thoughts excoriating NASCAR writing, “Pretty disappointing that our sanctioning body refuses to acknowledge or accept any responsibility for drivers getting hurt. It’s the same THEY said. WE knew better.”

“It’s wrong these drivers continue to get taken advantage of by the system,” he concluded.

During a segment of NASCAR Race Hub, Brad Keselowski also shared his thoughts after seeing in-car footage that shows just how violent the hit was and how much Bowman moves around in the car.

Keselowski says, “Well these cars are a lot different than the cars we used to race. For the fans at home, you’ve seen crashes like this pry for the last 10 years, and you go, ‘Oh! No big deal, driver always gets away and they’re fine.’ And for the most part that was always true, Bobby, right?”

Keselowski continued, “This car, Kaitlyn, though is quite a bit different. It’s been designed differently, really from the ground up. And rear impact hits have been one of the things it doesn’t handle quite as well as the previous cars.

“And there’s a number of reasons for that,” he went on. “The way the car’s designed it has some special features in it specifically to the transaxle. … One of our racecars from last year … they had the transmission in the middle of the car. This car has a gearbox in the back also known as a transaxle.”

Keselowski then detailed, “In order to put that gearbox or transaxle in the back of the car NASCAR had to really change the way the car was designed. Effectively they took the rear half of the car and they had to really strengthen it up.”

“For some of the racers at home, they would know this term, it’s actually what’s called an underslung rear chassis. And so it’s significantly more durable, which means when it hits the wall it doesn’t give as much. It’s not as soft as the old cars used to be.

“Which is why when you see these cars drive away from a wreck, you used to see the tail of the car all bent down and mangled and the car would barely even roll,” Keselowski explained. “Now it drove away, Bobby, like nothing was wrong. So big difference between the two cars.”

Keselowski then asserted, “I know NASCAR is working really hard on this right now. In fact, they are actually doing crash study tests here in the next week to find some different opportunities to improve it. Unfortunately, for Alex it didn’t work.

As the segment began to come to a close, Keselowski also indicated that NASCAR did make the rear end stronger compared to the beginning of the year because the transaxle kept breaking.

He detailed, “Backing up, some of our fans at home I’m sure remember earlier in the season at the Clash, the first race of the year, we had a couple cars actually dropped out of the race because the transaxle broke.”

“And the reason why it broke was because the rear clip wasn’t strong enough. So we’ve actually even gone back from the start of the year and made it even stronger to try to make up for this transaxle. I think that’s one of the big causes,” he noted.

What do you make of these comments from Kevin Harvick, Denny Hamlin, and Brad Keselowski?