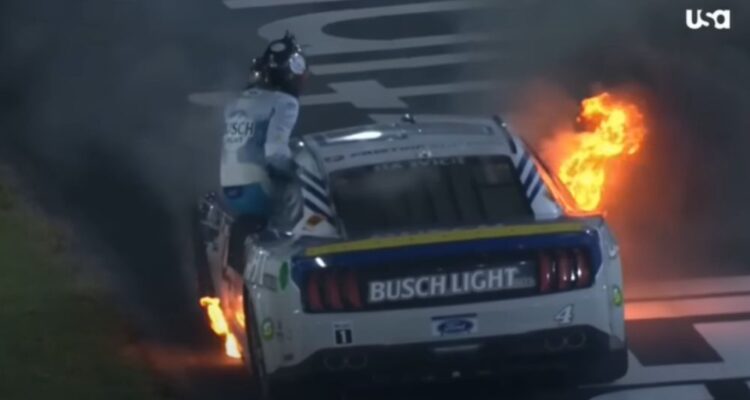 Kevin Harvick Blasts NASCAR For “Crappy A** Parts” After His Car Erupts In Flames, Says “They Don’t Care”

Kevin Harvick was not happy with NASCAR after his car erupted in flames during the Cook Out Southern 500 at Darlington Raceway on Sunday night.

Harvick’s car caught on fire around lap 45 of Stage 3 during the race. In fact, when USA’s camera took note of the fire, Harvick’s entire cockpit was filled with smoke as he tried to bring the vehicle down the track.

Harvick states in his in-car radio, “My rocker panel is on fire.” The fire continues to grow and he eventually brings the car to a stop and quickly leaps from the vehicle right before the fire appears to engulf the majority of the cockpit.

Harvick would vacate the vehicle jumping over the inside wall. The track safety crew eventually arrived and put the fire out with a number of extinguishers.

RELATED: After Failing To Make Playoffs, Bubba Wallace To Race Kurt Busch’s No. 45 Car For Owner’s Championship In Final 10 Races

During the race, Harvick spoke with Marty Snider and explained how the fire started and expressed his frustration with NASCAR, which mandates parts come from specific vendors and that each team is supplied with the exact same parts and pieces.

He began, “I’m sure it’s just the crappy parts on the race car like we’ve seen so many times. We haven’t fixed anything. It’s kind of like the safety stuff, we just let it keep going and keep going. And the car started burning and as it burns, you know, the flames started coming through the dash and I ran a couple of laps and then as the flame got bigger it started burning stuff up.”

RELATED: Kyle Busch Gets Blunt On His Future Says “A Big Change Is Coming”

With his car erupting into flames and eventually being towed back to the garage area, Harvick finished in 33rd. He’s now dead last of the 16 drivers in the playoffs. He’s 49 points behind current leader Joey Logano and 13 points behind Daniel Suárez, who is currently in 12th and occupying the final cutoff spot.

There are still two more races in this segment of the playoffs. The Cup Series heads to Kansas this upcoming weekend. They then head to Bristol on September 17th.

What do you make of Kevin Harvick’s comments and his harsh criticism of NASCAR?

NEXT: Kyle Busch Makes It Clear Payback Is Coming For Ross Chastain