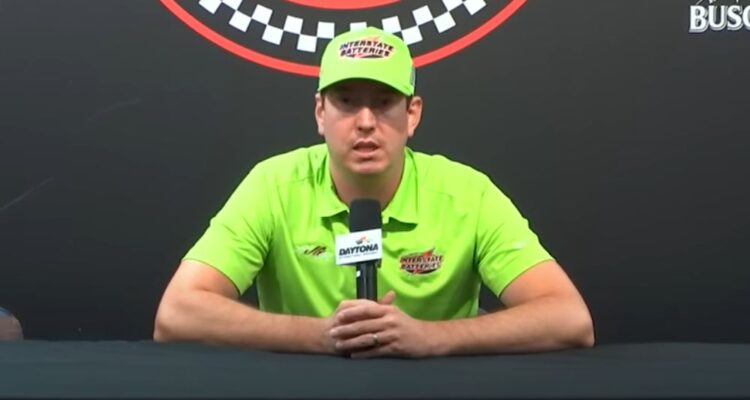 Kyle Busch, the driver of the No. 18 Toyota Camry for Joe Gibbs Racing, made it very clear that Ross Chastain is going to suffer the consequences of his actions throughout the season and will be the victim of payback.

In a pre-race press conference for the Coke Zero Sugar 400 at Daytona International Speedway, Busch was asked about whether he thought Chastain could win the championship and whether or not he would be given the benefit of the doubt with the championship on the line.

RELATED: Kyle Busch Latest To Express Frustration With Ross Chastain After He Gets Spun Out

The two-time NASCAR Cup Series champion answered, “Absolutely, yes, you do. You need give and take to win a championship. Yes.”

He continued, “Will he get benefit of the doubt in situations when it comes to time on the line coming to the end of the playoffs and going to Phoenix, absolutely not. No way. No chance.”

“I don’t think people are paying him back yet just because they are waiting for the right time,” he concluded.

Busch then cracked a joke about Denny Hamlin’s initial payback against Chastain at Pocono when he ran Chastain up the track and eventually forced Chastain into the outside wall.

“Denny got really tight off of turn 1 in Pocono. I know how tight these cars can get. They get tight,” he said.

Following his apparent victory at Pocono that was eventually turned into a disqualification, Hamlin promised more payback to Chastain.

When asked if the feud between him and Chastain was over, Hamlin answered, “We are just going to keep racing hard until we get the respect back from these guys. It’s not just that. We’ve been wrecked four times, twice while leading in the last 10 months. And I’m at the end of it.”

He said, “Ross has a two-page list of guys it seems like. It’s the Cup series, I feel like we’ve seen it in the past. People will make life pretty tough on you.”

Kyle Larson said he was nervous last year when racing Christopher Bell and whether their rift would impact how Bell raced him. On what Ross Chastain faces: “Ross has a two-page list of guys, it seems like. … You’ve seen it in the past. People will make life pretty tough on you.” pic.twitter.com/G2PFd6iOvF

However, he’s not counting Chastain out despite the enemies he’s made over the season, “But he’s done a really good job even when he does get into moments where he has issues with other drivers in the race he still recovers from it really well.”

Larson then hedged, “But I feel like that can only last so long. It will be a cool little storyline to follow throughout the playoffs. I know he’s had pry the fastest car most weekends and him and his team and his pit crew have all done a really good job.”

He then noted, “In my opinion, if they didn’t have people mad at them I think they would be the championship favorite. It will be interesting to see and follow along with. I can’t imagine everybody that seems to be upset with him that it will be an easy playoff for him.”

Larson went on to compare Chastain to a younger Brad Keselowski  and then said, “Ross has had a lot of success being aggressive. And I think the way that the Next Gen cars are and the way the sport really of racing in all forms has progressed I think you have to have that aggression maybe to a point.”

The defending champion then concluded, “I think his aggression is good, but maybe in a 10 race playoff maybe not.”

What do you think Chastain’s chances are with so many people upset at him and promising payback?