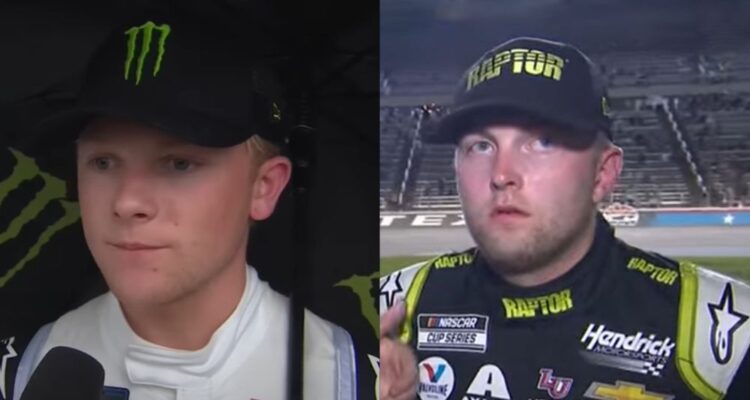 NASCAR issued penalties for both William Byron and Ty Gibbs following their actions at Texas Motor Speedway on Sunday.

Byron was punished with a $50,000 fine and  25-point penalty in both the driver and team owner standings for spinning out Denny Hamlin while the race was under caution after Martin Truex Jr. blew a tire and slammed into the wall.

With the 25 point penalty, Byron drops to 10th in the Playoff Standings and he’s eight points behind Chase Briscoe, who now sits in the eighth and final transfer spot.

Byron indicated on Twitter he will be appealing the penalty. He retweeted Hendrick Motorsports’ tweet, which reads, “We will appeal the penalty issued today by NASCAR.”

It’s unclear what they will be appealing as Byron’s in-car camera clearly shows him running into the rear of Hamlin and sending him spinning into the infield.

After the race, Byron also admitted to making the contact on purpose albeit he said he didn’t mean to spin him out.

“I didn’t mean to, obviously, spin him out over there, but I’m obviously pissed off and just not gonna get run like that. We’ve always run so well or raced so well together so I don’t know what it was all about. I mean the 19 took his air away and he ran out of race track so he chose to run me out of race track completely.”

“And again, look it’s not like it was just light contact. I mean I thought we were going to be done,” he added.

When specifically asked if he ran into him on purpose off of turn four, Byron stated, “I don’t know. I mean, obviously, yeah. I went to go show my displeasure. I didn’t mean to hit him and spin him out. There’s a ton of guys that do this and go do something like that. I see it all the time.”

“I’m just not gonna get run like that. There’s really no reason. We’re running second and third, I think, and had a shot to win. Killed our car for sure. That was a bummer,” he continued.

As for Ty Gibbs, NASCAR fined him $75,000 and docked his No. 23 Toyota team 25 points in the owner standings. He was not docked any driver’s points because he does not collect any in the Cup Series since he’s a full-time Xfinity driver.

Gibbs’ punishment comes after he retaliated against Ty Dillon while on pit road and drove Dillon’s No. 42 close to a number of pit-crew personnel for Chris Buescher’s team as well as NASCAR officials.

Unlike Byron, Gibbs will not be appealing the punishment. He issued an apology via Twitter. It reads, “I want to apologize for what happened on pit road during the race Sunday. I have to have a better understanding of the situation and my surroundings. I’m thankful no one was injured and will learn from it.”

Erik Jones, the driver of the No. 43 Petty GMS car and the teammate of Ty Dillon seemingly wasn’t buy Gibbs’ apology as he responded, “Don’t ever bump me under yellow again.”

And there’s good reason not to buy into Gibbs’ apology given he’s done it time and time again and his actions on the track have seemingly not changed.

Back in April, NASCAR penalized him $15,000 after he rammed Sam Mayer’s car while it was stopped on pit road at Martinsville in April. The contact came after Gibbs was run up the track by Brandon Jones and then roughed up further by both Sam Mayer and Landon Cassill. Coming to the checkered flag, Gibbs would smack the outside wall.

He then followed Mayer to the pits where he rammed his car into the rear of Mayer’s and the two got into a fight with Gibbs keeping his helmet on.

Earlier in September at Kansas Speedway, Gibbs issued an apology after he retaliated against Justin Allgaier during the Xfinity Series race.

During the final restart Allgaier drifted up the track and made contact with Gibbs left front fender. The contact saw him brush the wall slightly. He then drove his car down the track and slammed into the door of Allgaier’s No. 7.

After the race, Gibbs issued an apology saying, “You know we have a very fast Reser’s Toyota Supra, I feel like we were good, just got into a weird restart line when the three guys stayed out. I just took the wrong line. I thought it was the right line and it wasn’t and then we went back racing and off of four I made contact with Justin. I feel like I hit the wall harder than I did, and I didn’t.”

He continued, “I got mad and hit him on the door and the stupid part is it hurt my car more than it did to his. I feel like his car is okay but, they’re gonna have to put a door on it when they get back to the shop. It’s just inexcusable for me and I’m very disappointed in my actions and I apologize to them.”

What do you make of the penalties doled out by NASCAR to Ty Gibbs and William Byron?