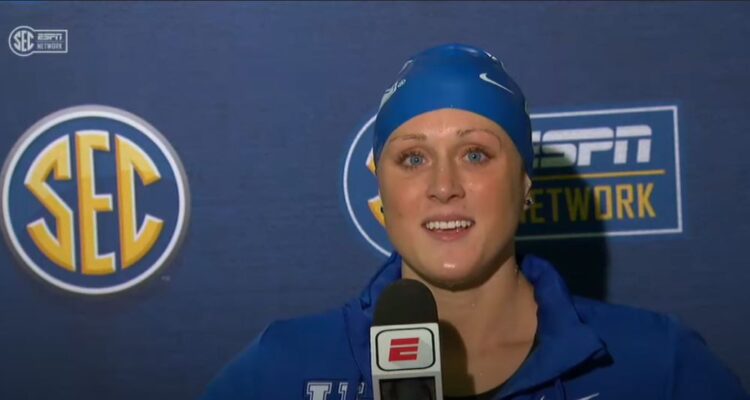 Riley Gaines Testifies That NCAA Allowed Man To Expose Himself To Her At Swimming Championships, Denounces Biden Administration

A former NCAA women’s champion swimmer is speaking out against the Biden administration’s attack on Title IX and women’s sports.

University of Kentucky swimmer Riley Gaines wrote a piece for Fox News that centers around her experience as a female swimmer having to compete against a biological male, University of Pennsylvania swimmer Lia Thomas.

Gaines speaks of the incredible amount of dedication it takes for her and others to reach their athletic goals, “As one of the top swimmers in the county, I know achievement does not happen by accident. It takes work, dedication, perseverance and time. I learned this as a little girl, waking up at 4:30 a.m. to go to swim practice and then returning to the pool that afternoon to pursue my goals. I learned it as a college student who finished my career as a 12-time NCAA All-American, five-time SEC Champion and record holder, and two-time Olympic trial qualifier.”

RELATED: Women’s Swimming Champ Riley Gaines Shoots Down Lie That She Tried To ‘Dodge A Kiss’ From President Trump

Gaines noted the previous work to promote women’s sports and the positive impact it has had “Fifty years ago, pioneering women and men fought for Title IX’s passage. They knew their efforts would pay off by giving girls and women like me the opportunity to have our own sports category protected under federal law. The results have been profound. An entire youth sports ecosystem for girls has blossomed, giving countless females the same chance to develop skills critical to achieving equality in the workplace with their male counterparts. A recent Ernst & Young study found that fully 94% of female business executives participated in sports as girls — making sports participation the most straightforward path to business success as an adult.”

All the progress that has been made is now under threat by so-called “progressives.” Gaines outlined her own struggle having to not just compete against, but share a locker room with a biological man. “Under Title IX, women are entitled to their own locker rooms so that we can be vulnerable and change in private. Yet at the NCAA Championships, I saw a 6’4″ biological male exposing male parts in our women’s locker room. To be perfectly clear, the anatomy I and many other women were forced to view, confirms Thomas is a male.”

Gaines continued by pointing out the obvious but controversial fact that men are on average physically stronger than women.

“Physiological development as a biological male yields tremendous advantages over biological women in athletic competition. On average, men have over a 10% advantage across the board on strength, agility, and stamina versus women in the same category. The male body is developed from the womb to be the physically stronger and more athletic of the two sexes…”

Despite all this, Gaines and other female swimmers were forced to compete against Lia Thomas a biological man who transitioned to female after competing on UPenn’s men team for three years.

Lia’s own teammates recognize that Thomas can only compete because she’s a man swimming against women, “Lia was not even close to being competitive as a man in the 50 and the 100 [freestyle events]. But just because Lia is biologically a man, [Lia] is just naturally better than many females in the 50 and the 100 or anything that [Lia] wasn’t good at as a man.”

Men have an advantage over women when it comes to physically demanding sports. This should not be a controversial statement.

Allowing someone who is biologically a man to compete against women is a slap in the face to female athletes and puts the very existence of women’s sports at risk. Hopefully more women like Riley Gaines have the courage to speak out against this injustice.