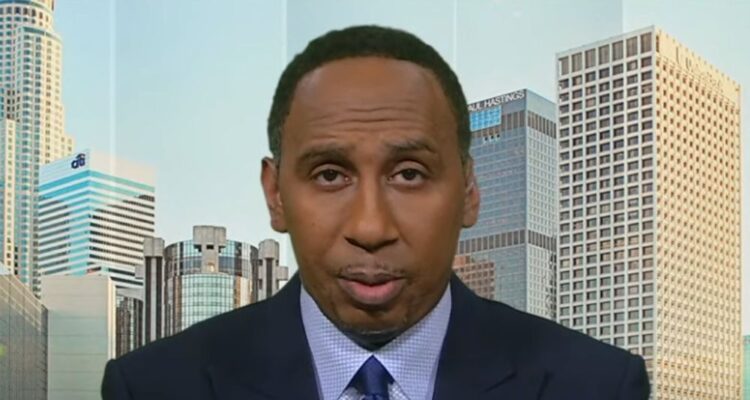 Stephen A. Smith Does A Complete 180 On His Rachel Richardson Comments After BYU Investigation Finds No Evidence Of Racial Heckling

ESPN host Stephen A. Smith did a complete 180 degree turn regarding his comments about Duke University Volleyball player Rachel Richardson following a BYU investigation determining that they could find no evidence that she was racially heckled during a volleyball game at the end of August.

In a statement posted to Twitter, Richardson claimed she and her African American teammates “were targeted and racially heckled throughout the entirety of the match” against BYU.

She added, “My teammates and I had to struggle just to get through the rest of the game, instead of just being able to focus on our playing so that we could compete at the highest level possible.”

She went on to lecture BYU writing, “This is an opportunity to dig deep into closed cultures which tolerate amoral racist acts, such as those exhibited Friday night, and change them for the better. It is not enough to indicate that you are not racist, instead you must demonstrate that you are anti-racist.”

In an interview with ESPN’s Holly Rowe, Richardson provided more details about the alleged targeting and racial heckling saying, “At the end of the second set I had gone back to serve and they heckled throughout the entire game. That’s just a part of sports. You get used to playing through extreme environments like that.”

Richardson continued her telling of events, “So we switched sides and I went to a teammate that I’m super comfortable, super close with and I told her what had happened and immediately she was like, “Alright, let’s go tell coach.’ She came with me, we told our coaches, and they went to the officials.”

“The officials, we saw them speaking with the BYU staff and then we were told someone was speaking to the student section, and I was alright, and that was the end of it,” she detailed. “We played our third set on the opposite side of the net from them. And then in the fourth set we went back to that side, it was almost as though the atmosphere of the student section had changed.”

Smith initially reacted to Richardson’s accusations, “I’m actually glad. I’m not glad it happened to her, but I am, Rachel Richardson, but I am happy that something like that happened. Why would I be? Why in God’s name would that be okay with me?”

He then answered his rhetorical question, “Who’s thinking about going to BYU now? There’s a lot of people that’s going to change their minds about that. If you are BYU you are in the eye of the storm now. … So what’s your student body like? What’s your faculty like? What’s your administration like? I don’t know the answer, but there’s a whole bunch of people that they think they do now that we heard about this and how you elected to handle it.”

“See, change is what this is all about,” he continued. “See, when you are doing what you do whatever that may be and you are able to be clandestine with it and hide in the dark and nothing ever happens to highlight and illuminate a culture that is taking place, you are able to sustain it and it lives in perpetuity because nobody ever gets to address because there is no cause to do so.”

“Now, there is. And because there is, you are BYU, let’s just say you ain’t the most attractive place for folks to come,” he began to raise his voice. “That ain’t the most attractive institution to be apart of right now. Now, that’s not the fault of everybody at the institution. I’m not trying to put a blemish on BYU. I’m saying BYU, you did it by allowing to this happen and not addressing it.”

An investigation into Richardson’s accusations by BYU Athletics found no evidence to support her claims.

BYU Athletics shared the results of their investigation stating, “YU has completed its investigation into the allegation that racial heckling and slurs took place at the Duke vs. BYU women’s volleyball match on August 26. We reviewed all available video and audio recordings, including security footage and raw footage from all camera angles taken by BYUtv of the match, with broadcasting audio removed (to ensure that the noise from the stands could be heard more clearly).”

They concluded, “From our extensive review, we have not found any evidence to corroborate the allegation that fans engaged in racial heckling or uttered racial slurs at the event.”

Following the results of this investigation, Smith’s tune changed dramatically.

He responded, “Well, first of all you can take it one of two ways. You can either believe BYU and take them at their word or you can be a bit cynical and skeptical about them drawing this conclusion, questioning what level of veracity should we attach to them. Pick your side.”

Smith continued, “As it pertains to the Duke player, she says she heard what she heard. She spoke about it with passion. We don’t have any reason to believe her. Duke has given the impression that they completely believe her, and in BYU’s statement they certainly did not accuse her of lying. They simply said they found no evidence.”

He went on, “In the end it comes down to this. … Racism, prejudice still exists in this country. We all know it. We know how prevalent it is. And we know that it is something that completely needs to be eradicated. Having said that we are not doing ourselves any favors if we bring it up and broach it when it doesn’t exist. And that’s the key that we need to focus on.”

“I’m not saying that that Duke player’s allegations or assertions were false. I don’t know. She says it. I’ll be damned if I’m not giving her the benefit of the doubt,” Smith noted. “But I wanted for future reference for everybody to understand that when we’re willing to jump to race too quickly what we do is we dilute the profound argument of racism and prejudice when it really, really occurs.”

“Because people are hearing it so much they think we’re whistling into the wind. So it’s something that we need to be mindful of and we need to make sure that when we make those assertions or those allegations about other people that they’re as close to irrefutable as we can get. So nobody’s accusing us of making something up,” he concluded.

Of note Smith never apologizes for his previous comments. And whether or not Smith will take his own advice is also suspect. If he’s not willing to apologize, it’s more than likely he will continue to push race hoaxes and then issue a statement after the fact as he’s done here without actually changing his behavior.

As Matthew 7:16 reads, ““Beware of false prophets, who come to you in sheep’s clothing, but underneath are ravenous wolves. By their fruits you will know them. Do people pick grapes from thornbushes, or figs from thistles? Just so, every good tree bears good fruit, and a rotten tree bears bad fruit. A good tree cannot bear bad fruit, nor can a rotten tree bear good fruit. Every tree that does not bear good fruit will be cut down and thrown into the fire. So by their fruits you will know them.”

What do you make of Smith’s abrupt change in rhetoric following the BYU investigation?

NEXT: CNN Host John Avlon Calls Out His Own Network, University Of South Carolina’s Dawn Staley, And LeBron James For Pushing BYU Racism Story, Doubles Down On Systemic Racism Narrative