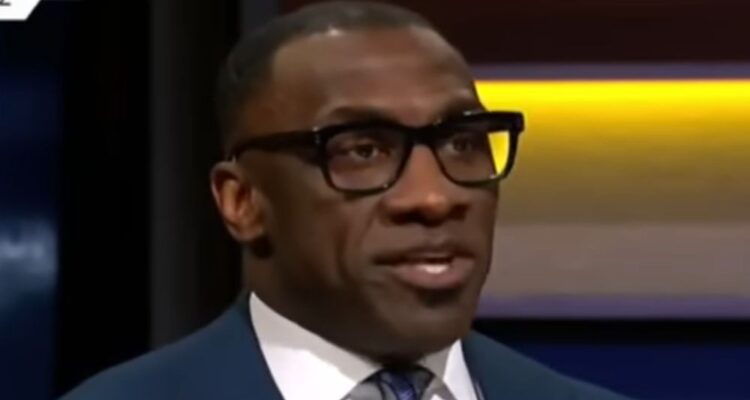 During a segment of Skip and Shannon: Undisputed, Sharpe responded to a clearly leading question claiming that Aaron Rodgers admitted to lying to the media about his vaccination status last year.

Sharpe ran with the leading question and doubled down on it saying, “Look, he can use all the semantics that he want to, Skip. He lied. And he purposefully lied because he thumbed the nose because he didn’t like the NFL’s policy.”

“And he want to blame the woke and the cancel culture. No. This was all about Aaron Rodgers thinking that the NFL Covid policy was not applicable to him. Nothing more, nothing less,” he proclaimed.

Sharpe then hardened his attack on Rodgers’ character, “Look, there’s no denying the guy’s talented, Skip. He’s a top five quarterback. When it’s all said and done you can make a case he might be a top five player if he can get another championship. But as a person he’s a horrible person. He’s a liar. He’s arrogant. He’s aloof. For lack of a better word he’s a prick. And I’m so over him.”

“Skip, this was done,” he continued. “Nobody was even talking about Aaron Rodgers and what he lied about last year or what he deliberately misled about. He went on there to rehash that because he wants to thumb his nose. ‘I did that NFL and I’d do it again.'”

“When he retires it might be one of the handful best days of my life because I am so sick of talking about his bulljive,” Sharpe concluded. “On the field he’s sensational, but off the field I got nothing for it.”

Bayless then chimed in, “I appreciate the way you’ve seen the light about this man. The man you just described will ultimately fail as the leader of a football team. As the face of a franchise it’s hard to trust him, it’s hard to depend on him, it’s hard to follow him into battle because if you played for him you would have come to this conclusion and deep down inside even though he is your quarterback there’d be a little part of you saying, ‘Nah. Nah. Don’t trust him. Don’t follow him.'”

“It’s almost like they’re stuck playing with the best quarterback in football,” Bayless bizarrely continued. “The transcendent thrower of the football lacks probably every intangible Brady has to me. In this position of all the positions in all of sports is I’m going to say half intangibles, but it might be two-thirds intangibles. The quarterback position. And Brady’s all about intangibles. He’s got a really nice arm; it’s an above average arm, but he has no mobility.”

Interestingly, Bayless would then seemingly reveal he didn’t even watch Rodgers’ discussion with Joe Rogan, “So, my takeaway from his remarks is I’m pretty sure he’s saying, ‘Yeah, I lied to the media, but how dare the media call me a liar.’ That’s what he’s saying here if I read it correctly.”

Rodgers explained to Joe Rogan, “I knew that this was coming down. That at some point I was going to talk about my status because I had chosen to not get vaxxed for reasons that you talked about on your show and I talked about on…”

Rogan and Rodgers then reveals that Rodgers is  allergic to polyethylene glycol (PEG), an ingredient in the vaccine.

Rodgers elaborated, “So I did my research. I think typically speaking because I’m healthy and I take care of myself, getting vaccinated was not on the top of my list, but I wanted to look into it because everybody was doing it, and talking about it, and trying to be safe, and I wanted to make sure I was doing my part if that was necessary to keep my self safe, my loved ones safe, and my teammates safe.”

“Then I looked into it and at the time I went on the CDC website and they specifically said if you’re allergic to PEG we do not recommend you get vaccinated with the mRNA vaccinations,” he explained. “So the only other one available is Johnson & Johnson and it has just got pulled at the time for blood clots.”

“So I looked into other options which included an immunization process through a holistic doctor and I researched and talked to probably a dozen different MDs and found a protocol that I felt like was the best available,” he continued.

Rodgers went on to explain the immunization protocol, “It involved basically a couple month process of taking a diluted strand of the virus. So I was doing basically what the vaccine was supposed to do without — I don’t know the exact way that they did that but — it was oral and…”

“But there was hundreds and hundreds if not thousands of people that I knew in this circle that were using, that had been doing this to protect ourselves because we were thinking, ‘Hey look, for me I didn’t want to risk anaphylactic shock or any type of clotting associated with the vaccine.’ So that was my only option either do nothing or do this process and I felt like that this was the best way to protect myself and my teammates. And the NFL would understand and maybe grant me a waiver,” he told Joe Rogan.

RELATED: Aaron Rodgers Says The NFL Threatened To Not Pay Players And Force Teams To Forfeit Over Vaccination Status

From there Rodgers discussed the two-tier system the NFL implemented for unvaccinated and vaccinated players and revealed he got Covid from a vaccinated individual after attending a Halloween party.

Rodgers eventually turned the conversation towards the media explaining they were on a witch hunt to determine whether or not players were vaccinated or not. “So I’d been ready the entire time for this question and had thought about how I wanted to answer it. And I had come to the conclusion that I’m going to say, ‘I’ve been immunized.’ And if there’s a follow-up then talk about my process.”

“But thought there’s a possibility that I say I’m immunized maybe they understand what that means, maybe they don’t, maybe they follow up. They didn’t follow up,” he stated.

Rodgers continued, “So then I go the season them thinking, some of them, that I was vaccinated because the only follow-up they asked was basically asking me to rip on my teammates like, ‘What do you say to your teammates who are unvaccinated? Like what kind of example do you feel like you’re setting to your teammates who are unvaccinated?’ And I said, ‘Hey, it’s everybody’s own decision with their body and we’re super healthy individuals and we take care of ourselves. We understand what goes in our bodies and I don’t have any judgment on any decision that a guy makes with their own body.”

“But I knew at some point if I contracted Covid or if word got out because it’s the NFL and there’s leaks everywhere it was possible I would have to answer the questions,” he relayed. “And then sure enough I contract Covid at the beginning of November, the end of October. And that’s when the s*** storm hit because now I’m a liar. I’m endangering the community, my teammates, all these people. The attempted takedown of me and my word and my integrity began.”

He later said, “But the protocols was you’re off for 10 days. So I missed a game. We lost a football game. I had to answer a ton of questions about it. Basically, I lost the majority of allies I thought I had in the media. The good thing is it drew a real line in the sand and everybody who wanted to jump on me and trash me did and showed their true colors and very few people in the media at least stuck by me,” he asserted.

Clearly, Rodgers never admitted to lying, so the whole assumption the entire conversation that Sharpe and Bayless have is based off a lie.

Nevertheless, it appears that both Sharpe and Bayless made it abundantly clear where they stand if they hadn’t done so already because not only did they engage with the bad faith question, but they took the opportunity to viciously and immorally attack Rodgers’ character.

They are the ones lying about Rodgers. Not the other way around.