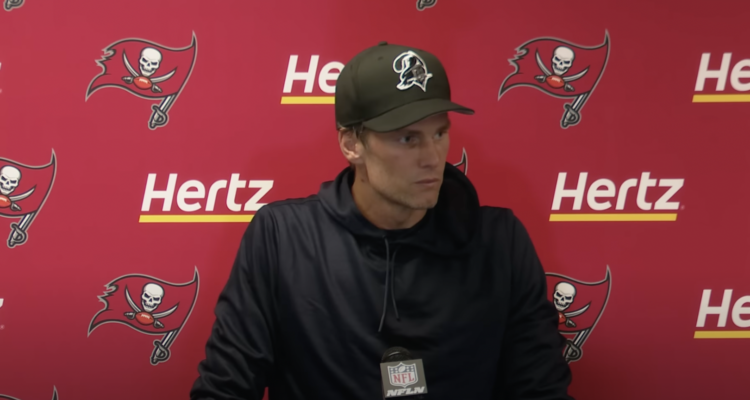 Fitzpatrick recently explained why he dislikes Brady and why the NFL legend annoys him on a recent episode of the “Pardon My Take” podcast.

Fitzpatrick asserted that he believes Brady was talking about him when when he appeared on The Shop and said, “There was a story in free agency. One of the teams, they were interested and all of a sudden they weren’t interested at the very end. I was sitting there thinking, ‘You’re sticking with that motherf*****? Are you serious?'”

Brady added, “When I look I’m like, ‘There’s no f***ing way I would have went to that team. But they said they didn’t want me and I know what that means. I know what that feels like and I’m gonna f*** you up because of that.”

When the Pardon My Take hosts assert that Brady was referring to Derek Carr and not Fitzpatrick, Fitzpatrick disagrees saying, “No, it had to be me.”

He went on to detail that Brady gives him “zero respect,” and that “he would never shake my hand.”

“I mean I’ve told this story before, but he just pisses me off,” said Fitzpatrick. “Because you’re in Buffalo, you’re playing New England, they’re kicking our a** every single year, they’re beating us. We finally in 2011 knock them off. It was right at the beginning of the season. We had this great start, and he threw five interceptions in the game, which was just wonderful to see. Every single one of them. Wonderful to see.

RELATED: Tom Brady Previously Described His Wife Gisele Bündchen As A “Witch” And Detailed How She Engaged In Numerous Rituals

“And [Brady would] run straight off. Like, no handshake, no quarterback middle of the field, no, ‘Where are the cameras? OK, hey, stay healthy buddy.’ Pat me on the head and let me go. Just ran straight off. So it bothered me so much because there was no respect there. Every time I played him after that, I was like ‘All right, let’s make this dude respect me.'”

A week after Fitzpatrick’s remarks, Brady appeared on the Let’s Go! podcast where he made his own comments about Fitzpatrick.

“Oh God, not this again. Yeah, go ahead. Let’s talk about Ryan. And I love Ryan, but for some reason, he’s got it out for me,” said Brady. “I actually talked to Ryan Griffin, who’s one of our quarterbacks, and he said, ‘Ryan’s always all over you. I don’t know why.’ So I don’t know why Ryan is. Maybe Ryan and I need to have a talk.”

Brady continued, “Ryan’s a hell of a guy too. I’ve competed against him. I mean he’s a Harvard guy and now he looks like he’s part homeless. And now he’s on TV doing what my future job’s gonna be. So I think Ryan’s got a good thing going. I’m not sure why he needs to think that I’m after him or something like that,” said Brady.

Brady also confirmed that Fitzpatrick was not the unnamed player he discussed during his appearance on The Shop.

“I like to keep ’em guessing,” said Brady. “Unfortunately with this coming out, I’d have to tell him, it wasn’t him.” Laughing Brady said, “Let the guessing games begin.”

When confronted with the idea of the Let’s Go podcast whittling down the quarterbacks one by one every week, Brady responded, “You know what, sometimes I’m a little facetious, sometimes people take me a little too literally. And I think my guy Maverick, he actually gave me some tequila before that show when I was on The Shop so I was a little more — I spoke a literal more liberally than I probably would.”

Brady was then asked what Fitzpatrick will have to talk about now that he’s confirmed he wasn’t talking about him on The Shop.

He answered, “I’m going to have to make him work a little bit harder. Like I said, he’s a Harvard guy, it shouldn’t be too hard with that. He should find plenty of other things to talk about.”

Do you think Fitzpatrick has some legitimate grievances or is he just trying to pick a fight with Brady to get some attention? Let us know in the comments below.

NEXT: Gisele Bundchen Shows Support For Tom Brady And The Tampa Bay Bucs Amid Wild And Rampant Rumors Regarding Their Marriage