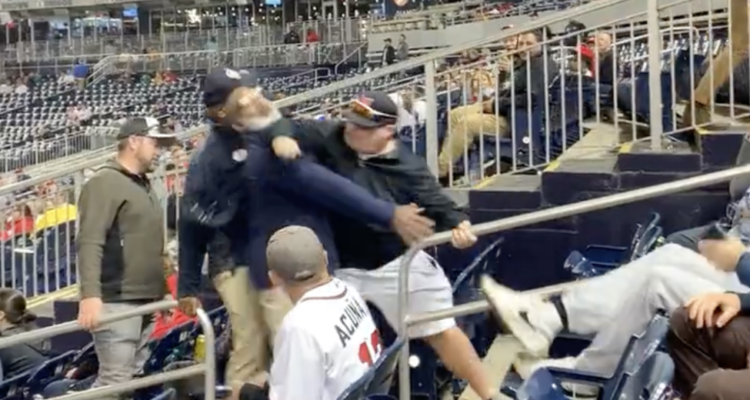 Fans witnessed more than just a baseball game at National’s Park this week when a violent altercation broke out between a fan and a stadium usher.

According to reports and footage of the scene which were uploaded to Twitter, an usher and another park employee attempted to have a fan removed from his seat during the ninth inning, but the fan protested right before things escalated.

As seen in the video, fans sitting in the section began to chant “get him out” while the fan in question continued to refuse the usher’s directions. At first, the fan attempted to dance as a way of mocking the others in the stands chanting to have him removed, but then as he was being escorted up the stairs he appeared to take issue with the way one of the ushers was ushering him. The two then get into a brief verbal squabble before he continues to walk up the stairs.

As he’s walking up the stairs he’s then confronted by another man, who consistently motions with his hand in a get out signal. The ushers then step in and begin to physically move the guy back up the stairs. The man gets into another verbal spat with the ushers before he again begins to walk up the stairs.

As the usher begins to his body to move the man up the stairs, he throws a right forearm into the usher’s face, knocking his hat from his head. As the usher attempts to subdue he begins to bite his hand.

.@MLB @Nationals should have zero tolerance for punching and biting an usher. Ban this asshole for a long, long time. pic.twitter.com/0pxyIFfPJO

Luckily, Metro Police quickly arrived to prevent the fight from getting any worse and arrested the fan while providing the usher first aid.

Police documents which were obtained by TMZ Sports show that the fan was “arrested for simple assault.” TMZ reports the documents note that the usher was “bleeding from his right hand following the altercation, though they said he refused further treatment after the initial evaluation.”

Blood can be seen streaming across the fan’s head towards the end of the video as well.

The police also state that the root of the situation which led to the assault began because the fan was attempting to sit in a section he wasn’t ticketed for, and became upset when the usher informed him he would have to leave and go to the section he was supposed to sit in.