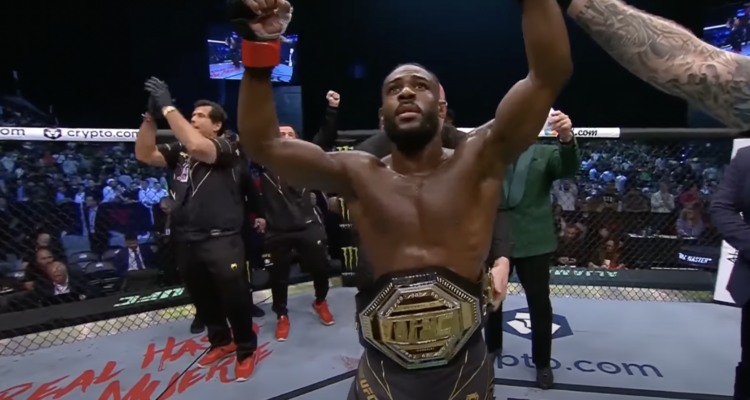 Aljamain Sterling retained his title in a dominant win over TJ Dillashaw during their fight last Saturday.

The fight itself was a bit anticlimactic. Dillashaw dislocated his shoulder early in the fight, and never recovered. Sterling put a beating on the one-armed Dillashaw until the fight was stopped in the second round.

Appearing on Ariel Helwani’s MMA Hour on Monday, “Funkmaster” went over some of the potential challengers for his next title defense. The list included superstar Sean O’Malley, who beat former champion Petr Yan by split decision on Saturday, as well as contenders Chito Vera and Cory Sandhagen. It also included retired former two-division champion Henry Cejudo.

Helwani asked Sterling for his opinion on Cejudo potentially returning to challenge for the belt. After a second-round TKO of Dominick Cruz at UFC 249, Cejudo shocked the world by announcing his retirement in the cage. Cejudo has not competed since then, but has remained vocal on social media. “Triple C” has repeatedly called for matchups with Sterling and featherweight champion Alexander Volkanovski.

Sterling aired out a few criticisms of White’s comments to Helwani.

“I like Dana on a personal level, outside of the cameras and everything, I like Dana,” Sterling said. “But some of the things he actually says are beyond me sometimes. You go on record, you say whoever wins [the O’Malley-Yan] fight is clearly getting the No. 1 shot because it makes sense. After the fight, everything completely changes and then you throw Henry ‘Cedoodoo’ in the mix and I’m just completely confused because this guy hasn’t fought in over two years.”

“So now it’s like I almost feel—and I could be completely wrong—I almost feel like they’re looking for a last hope of someone who can take out Aljamain Sterling,” Sterling continued. “They’re hoping that they can make this narrative of the Olympic wrestling now. D-1 wasn’t good enough, now the Olympic wrestling might be good enough to take out the D-3 wrestler. But I can tell you one thing for certain, this ass-whooping is an equal opportunity employer. All races, all colors can get it. It really doesn’t matter. If it’s Henry, if it’s ‘Chito’ [Marlon Vera] from Ecuador, if it’s O’Malley with the colorful hair, Mr. Sugar T***, if it’s a rematch with Yan because we know the UFC likes to give title shots to people coming off of losses, if they want to give it to [Cory] Sandhagen, there’s plenty of options.”

The biggest problem with Sterling’s position here is that White is not the only one interested in a Sterling-Cejudo matchup. Sterling himself mentioned it in the cage on Saturday night. In fact, Cejudo was the first person Sterling mentioned when asked about potential challengers. If Sterling did not think Cejudo deserved a title shot, why bring his name up at all?

It’s no secret that the UFC and Sterling have not always seen eye-to-eye. Their rocky relationship dates back to Sterling’s days as a contender. When Cejudo vacated the belt in 2020, Sterling was on a 4 fight win streak and thought he deserved a title shot. The UFC decided to match up Petr Yan and Jose Aldo, who at the time was 0-1 in the division, for the belt. While Sterling ended up getting a title shot after beating Cory Sandhagen, he still felt slighted.

Since then, Sterling has had an up-and-down relationship with both MMA fans and the UFC brass. His polarizing personality rubs some, including Dana White, the wrong way. In an interview with The Mac Life during UFC 280 fight week, White gave his take on Sterling.

“When you’re one-on-one with Aljamain, he’s a great kid,” White said. “When he gets out in public… he doesn’t do himself any favors, let’s just put it that way.”

Comments like that may be the reason Sterling feels like the UFC has it out for him, and wants to give him a tough opponent like Cejudo that they think can end his reign. However, a more charitable interpretation might suggest that Sterling-Cejudo is an intriguing stylistic matchup. Both are credentialed wrestlers with a diverse MMA skillset that would make for an exciting fight.

It’s not clear what direction the UFC will go with the 135 pound title. There are plenty of contenders, but no one in the clear number one slot.

What do you think of Sterling’s comments? Is Cejudo next for him?