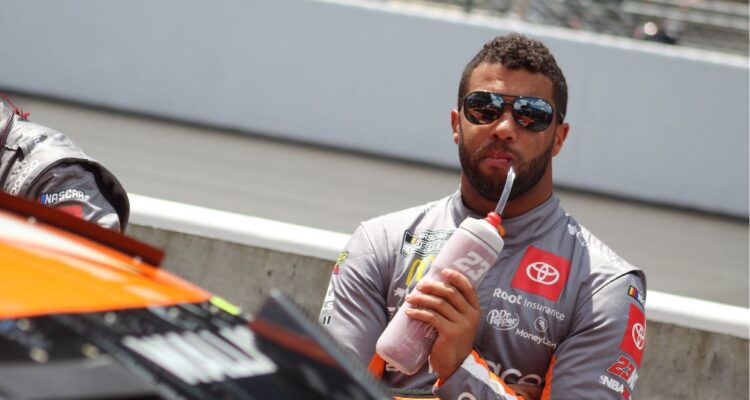 Bubba Wallace’s name was removed from his car after he was suspended by NASCAR for intentionally wrecking Kyle Larson during the South Point 400 at Las Vegas Speedway.

NASCAR suspended Wallace one race for his on track actions that saw him intentionally wreck Kyle Larson and send him spinning into the outside wall.

It all started when Larson dove deep into Turn 3 going three-wide with Kevin Harvick and Wallace. Harvick got out of the middle and backed out. Larson began chasing his car up the track and squeezed Wallace up against the wall.

RELATED: Kenny Wallace Tells The Truth On NASCAR: “This New Car Is Hurting Drivers, It’s Ending Their Careers, And It’s Putting Them In The Hospital”

However, Larson never made contact and Wallace stayed in the gas slamming his own vehicle into the outside wall. After hitting the wall he bounced down into Larson, who quickly dove to the bottom of the track. Wallace chased him down the track and hit him in the right rear quarter panel sending him spinning up the track and into Christopher Bell and the outside wall.

Wallace would also wreck hitting the outside wall nose first.

NASCAR’s Chief Operating Steve O’Donnell explained the one race suspension during an appearance on SiriusXM NASCAR Radio, “Our actions are really specific to what took place on the racetrack. And when we look at how that incident occurred, in our minds, a really dangerous act. We thought that was intentional and put other competitors at risk. And as we look at the sport and where we are today and where we want to draw that line going forward, we thought that definitely crossed the line and that’s what we focused on in terms of making this call.”

After NASCAR’s decision was announced, 23XI Racing, the team that Wallace races for, issued their own statement noting they concurred with NASCAR’s decision and that John Hunter Nemechek would be driving the No. 45 car at Miami-Homestead Speedway.

Their statement reads, “23XI is aligned with NASCAR on the one-race suspension issued to Bubba and we understand the need for the series to take a clear stand on the incidents that took place at Las Vegas Motor Speedway. ”

“As a result of the penalty, John Hunter Nemechek will drive the No. 45 Toyota this weekend at Homestead-Miami Speedway,” the statement concluded.

The 23XI team took to Twitter to share their Columbia paint scheme on the No. 45 Toyota Camry.

First look at the fresh @Columbia1938 scheme for the weekend 🎣

Pockrass would further reveal that Wallace’s name was removed from his car and replaced with John Hunter Nemechek’s name.

Pockrass wrote, “Unlike the way teams often leave a driver’s name above the door when the driver is injured, the 45 Cup car has Nemechek’s name over the doors and on the front windshield and back windshield as Nemechek replaces the suspended Wallace this weekend at Homestead.”

He also shared a photo of the car with Wallace’s name nowhere to be found on the car. Instead you can see Nemechek’s name alongside a pink ribbon for breast cancer awareness, a cross representing Christ’s sacrifice for humanity, and the flag of the United States of America.

Not only will Nemechek be filling in for the suspended Wallace, he is also racing in the Truck Series, where he is currently five points behind the Playoff cutoff.

He spoke to Pockrass about his busy weekend saying, “First task at hand is to go advance to Phoenix, here in the Truck Series. I’m excited that we’re at Homestead rather than Martinsville, somewhere where I feel you can’t really control your destiny, but Homestead has been a really good race track for me. Tires fall off a lot and you continue to move around.”

Speaking specifically to the Cup race he said, “Hopefully running the Cup car tomorrow morning will just be a warm-up before the truck race and can get things going, blood moving, and then go focus on Sunday in the 45. And just try to have a solid run for 23XI and Bootie, and all the guys. They’ve been fast here recently. Hopefully, I can live up to that same standard.”

John Hunter Nemechek enters Homestead five points behind the cutoff in trucks as well as the substitute driver for Bubba Wallace in Cup. How he is approaching this weekend and the opportunity: pic.twitter.com/y7sv2sMACa

What do you make of Wallace’s name being removed from the car and replaced with John Hunter Nemechek’s?