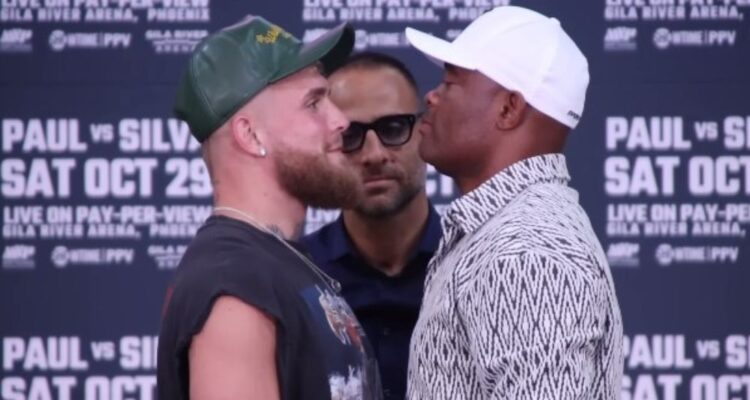 Jake Paul and Anderson Silva via The Mac Life YouTube

We now know how much it will cost fans to see Jake Paul box Anderson Silva on PPV.

Jake Paul’s upcoming boxing match will take place against former UFC Middleweight champion Anderson “The Spider” Silva and fans will have to pay $59.99 to watch the match on Showtime PPV.

The fight takes place on October 29th from the Desert Diamond Arena in Glendale, Arizona. Paul will take on Silva for his 6th professional boxing match at a catchweight of 187 pounds in a bout scheduled for eight rounds.

Paul is coming off of last December’s knock out victory against former UFC Welterweight champion Tyron Woodley. Paul is looking to defeat his third former UFC fighter in his early boxing career.

Paul has yet to fight someone with previous boxing experience.

Silva who is 47 years old, is currently 3-0 in boxing. After leaving the UFC in 2020, Silva reentered the boxing world after leaving for MMA in 2005. In his post-UFC boxing appearances, Silva won a split decision over Julio Cesar Chavez Jr. and knocked out Tito Ortiz.

Paul who is 25, previously attempted to schedule bouts against boxers Tommy Fury and Hasim Rahman Jr. but both fights were canceled when Paul’s opponents pulled out due to not coming to terms for a fight. Jake Paul expects a ton of interest in his boxing match with Anderson Silva once fight night rolls around.

Also fighting on the card is Ex-NFL All-Pro running back Le’Veon Bell. He will face former UFC fighter Uriah Hall. Bell and Hall are slated for a 4-round bout at a contracted 195 pounds. Neither competitor can exceed 200 pounds on weigh-in day, and they will wear 10-ounce gloves.

“I do think this will be the biggest pay-per-view (of my career),” Paul told MMA Junkie on Wednesday. “I would be happy with anywhere from 300-500,000, but I think it can get up anywhere to like 600 or 700,000, depending on how the fight week goes and the promotion and if ‘All Access’ performs well. I think this could be the biggest one for sure.”

Here’s the full pay-per-view main card as it stands:

Who do you think wins on the 29th?

NEXT: Celebrity Boxer Jake Paul Says People Who Voted For Joe Biden And Don’t Regret It “Are The American Problem”