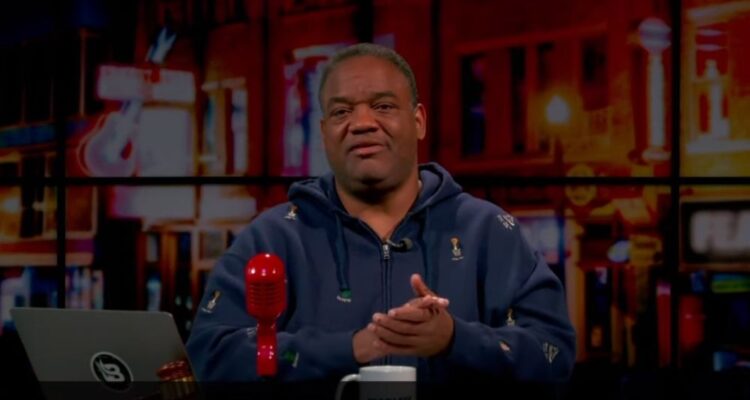 Jason Whitlock reacted to the NHL’s recent report claiming that they have too many white employees and will be working to change that in future.

The NHL released their Accelerating Diversity & Inclusion report that claims the organization and its clubs are made up of 83.60% white people and 61.86% men.

As part of the introduction to the report, NHL commissioner Gary Bettman stated, “Recognizing these facts, we are working to better understand and accelerate our engagement across all layers of diversity – including nationality, race, gender identity, sexual orientation, disability, and religion – and their nuances and intersections. At the same time, when there are incidents that violate inclusivity in hockey or barriers that negatively impact the participation of underrepresented groups, we are committed to reckoning with those difficult moments as opportunities to demonstrate our values and create a better future.”

He further stated, “During the re-ignited movements for social justice over the past few years, particularly following the murder of George Floyd, our initial response was to listen and learn. This response ultimately led to new ways of thinking and new internal competencies that, in many cases, built upon work that had been growing across the hockey community. Since January 2020, the League Office and all 32 NHL Clubs have united to strengthen diversity and inclusion (D&I) with new urgency, pursuing a variety of initiatives to make this great game more welcoming,
inclusive, accessible, and socially conscious. To accelerate our progress, we created a ‘7 Dimensions’ framework to promote D&I at every level of the sport — spanning leadership, education, employment, marketing, partnerships, participation, and community engagement.”

The NHL’s Executive Vice President of Social Impact, Growth, and Legislative Affairs Kim Davis also said during a press conference discussing the report, “It says that we are where we expected to be, but now we have the facts to back it up. I think the one area that we are feeling positive about is that 38% of our workforce are women. We’ve done a lot of work to improve in that area, and it’s very consistent with our current female fan base of 40%. And so that’s a great benchmark. Having said that we know we have work to do with women of color and we are leaning in to that. ”

Whitlock reacted to this report and the NHL’s comments on it during his daily show, Fearless with Jason Whitlock, saying, “The NHL, which I think you can say this, it’s a white sport. No one is sitting here shocked that most of its employees are white. The NHL is a sport dominated by men. No one is sitting here surprised that white men dominate that sport on and off the ice.”

“This is the whole movement to unseat male leadership. And so the NHL has created a problem. For the first time, this is according to the NHL, has done an internal demographic study. They didn’t do a study to see, hey, let’s do a study and see if our employees are effective. They just did a check on the race of the employees as if Jason Whitlock and all of his friends was sitting — you know I had a dream I wanted to work for the New York Islanders, no, I didn’t. And I’m sure it’s not a bad job, but it’s not a sport that I paid much attention to and neither did most… They’re winning. The other side is winning,” he declared.

“Because I want to tell men, but particularly black men, the game that’s being run on you. The NHL that has never had a female hockey player, has never had a female hockey playing in the National Hockey League, they hired a black woman to fix their workforce problem that they created. They didn’t hire a black man. ‘Hey, you know what we’re a male dominated sport. Men have traditionally been fans of this sport and participated in this sport. You know what, let’s bring a black man in here to fix this.’ No, they brought a black woman in there,” he said.

“And you heard from her her, what’s coming out her mouth, ‘We need to fix the diversity issue as it relates to women.’ So her plan is to install a bunch of black women in National Hockey League jobs,” Whitlock said. “She ain’t putting you in a job. She doesn’t care about you other than the fact to keep her foot on your neck and to keep you in a subservient role to her.”

He continued, “I don’t care if I sound like a sexist pig and misogynist. All I care about is God put you, me, T.J. Moe, a bunch of other guys that come on this show on this planet to serve in leadership roles. And you, many of you, are allowing race to distract from you from being unseated from your leadership position. Don’t be an idiot. That woman ain’t thinking about you.”

“And that black woman’s going to hand out a handful of jobs to some black women who will know nothing about the NHL,” he continued. “She’s mostly going to be handing jobs to white women, some of them actually know something about the NHL, but you’ll be sitting around applauding and clapping and happy. ‘Well, white man ain’t getting nothing. I’m happy makes my life better. They denied a white man, my life is better.’ You’re an idiot.”

“I guarantee the diversity they’re looking for, if they reduce themselves to hiring any black men, they will be LGBTQ,” Whitlock predicted. “Trust me. And they will call that progress, and you will sit like an idiot applauding your own demise.”

“You better snap out of this racial idolatry. Get into your Bible. Realize who and what you are and reject this nonsense. You are being destroyed. None of this has anything to do with you. Or they would have hired you or someone that looks like you to fix the problem,” he declared.

What do you make of Whitlock’s commentary regarding the NHL’s promise to diversify their workforce?

NEXT: Jason Whitlock: “In This Current Culture The Worst Thing You Can Be Is A Heterosexual Christian Male”