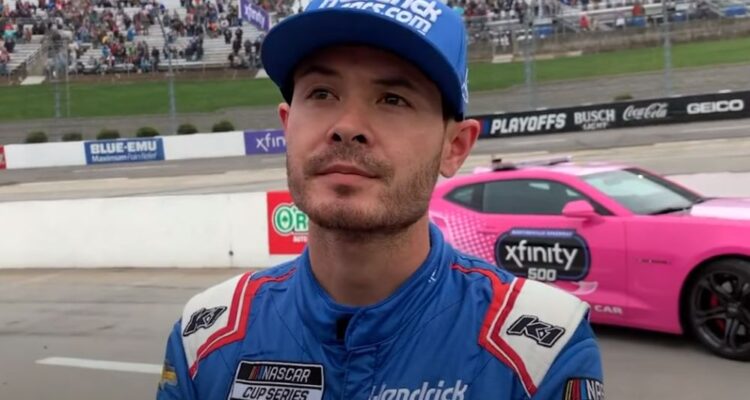 Kyle Larson took Ross Chastain to task for his last lap move at Martinsville that got him into the Champion 4 at Phoenix next week.

Chastain put his car into fifth gear, drove to the high side of the track, and rode the wall to the finish line.

On the final lap, Chastain drove past Chase Briscoe, Bubba Wallace, Joey Logano, William Byron, and Denny Hamlin. He also set the record for the fastest lap ever at Martinsville for a stock car at 18.845 seconds. The previous record was 18.954 seconds.

Here’s another look at Chastain’s move from the in-car camera:

Following the race, Chastain told NBC Sports about how he dreamed up the move, “Well, played a lot of NASCAR 2005 on the GameCube with Chad growing up. And you could get away with it. And I never if it would actually work. I mean I did that when I was eight years old.”

He went on to explain what he did, “I grabbed fifth gear, I asked off of two on the last lap if we needed it and we did. I couldn’t tell who was leading and I just made the choice. I grabbed fifth gear down the back and full committed. Once I got against the wall I basically let go of the wheel and just hoped I didn’t catch the turn 4 access gate or something crazy, but I was willing to do it.”

Larson reacted to Chastain’s move when he was asked about it by NBC Sports’ Dustin Long.

He told him, “Gosh, it’s just a bad look. I’m embarrassed that I did it at Darlington and it probably, you know, if maybe I didn’t do it last year people wouldn’t even think to do that. So I’m embarrassed myself and glad that I didn’t win that way.”

#NASCAR … Kyle Larson is not a fan of the last-lap move by Ross Chastain along the wall. Larson said it is “not a good look.” He explains … pic.twitter.com/hfYJa2qEeW

RELATED: Denny Hamlin On Bubba Wallace Wrecking Kyle Larson: “It’ll Just Take Some Time For Him To Change That Narrative”

Members of the media replied that it was part of the track and that he used every inch of the track and he was going for it. Larson was unimpressed saying, “I don’t know it’s just driver code.”

When asked if there even was a driver’s code anymore, Larson replied, “There should be.”

Larson then went on to reference Chastain’s move at the Indianapolis Road Course where he chose to take an access road going into Turn 1 instead of the actual turn.

The move had him come out in front of then leader Tyler Reddick. NASCAR penalized Chastain following the race moving him from 2nd to 27th.

RELATED: Martin Truex Jr. Reacts To Getting Spun Out By Kyle Larson On Pit Road, Ending His Chances At A Victory At Miami-Homestead Speedway

Larson stated, “That’s worse than cutting the course in my opinion. Or it should be handled as if you cut the course. I mean he gained all sorts of time.”

As Larson noted, he attempted the move at the Southern 500 at Darlington in 2021, but it ultimately did not work as Denny Hamlin was able to hold him off.

Larson’s comments regarding Chastain’s move sounds like sour grapes given he was unable to pull the move off at Darlington while Chastain was able to use the move to advance to the Championship 4 albeit he didn’t win the race. He ended up finishing in fourth. Larson finished second.

Christopher Bell won the race and the win solidified him into the Championship 4 alongside Chastain, Joey Logano, and Chase Elliott. The four drivers will compete for the championship at Phoenix.

What do you make of Larson’s comments?

NEXT: Bubba Wallace Says He Accepts Suspension, But Wants To “Keep It Consistent Moving Forward Because It’s Happened Multiple Times This Year”