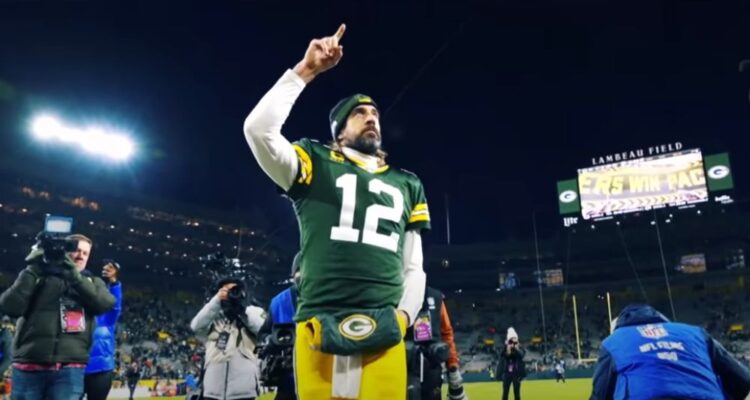 The MVP voter who refused to vote for Aaron Rodgers because of the QB’s decision to not get the Covid vaccine has been dropped by the Associated Press.

Hub Arkush, a publisher for Pro Football Weekly, called Rodgers a “jerk” for refusing to take the Covid shot. “I don’t think you can be the biggest jerk in the league and punish your team, and your organization and your fan base the way he did and be the Most Valuable Player,” Arkush told a local news outlet in January.

“Has he been the most valuable on the field? Yeah, you could make that argument. But I don’t think he is clearly that much more valuable than Jonathan Taylor or Cooper Kupp or maybe even Tom Brady,” Arkush added.

Rodgers did inevitably win the 2021 NFL MVP despite the backlash he received for refusing the vaccine. The Packer’s QB won the award for the fourth time, garnering 39 out of 50 votes.

Rodgers has remained steadfast in his decision to remain unvaccinated and to this point, he appears to have been vindicated. Last week a Pfizer executive revealed that the company had not even tested the vaccine’s ability to prevent transmission of the virus before releasing it to the public.

“Was the Pfizer Covid vaccine tested on stopping the transmission of the virus before it entered the market? If not, please say it clearly. If yes, are you willing to share the data with this committee? And I really want a straight answer, yes or no, and I’m looking forward to it,” Dutch MEP Rob Roos asked.

“Regarding the question… did we know about stopping the immunization before it entered the market? No….” Pfizer Senior executive Janine Small responded.

So if the vaccine wasn’t even tested for immunization how could one be a jerk for not taking it? This would seem to suggest that there was no science backing up the claims made by people like Joe Biden and Anthony Fauci at the time.

“You’re not going to get COVID if you have these vaccinations,” Biden said on July 21, 2021. Biden, who is vaccinated, tested positive for Covid exactly a year after that statement.

“When you get vaccinated, you not only protect your own health and that of the family but also you contribute to the community health by preventing the spread of the virus throughout the community,” Fauci said in may 2021.

“In other words, you become a dead end to the virus. And when there are a lot of dead ends around, the virus is not going to go anywhere. And that’s when you get a point that you have a markedly diminished rate of infection in the community.” How could a man who believes himself to be the human embodiment of science itself say something with no data to back it up?

Hub Arkush is another in a long line of people who were duped into following “the science.” Unlike Fauci and Biden who faced no consequences for being wrong, Arkush has been stripped of his ability to continue to vote on the NFL MVP.

Although it seems he was aware that he was in jeopardy of that fate. “But one of the ways we get to keep being voters is we’re not allowed to say who we are voting for until after the award has been announced. I’m probably pushing the envelope by saying who I’m not voting for,” Arkush said.

Arkush was right about losing his vote, but like many other people following “the science” he was wrong about everything else.