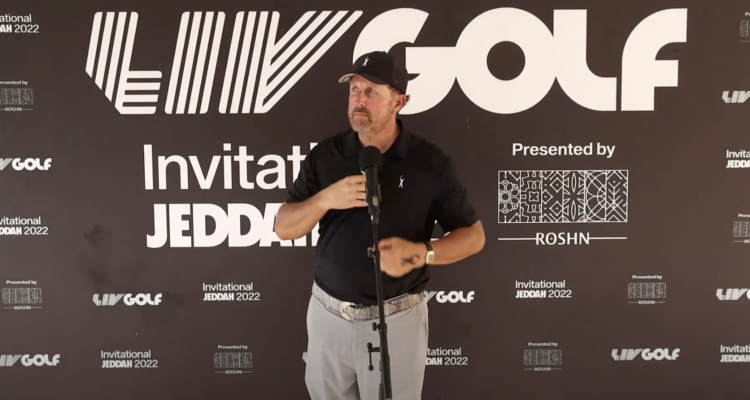 Golf star Phil Mickelson put in an awkward position this week regarding some “off-the-record” remarks he made regarding the Saudi Arabian government and the LIV Golf Tour earlier in the year.

During a press event in Jeddah, Saudi Arabia on Thursday, Mickelson was pressed by a journalist in the crowd regarding “some comments about about this country, for which you’ve apologized for” and whether or not his current opinion of the Kingdom has changed.

For context, the comments the journalist was referring too were remarks attributed to Mickelson by his biographer, Alan Shipnuck, earlier this year.

“They’re scary motherf-ckers to get involved with,” Shipnuck said Mickelson had told him. “We know they killed [Washington Post reporter and U.S. resident Jamal] Khashoggi and have a horrible record on human rights. They execute people over there for being gay. Knowing all of this, why would I even consider it? Because this is a once-in-a-lifetime opportunity to reshape how the PGA Tour operates.” It didn’t stop there according to Shipnuck’s account of Mickelson’s comments.

Interesting moment from Phil's LIV presser in Saudi Arabia. Asked about his previous comments about Saudi, he answers:

"So I will reiterate, I never did an interview with Alan Shipnuck." pic.twitter.com/fLIrlkyJe5

RELATED: Charles Barkley Comes Out In Full Force Against Critics Of Saudi-Backed LIV Golf, Compares Civil Rights In The US To Saudi Arabia

“They’ve been able to get by with manipulative, coercive, strong-arm tactics because we, the players, had no recourse. As nice a guy as [PGA Tour commissioner Jay Monahan] comes across as, unless you have leverage, he won’t do what’s right. And the Saudi money has finally given us leverage. I’m not sure I even want [the SGL] to succeed, but just the idea of it is allowing us to get things done with the [PGA] Tour.”

Mickelson responded to the reporter, stating “I will reiterate, I never did an interview with Alan Shipnuck, and I find my experience with everybody associated with LIV Golf has been nothing but incredibly positive, and I have nothing but the utmost respect for everybody that I’ve been involved with.”

Mickelson had already issued an apology when the initial controversy broke out in February, saying then “There is the problem of off the record comments being shared out of context and without my consent, but the bigger issue is that I used words I sincerely regret that do not reflect my true feelings or intentions.”

The thing to point out is that Mickelson doesn’t completely deny that the remarks were made in the first place, particularly with how he characterized the conversation with Shipnuck as being “off the record” instead of being a formal “interview.”

Shipnuck responded to Mickelson’s statement, stating that Mickelson made a “half-hearted attempt at revisionist history, trying to say our talk had been a private conversation, but I shut that down real quick.”

Either way, regardless of Michelson’s true feelings, he ultimately signed with the LIV Golf series for a whopping $200 million.