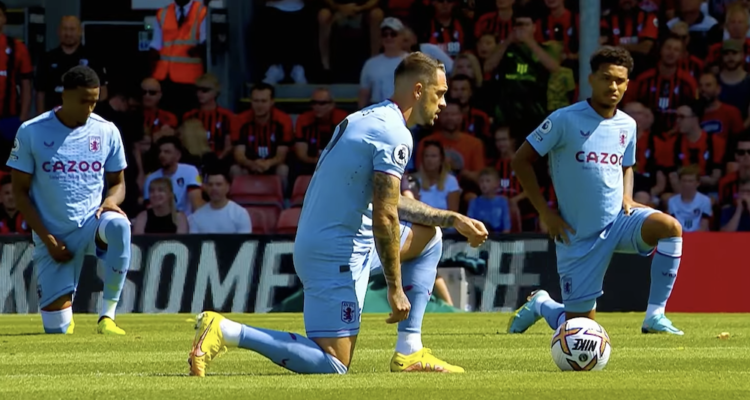 Kicking off ‘Black History Month’ in the United Kingdom, the Premier League has brought back kneeling before football matches in an attempt to keep pushing a manufactured racism narrative — introducing the “No Room For Racism” initiative.

Widely panned when initially introduced, taking the knee before football matches in Britain drew inspiration from Colin Kaepernick’s stunt in August of 2016 — when the former NFL quarterback kneeled during the United States’ anthem before a match — and further popularised by the questionable Black Lives Matter organisation following the death of George Floyd in 2020.

Described as an initiative to “fight against discrimination,” the Premier League’s official site stipulates that the woke gesture is to be performed before every football match between the 8th and 16th of October; describing the virtue signal gesture of taking the knee as “a symbol of pride” that seeks to “recognising reality and demanding change.”

More specifically, the “No Room For Racism” initiative encourages players to kneel ahead of every kick-off before a total of 20 fixtures, making the nonsensical claim that this sign of virtue shows the unity of players “against all forms of racism.”

Further, players will also be encouraged to take the knee at Boxing Day fixtures following the FIFA World Cup Qatar, “at further No Room For Racism matchdays, at Premier League matches on the final day of the season and at the FA Cup and EFL Cup Finals.”

Alongside the initiative’s announcement, Premier League Chief Executive Richard Masters issued a statement,  asserting, “Fighting racism and all forms of discrimination is always a priority for the Premier League and our clubs. We urge everybody to play their part and demonstrate that racial prejudice is not acceptable in football or wider society.”

“We support the decision made by players to take the knee at specific moments during the season and we will use these matches to further promote anti-discrimination and educate fans,” he declared.

He further explained, “We continue to work hard to address discrimination and improve opportunities within the game, in line with our No Room For Racism Action Plan.”

“We know more can be done to remove barriers to make football more inclusive, and that football will benefit from greater diversity across all areas of the sport,” Masters concluded.

Including an overly dramatic video that sees players of various football clubs taking the knee on the field, the Premier League claimed, “Racism is bigger than football. And it hasn’t gone away.”

“Taking the knee is about recognising reality and demanding change. It’s a symbol of pride. So if you’re a supporter. Support this,” the football league encouraged.

Racism is bigger than football. And it hasn’t gone away.
Taking the knee is about recognising reality and demanding change.
It’s a symbol of pride.
So if you’re a supporter. Support this.#NoRoomForRacism

Football fans wasted no time taking to social media to express their disappointment in this new initiative, which has managed to create division amongst those who have refused to take the knee before the kick-off.

“I am [100] against racism in any form – and [100] against the virtue signaling of taking a knee. Play football,” said @sometweetindude, adding, “Every player and fan then live out lives that care for all people, regardless or race.”

The user concluded, “That is how you show your heart…not some silly ritual.”

“Taking a knee stands for [Black Lives Matter], a lot of poeple think that is wrong,” decried @mattokke. “Taking a knee just winds people up and makes them more racist amd i have witmessed this.”

“Taking the knee has had an adverse effect and created division,” noted @JIronopolis. “A lack of consistency about its purpose is a joke. [England Football Team Manager Gareth Southgate] – it’s about non-equality globally; [Premier League] – it’s racism specifically.”

The user then rhetorically inquired, “Does it include anti white racism? Is banning white students from Uni meetings racist?”

“For clarification kneeling proves nothing and sloves nothing,” decried another user, proposing, “How about enacting change in your life and stop virtue signalling because you think it makes you a good person.”

Twitter user @FPL_Johnny asserted, “When people are forced to take the knee it means absolutely nothing. Regardless of what it stands for.”

“I’m not a racist and I would never take the knee, it’s subservient, not a symbol of pride,” simply said @brianboyle73.

“Totally useless, politically motivated,” decried another user. “As a fan, just give me some old school football without taking the knee for 10+ games.”

The user added, “For God sake did anyone reach out to the victim who was offended by George Floyd and many other offenders? Total useless. My POV though.”

“Why just take a knee to end racism?” pondered another user before ironically suggesting other ways to signal one’s virtues.

“How about take a bow to end greed/selfishness? Perform a curtsey to end wrath/violence? Any other inherently human moral flaws we can defeat by simple performative gestures?”

What do you make of the Premier League’s decision to bring back taking the knee before football matches in an attempt to “fight against discrimination”? Let us know your thoughts in the comments section down below or on social media.