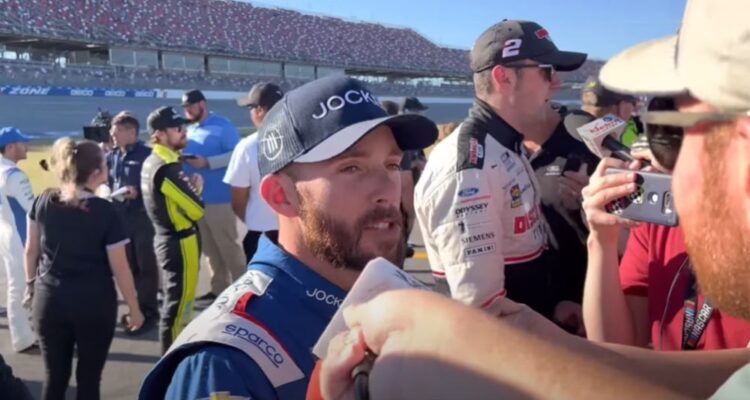 Ross Chastain Says Denny Hamlin Isn’t The Mouthpiece For The Garage After Hamlin’s Criticism Of NASCAR, Call For New Leadership

Ross Chastain, driver of the No. 1 Trackhouse Chevrolet Camaro, recently reacted to Denny Hamlin’s criticism of NASCAR and his call for new leadership by sayin he isn’t the mouthpiece of the garage.

During a press conference ahead of the Yellawood 500 at Talladega Superspeedway Hamlin’s criticism of NASCAR and the Next Gen car came to a head when he called for a full redesign of the vehicle and new NASCAR leadership.

“We’ve got a tough Martinsville race coming up. It’s gonna be tough and this thing’s just gonna get exposed about how bad it races and that’s just a part of it. The competition and safety, we’d like to have it all better, but certainly we just took a step back in safety and competition this year,” he added.

Hamlin went on to detail that he’d brought up his concerns to NASCAR last winter, “We actually as the drivers didn’t do that docu-series last year because we didn’t feel comfortable with this Next Gen car and the safety — the lack of safety testing that had been done — before they started announcing that they were going to run it.

“We threw up red flags over a year ago and they just didn’t respond. They just kept pushing this car has to be on the racetrack at all costs. At all costs,” he explained.

When asked about why team’s and other drivers aren’t speaking out, Hamlin responded, “We have to ask ourselves why we have the Next Gen car and it’s to save the team’s money, to cut costs. The sanctioned body has wanted to cut costs for the teams because it refuses to pay them. They’re trying to cut our costs so they don’t have to pay. This is why we are in the box that we are in. All this is resolving around cutting costs and so that’s why we’re running this Next Gen car and that’s essentially why we’re in this box.”

“Nobody has reached out to either one of us,” he added.

Hamlin would then be asked how to prevent something like the accidents in the 90s from happening. His response was simply, “New leadership.” He also indicated that the reason why the car is still having so many problems despite being delayed a year due to the Covid-19 pandemic was the result of “bad leadership.”

When asked to provide specifics on the bad leadership, he answered, “Just start at the top and work your way down.”

Later in the press conference, Hamlin did indicate that a lot of drivers were “b****ing and moaning” to him and Harvick, but he encouraged them to speak up saying, “they need to have their voice heard as well.”

He continued, “They’re going to be in the sport for a long time and when me and Kevin are gone someone has to step up and be the voice of reason and call things as they are. I know a lot of these young guys are happy to be here, but they ain’t going to be happy to be here when their brains are scrambled for the rest of their lives.”

Chastain specifically referenced Hamlin’s final comments saying, “I want to say they don’t speak for all of us on everything they say. I know that Denny says, ‘Look, these guys are just being quiet because they are happy to be here,’ but we have our own thoughts too. I know I do. And everything he says isn’t just the mouthpiece for the entire garage.

He added, “Sometimes saying less is more though and there’s a better way to do it than just doing that. A lot of talking and a lot of really, a lot of pinpointed efforts to move the safety front forward and we’ll see that coming soon. Safety never stops, man. Like we always can make these things safer. We can make this guardrail safer. We can make these racing shoes and your sneakers safer. The chase for that never stops.”

What do you make of Chastain’s reaction to Hamlin’s comments? What about Hamlin’s call for a new redesign and new leadership?

NEXT: NASCAR Responds To Criticism Of “Crappy Parts” After Multiple Failures At Bristol Motor Speedway