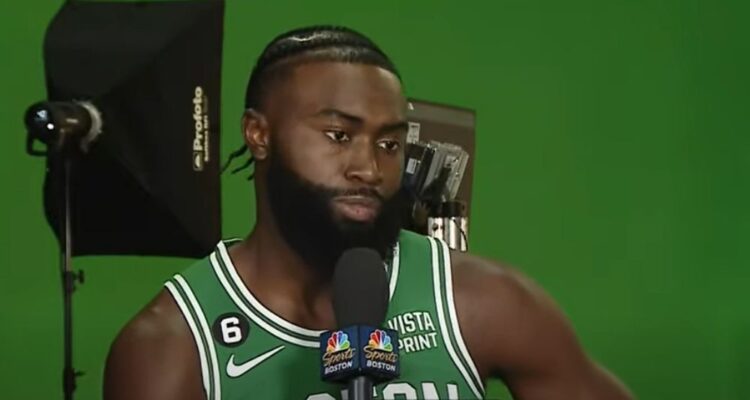 Boston Celtics forward Jaylen Brown, who is also the Vice President of the National Basketball Player’s Association, shared his thoughts on the Brooklyn Nets’ indefinite suspension of Kyrie Irving and their demands for him to return to the court.

Irving was suspended by the Nets after he posted a movie link to Twitter. He tweeted the Amazon link to the film Hebrews to Negroes: Wake Up Black America The Movie.

The Nets announced the suspension on Twitter, “Over the last several days, we have made repeated attempts to work with Kyrie Irving to help him understand the harm and danger of his words and actions, which began with him publicizing a film containing deeply disturbing antisemitic hate. We believed that taking the path of education in this challenging situation would be the right one and thought that we had made progress with our joint commitment to eradicating hate and intolerance.”

Despite the Nets’ claims, Irving made it very clear he denounced hate.

Originally addressing media personalities attacking him as anti-Semitic, Irving said, “In terms of the backlash or what people call it, we’re in 2022, history is not supposed to be hidden from anybody. And I’m not a divisive person when it comes to religion. I embrace all walks of life. You see it on all my platforms. I talk to all races, all cultures, all religions.”

“My response would be, it’s not about educating yourself on what Semitism is and what anti-Semitism is, it’s really about learning the root words of where these come from and understanding that this is an African heritage belonging to the people,” Irving stated. “Africa is in it whether we want to dismiss it or not. So the claims of anti-Semitism and who are the original Chosen people of God and we go into these religious conversations and it’s a big No-no. I don’t live my life that way,” he added.

Irving continued, “I grew up in a melting pot and I say a melting pot of all races: white, black, red yellow, Jewish, Christian, Muslim. And you can see the way I live my life now. I’m not here to be divisive so they can push their agenda — I don’t want to say they because I’m not identifying anyone one group or race of people, but I’m in a unique position to have a level of influence on my community.”

He also asserted, “I’m not going to stand down on anything I believe in. I’m only going to get stronger because I’m not alone. I have a whole army around me. We’re in 2022. History is not supposed to be hidden from anybody, and I’m not a divisive person when it comes to religion.”

Then in a joint statement with the NBA and the Anti-Defamation League, Irving stated, “I oppose all forms of hatred and oppression and stand strong with communities that are marginalized and impacted every day. I am aware of the negative impact of my post towards the Jewish community and I take responsibility.”

He added, “I do not believe everything said in the documentary was true or reflects my morals and principles. I am a human being learning from all walks of life and I intend to do so with an open mind and a willingness to listen. So from my family and I, we meant no harm to any one group, race or religion of people, and wish to only be a beacon of truth and light.”

He even pledged to “donate $500,000 toward causes and organizations that work to eradicate hate and intolerance in our communities.”

In a press scrum, he was asked, “Do you have any anti-Semitic beliefs?” He responded, “Again, I’m going to repeat. I don’t know how the label becomes justified because you ask me the same questions over and over again, but this is not going to turn into a spin around cycle of questions upon questions. I told you guys how I felt. I respect all walks of life and embrace all walks of life. That’s where I sit.”

He also issued an apology following the suspension on Instagram, “While doing research on YHWH, I posted a Documentary that contained some false anti-Semitic statements, narratives, and language that were untrue and offensive to the Jewish Race/Religion, and I take full accountability and responsibly for my actions. I am grateful to have a big platform to share knowledge and I want to move forward by having an open dialogue to learn more and grow from this.”

RELATED: Brooklyn Nets Reportedly Have 6 Demands Including Sensitivity Training That Kyrie Irving Must Meet In Order To Be Reinstated

Nevertheless, he was still suspended and it was reported by The Athletic’s Shams Charania that the Nets had six demands for Irving to return.

Jaylen Brown spoke to the Boston Globe about the Nets’ suspension of Irving and their list of demands for him to return to the court.

He stated, “I don’t believe Kyrie Irving is antisemitic. I don’t think people in our governing bodies think he’s antisemitic. He made a mistake. We understand from an outside perspective how important sensitivity is to not condone hate speech and not condone anything of that nature. It’s sensitivity to the dialect around that. We don’t want to stand up for somebody in order to not condemn hate speech, but I don’t believe Kyrie Irving is antisemitic. And hopefully the NBA feels the same way.”

Brown went on to point out that Irving did not break any rules and that Irving’s meeting with NBA Commissioner Adam Silver will give them guidance on dealing with social media in the future.

“There is an interesting distinction between what somebody says verbally and what somebody posts as a link on a platform with no description behind it,” he said. “Some people will argue there’s no difference and some people will argue there is a difference. There’s no language in our CBA. There’s no rules against it. This is uncharted territory for everybody, and everybody is trying to figure out the difference between the two.”

He continued, “It’s definitely a conversation that’s going on. I told people that are participating in this ongoing discussion that everybody is watching. I think there’s a big meeting on Tuesday amongst Adam, Kyrie, and whomever they decided to be there.

He eventually revealed the NBPA will appeal the suspension and that a number of players did not like the demands Brooklyn made.

He relayed, “But I’m expecting the NBPA to appeal the suspension from Brooklyn. The terms, etc., that went into his return. The terms for his return, they seem like a lot, and a lot of the players expressed discomfort with the terms.

Brown further added, “He made a mistake. He posted something. There was no distinction. Maybe we can move forward, but the terms in which he has to fulfill to return, I think not just speaking for me, speaking as a vice president from a lot of our players, we didn’t agree with the terms that was required for him to come back and we’re waiting for this Tuesday meeting to happen to see what comes of it. But we’ll go from there. That’s all I’ll say.”

In response to Brown’s comments, host of Fearless with Jason Whitlock tweeted, “NBA players should be asking why their union is silent on the abusive treatment of Kyrie Irving. Weakest union in the history of sports. The Yaas Queens are in charge.”

The Players Association has been relatively silent. They did issue a statement condemning anti-Semitism without mentioning Irving at all.

The statement reads, “Anti-Semitism has no place in our society. The NBPA is focused on creating an environment where everyone is accepted. We are committed to helping players fully understand that certain words can lead to hateful ideologies being spread. We will continue to work on identifying and combating all hate speech wherever it arises.”

What do you make of Brown’s comments? What do you think about the NBPA’s relative inaction as the Brooklyn Nets have railroaded him for sharing a movie link to Twitter?