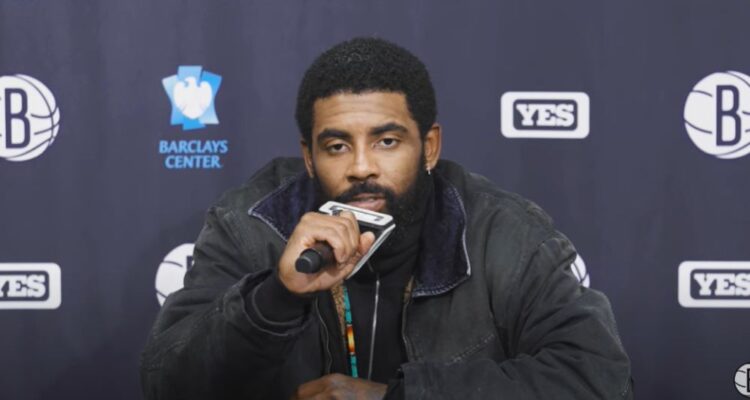 A new report claims the Brooklyn Nets have at least six demands Kyrie Irving must meet in order for him to be reinstated for the team after they suspended him for sharing a movie link to his Twitter account.

Irving was indefinitely suspended after he shared an Amazon link to the film Hebrews to Negroes: Wake Up Black America The Movie to his Twitter account.

The Nets announced the indefinite suspension writing, “Over the last several days, we have made repeated attempts to work with Kyrie Irving to help him understand the harm and danger of his words and actions, which began with him publicizing a film containing deeply disturbing antisemitic hate. We believed that taking the path of education in this challenging situation would be the right one and thought that we had made progress with our joint commitment to eradicating hate and intolerance.”

Following the suspension announcement, Irving apologized for sharing the movie link. He wrote on Instagram, “While doing research on YHWH, I posted a Documentary that contained some false anti-Semitic statements, narratives, and language that were untrue and offensive to the Jewish Race/Religion, and I take full accountability and responsibly for my actions. I am grateful to have a big platform to share knowledge and I want to move forward by having an open dialogue to learn more and grow from this.”

Now a new report from The Athletic’s Shams Charania claims the Nets have six demands Irving must meet in order to return to the team.

The ADL rejected Irving’s donation with the organization’s CEO Jonathan Greenblatt responding to Irving’s apology writing, “This is an encouraging step from Kyrie Irving. But actions speak louder than words. Because of his post and previous refusals to walk it back, the anti-Semitic film/book is now a best seller in multiple categories on Amazon. There is a lot more to do to undo this damage.”

He wrote in a second tweet, “Although we will not accept any funds from him, if Kyrie is open to direct dialogue to repair the harm that he has caused and to engage in a process of healing and learning in a sincere manner, Anti-Defamation League is open to engaging with him. Time and action will tell.”

YouTuber Ryan Kinel of Sports Wars reacted to this list of demands and the actions the Brooklyn Nets and the NBA have taken against Irving.

He began, “Just like we saw last year when Kyrie refused to take the jab, the NBA and the mainstream media are trying to make an example out of him, trying to use him as a warning to say, ‘Don’t step out of line. Never say anything against the approved narrative, or we will destroy you.’ That’s what they are trying to do with Kyrie Irving right now.”

RELATED: Brooklyn Nets’ Kyrie Irving: “Enforced Vaccine/Pandemic Is One Of The Biggest Violations Of Human Rights In History”

Later in the video, Kinel asserts, “You could listen to what he said and he did say that, not unequivocally, but he did say, ‘I’m not anti-Semitic.’ He said it multiple times. Maybe not in the way that they wanted him to say it, but that’s what he said.”

“And it’s so ironic that time after time we see that there is a double standard in the NBA and in woke sports,” Kinel declares. “You can s**t on white people all you want. You can trash white people all you want. You can promote any kind of ‘Oh look at what white people are trying to do to us. Look, we’re on the plantation.’ You can promote all that kind of s**t that you want in professional sports and they have been doing that for years now and that’s fine. But as soon as you say the wrong thing well then all of a sudden you’re cancelled completely.”

Reacting to Irving’s apology, Kinel said, “Good job apologizing, Kyrie. What did that do? Nothing. It did absolutely nothing for him. Because once they decide that they want to make an example of you that’s what’s going to happen.”

“And you are only approved to hate one group of people or say anything derogatory towards one group of people and that is white people,” Kinel opined. “That’s blatantly clear, crystal clear in the NBA. And they’re making it very apparent with what they’re doing right now to Kyrie Irving.”

To that point, The Daily Wire’s Matt Walsh recalled that LeBron James specifically targeted a police officer after he stopped an attempted murder.

Back in April 2021 after a video went viral of the officer saving a young girl who was being attacked by another girl with a knife, James tweeted a picture of the officer and wrote, “YOU’RE NEXT #ACCOUNTABILITY”

Walsh recalled the tweet writing, “Remember when Lebron James tweeted a photo of a police officer with the words “you’re next” after the officer shot a knife-wielding maniac who was in the process of trying to murder a young woman? He was never suspended, never condemned by the NBA, never any accountability at all.”

RELATED: Kyrie Irving Shares Alex Jones Video Calling Out Totalitarian Governments Coming To Power “By Releasing Diseases And Viruses And Plagues Upon Us”

He continued, “That’s why I can’t take the backlash against Kyrie Irving seriously. It’s not like we hold athletes to a high standard when it comes to their public rhetoric. The standard rises or falls dramatically depending on who it is and depending on the politics involved.”

“This is to say nothing of Lebron’s tweets about the Jacob Blake shooting. He was leveraging his massive platform to personally destroy the lives of innocent police officers and encourage rioting in the process. It’s hard to imagine speech more harmful than that,” he concluded.

James tweeted at the time regarding Jacob Blake, “And y’all wonder why we say what we say about the Police!! Someone please tell me WTF is this???!!! Exactly another black man being targeted. This s**t is so wrong and so sad!! Feel so sorry for him, his family and OUR PEOPLE!! We want JUSTICE”

What do you make of the Brooklyn Nets’ persecution of Kyrie Irving for sharing a link to a movie to his Twitter?

NEXT: Cole Beasley Rips The Brooklyn Nets After They Suspend Kyrie Irving, Questions If Amazon Will Get Cancelled Too