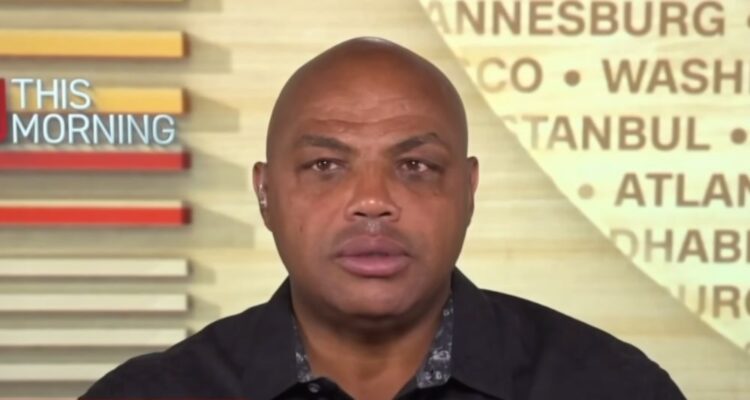 Charles Barkley Insinuates That Kyrie Irving And Kanye West Are Racists, Calls For Kyrie Irving To Return To The Court, And Claims Free Speech Has Consequences

NBA on TNT analyst and former NBA Most Valuable Player Charles Barkley is now calling for the Brooklyn Nets to allow Kyrie Irving to return to the basketball court after being suspended indefinitely at the beginning of the month. However, he also insinuates that he’s a racist alongside Kanye West.

Irving was suspended by the Nets after he posted an Amazon link to the documentary film Hebrews to Negroes: Wake Up Black America The Movie to his Twitter account.

RELATED: Three Former NBA Referees File Lawsuit Against NBA, Say They Were Fired For Refusing COVID Vaccine And Claim The Choice Was “Jab Or Job”

Following this post, Barkley called for Irving to be suspended. “I think the NBA dropped the ball. I think he should have been suspended. I think Adam [Silver] should have suspended him.” Barkley said.

🎥 “I think he should’ve been suspended.” Charles Barkley and Shaq share their thoughts on the Kyrie Irving situation and the departure of Steve Nash pic.twitter.com/3riZvXz3cm

The Nets would indefinitely suspend Irving for at least a minimum of five games on November 3rd, deeming his post somehow anti-Semitic.

They posted to Twitter, “Over the last several days, we have made repeated attempts to work with Kyrie Irving to help him understand the harm and danger of his words and actions, which began with him publicizing a film containing deeply disturbing antisemitic hate. We believed that taking the path of education in this challenging situation would be the right one and thought that we had made progress with our joint commitment to eradicating hate and intolerance.”

The Nets have played seven games with Irving suspended and have gone 4-3 and Barkley is now calling for Irving to be able to return to the basketball court.

Speaking to Don Lemon of CNN, Barkley was asked, “How do you think the league should deal with [Irving’s suspension]? … What if these are his real beliefs? Should they be dealing with that as well? Maybe they have someone that actually believe these things. I’m not saying it is right instead of forcing him to apologize. Maybe they should be dealing with that part of it?”

Barkley replied, “People have the right to feel and say what they want to. We have freedom of speech, but there are repercussions when you say certain things.”

“Listen, I don’t know Kyrie Irving. I don’t know if he’s a good guy or a bad guy. I think he’s been suspended rightfully so, and I think he should come back and play in the NBA,” Barkley continued.

Barkley then declared, “But this thing with free speech has really gotten out of hand, Don. You can’t just go around insulting people and think it’s okay just because it’s freedom of speech.”

When Lemon posited that cancel culture is defined as someone not getting to say what they want to say, Barkley replied, “I don’t like to use the term cancel culture because I don’t want anyone cancelled, but you should be called to the carpet if you said something wrong. No, I don’t believe somebody should lose their job or things like that, but you should be called out if you said something stupid.”

“Hey, I’ve been called out many times and I have no problem with that,” he said. “But I hate the term cancel culture because very few people are cancelled, let’s be honest and realistic.”

Later in the segment, Barkley insinuated that both Irving and Kanye West are racists. He said, “Well, you know Don, first of all, one thing that has always disturbed me as a black person, which really bothers me about the Kyrie Irving situation and the Kanye West situation. First of all, being black in America is already hard enough and for us to go at other ethnic groups just makes things worst because it’s hard enough being black.”

He then went on a tangent about gay and people claiming to be transgender being mistreated by black people, “And one thing that’s always disappointed me, black people treat gay people. We are the worst when it comes to treating gay people. That’s one thing growing up that really always bothered me.”

“And I wanted to reach out to you, and all my gay friends, all my transgender friends, and tell you I’ve got nothing but love and respect for you,” he concluded. “I want you to be you. And I wanted you to know that day because I understand being black what it’s like being gay because you get mistreated and it’s really unfortunate and sad and stupid to be honest with you.”

What do you make of Barkley’s comments?