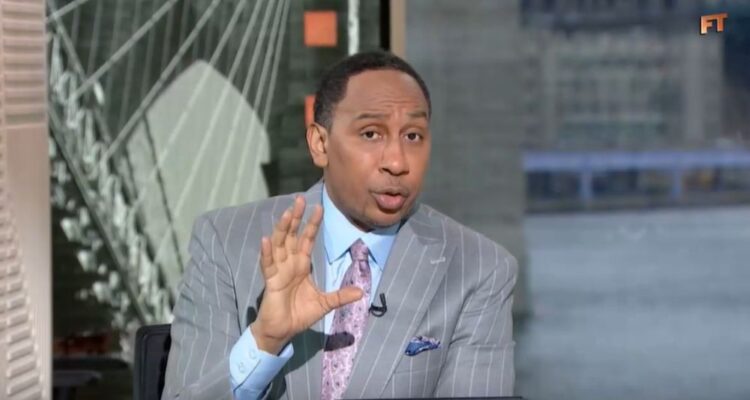 Stephen A. Smith via Streamable

ESPN Host Stephen A. Smith issued an on-air apology for using the term “homosexual” during a segment discussing a now-deleted Lamar Jackson tweet.

Jackson took offense at Twitter user CastleWillKill sharing his opinion that the Baltimore Ravens should let him walk rather than pay him $250 million.

CastleWillKill tweeted, “When someone is asking for over 250 mil guaranteed like Lamar Jackson … games like this should not come to Justin Tucker. Let Lamar walk and spend that money on a well rounded team.”

Jackson replied, “Boy STFU y’all be cappin too much on this app mf never smelt a football field never did shit but eat dick!!”

Discussing the tweet during a segment of First Take, Smith stated, “I want to start off this with some little discomfort by saying that I just read for the first time, just read the text or the tweet that Lamar Jackson said. I am not a homosexual so I am not going to define what’s offensive to them or not, I’ll let them do that.”

“It looked to me like he was cussing a dude out. Very, very frustrated. He went the hell off,” Smith shared his observation. “There’s a lot of people that get cussed out and when you’re cussing folks out you say some things sometimes. That’s how I read that: cussing somebody out. As opposed to going where folks might go with that.”

Smith then reiterated, “But again, I’m not a homosexual so the homosexual community, the gay community gets to define that better than me. Let me say that. That’s number one.”

As reported by Awful Announcing, Smith would later apologize for using the term “homosexual” while discussing Jackson’s tweet.

He said, “I just wanted to address, at the start of the show when we were talking about Lamar Jackson, I should have uttered the word gay.”

“The LGBTQ community prefers that over other words because obviously other words are believed to be derogatory in their eyes. So as a result of that, my apologies. I should have used the word gay,” he apologized.

There is absolutely no reason to apologize for using the term homosexual over gay. In fact, Smith should have used the word Sodomite instead.

Catholic commentator and author Dr. Taylor Marshall recently explained how language policing — as seen by Stephen A. Smith’s apology — “forces you to accept a worldview that you don’t agree with.”

He continued, “Now, this has happened with, I want to say almost all, but I’ll say a great majority of the words that we use for sin.”

He continued, “What was the word? Sodomy. Sodomite. ‘John is a sodomite. Now, John is gay. He’s happy.'”

Later on in the video, he further stated, “Sodomy comes from the Bible: Sodom and Gomorrah. What did they try and do in Sodom? Well, these two angels came to the home of Lot and the men of Sodom surrounded the house and demanded that Lot hand them over so that they could sodomize them, rape them. It was a homosexual passion and request. Sodomy.

“And this comes into Latin as the picatum sotomiticum. The somadidical sin. The sin of sodomy. … Instead of saying, ‘Oh that’s gay.’ Just say, ‘That’s sodomite,’ if it’s really sodomy.”

“Uh no. No, it definitely has to do with they wanted to rape some dudes who they thought were dudes, beautiful dudes. That’s what sodomy is,” he asserted.

What do you make of Stephen A. Smith’s apology?