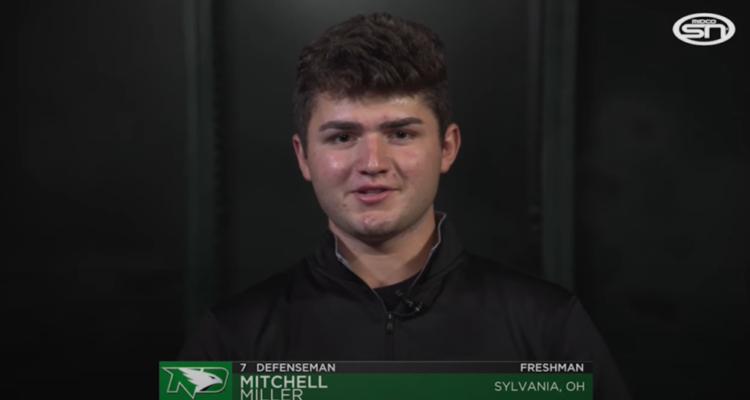 Isaiah Meyer-Crothers recently penned a letter to the Hockey Diversity Alliance accusing former Boston Bruins prospect Mitchell Meyers of not only calling him the ‘n’ word repeatedly over multiple years, but also physically assaulting him.

Meyers was recently signed to an entry level contract with the Bruins on November 4th. However, after social media pressure and an announcement that he would not be eligible to play in the NHL by Commissioner Gary Bettman, the Bruins announced two days later that they had parted ways with him.

Bruins President Cam Neely explained the decision, “Based on new information, we believe it is the best decision at this time to rescind the opportunity for Mitchell Miller to represent the Boston Bruins. We hope that he continues to work with professionals and programs to further his education and personal growth.”

The official Hockey Diversity Alliance published the letter prefacing it writing, “Incredibly heart-breaking read but a necessary one. Our actions or lack thereof, have real-life consequences.”

They added, “A statement from Isaiah Meyer-Crothers in his own words sent to Akim Aliu, HDA Chair, on November 8, 2022 which he asked the HDA to release publicly on his behalf.”

The letter begins, “I am Isaiah Meyer-Crothers. I would like to make a statement. I have been bullied since I was in 1st grade. There were not many black kids at my school. I was called ‘brownie’ and ‘n—–.’ Kids said my black mom and dad didn’t love me that’s why I had white parents.”

Specifically referring to Miller, he wrote, “Mitchell used to ask me to sit with him on the bus and then he and his friends would punch me in the head. This happened my whole time in school.  When I went to junior high Mitchell would spit in my face and call me a N word. I stopped telling because they called me snitch and I would get made fun of. I had to say I was ‘his n—–‘ to sit at his table and he made me clean the whole table. He threw food in my face. I was called ‘n—–‘ every day.”

Meyer-Crothers continued his accusations against Miller, “The office would tell me to stay away from him because he wasn’t my friend. Once he got expelled from school, his friends started bullying me. He pretended to be my friend and made me do things I didn’t want to do. In junior high, I got beat up by him. Everyone thought he was cool, but I don’t see how someone can be cool when you pick on someone and bully someone your entire life.”

“Middle of October, I was being texted constantly everyday till I answered a Snapchat and IG message from Mitchell Miller. He asked me why I always have my parents doing stuff for me and why can’t I speak for myself. I told him I don’t care what my parents say I’m old enough to speak for myself. He told me he was sorry and [that the apology] didn’t involve hockey.”

“He told me was doing stuff in the community and helping the youth and wanted to be my friend. I told him, ‘That’s all cool but where is the proof though?’ He didn’t give me any [proof].’ All the lies I have been told from him for so many years I don’t believe what Mitchell told me.”

“He kept me asking me to be his friend and that he has changed over the years from what he did,” Meyer-Crothers claimed. “I told him, ‘I’m not just gonna be your friend after all you did to me.’ I am not getting messages on social media from people, calling me ‘a slow, retarded a**clown’ and ‘you stupid N—–,’ saying that ‘I need help’.

“Mitchel isn’t my friend. It hurts my heart what he did to me. So I just wanted to tell everyone—when Mitchell says we’re friends it isn’t true. I can’t take more of this,” he concluded.

Interestingly, Meyer-Crothers claims Miller didn’t provide him any evidence, yet he does the same thing by providing no evidence of his accusations.

n fact, Meyer-Crothers’ letter echoes what his mother has been saying to the press in the wake of Miller being initially offered the entry level contract by the Bruins. She told NBC10 Boston, “As far as I’m concerned, he’s a monster.”

“He told our son that his black mom and dad didn’t love him, that’s why he had white parents,” she claimed. “On a daily basis, was called the N-word. [Miller] would ask Isaiah to sit with him on the bus, and as soon as Isaiah would sit with him, him and his friends would just punch Isaiah in the head nonstop, and all he wanted was friends. So he was an easy target for Mitchell.”

Miller did admit in Lucas County Juvenile court to assault and violation of the Ohio Safe Schools Act according to The Blade. When he was 14 years old Miller detailed to the court that he and Hunter McKie discovered a push-pop, took it into the bathroom, wiped it on the top of the urinal, and then offered it to a number of their classmates including a girl named Bailey and a boy named Brady, who both declined to take it.

The two boys then offered it to Isaiah, who accepted it without being forced. After informing Isaiah of what they did, Isaiah chased them into a hallway. It’s there that Miller punched Meyer-Crothers.

Surveillance video was reportedly shown in the court showing McKie and Miller punching and kicking Isaiah.

In a statement to the court Miller said, “I’m sorry for bringing my family under stress and to my sister for going back to school and having to deal with all the bullying stuff. I didn’t mean to intentionally hurt [Isaiah].”

Magistrate Laura Restivo addressed Miller saying, “It’s our mission to rehabilitate. You are 14 years old. You have a lot of living ahead of you. I think, as your mom said, it’s been a tragic experience you’re going to learn from and move forward from. You will end up being a better person at the end of this.”

What do you make of Meyer-Crothers’ accusations against Mitchell Miller?