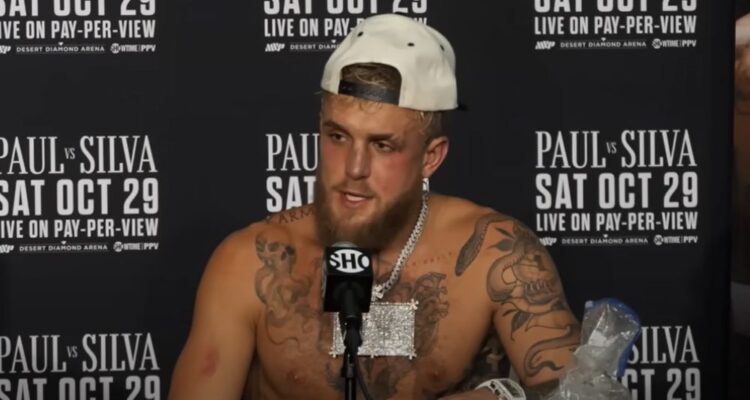 Jake Paul Goes After Nate Diaz By Calling Him A “Street Gangster,” Calls Out Dana White Too

Jake Paul had a lot to say after beating Anderson Silva by unanimous decision on Saturday.

Diaz attended the Paul-Silva event to support his teammate Chris Avila, who scored an unanimous decision victory over YouTube star Dr. Mike Varshavski on the undercard.

During the event, Diaz’s entourage got into a scuffle with Paul’s team that had to be broken up by security. Video emerged that showed Diaz slapping a member of Paul’s team.

Afterwards, Paul said that he was not there for the altercation, but learned about it after the fight.

“I haven’t seen the video, and I didn’t really know what happened,” Paul said. “I just know there was an altercation with my team. I was focused on what was going on, and I was made aware of it afterward.”

“It’s typical of him. It’s what he likes to do. He’s a street gangster,” Paul declared. “He likes to act tough, and he’s really not. Why are you trying to beat somebody up in a hallway, bro?”

Later in the press conference, Paul turned his attention to UFC president Dana White. Paul and White have a public feud that dates back to Paul’s first high profile bout with former UFC fighter Ben Askren.

Since then, Paul has repeatedly gone after White for the UFC’s business practices, specifically fighter pay. White has fired back at Paul and at one point even accused him of taking steroids.

In the post-fight press conference, Paul did not hold back. “Dana? Dana? Dana?” Paul said. “Bro, you said I wouldn’t do this, and I did it and with flying colors. He’s in hiding. He’s trying to do everything he can to stop my run, to sabotage my fights. He hates me. He hates what I’m doing. He hates that I’m exposing his business. Now we’re going to band together and create a united fighters’ association to help all MMA fighters and boxers to get more fighter pay, long term healthcare.”

“That’s a big, big undertaking that I’ve been wanting to do the whole entire time of my career since I first met [my business partner] Nakisa [Bidarian]. I said that to him on the first day. I want to make a fighters’ union. So Dana White can suck this d***.”

What do you think of Jake Paul’s comments? Do you think Nate Diaz is next for him?