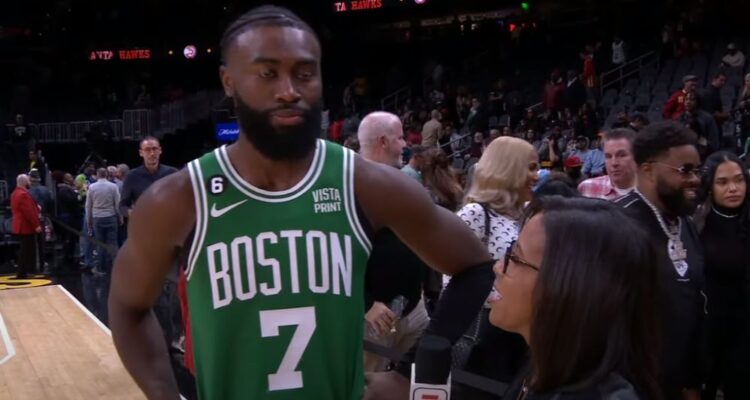 Tsai originally insinuated Irving was anti-Semitic after the star player shared a film link to Twitter. At the end of October, Irving posted to Twitter the Amazon link to the film Hebrews to Negroes: Wake Up Black America The Movie to his Twitter account.

Tsai reacted to the post writing on Twitter, “I’m disappointed that Kyrie appears to support a film based on a book full of anti-Semitic disinformation. I want to sit down and make sure he understands this is hurtful to all of us, and as a man of faith, it is wrong to promote hate based on race, ethnicity or religion.” Tsai said.

“This is bigger than basketball,” he added.

Tsai then suspended Irving indefinitely from the team claiming he failed to disavow anti-Semitism properly.

The Nets announced, “Over the last several days, we have made repeated attempts to work with Kyrie Irving to help him understand the harm and danger of his words and actions, which began with him publicizing a film containing deeply disturbing antisemitic hate. We believed that taking the path of education in this challenging situation would be the right one and thought that we had made progress with our joint commitment to eradicating hate and intolerance.”

The announcement was a complete and utter sham as Irving had repeatedly made it clear he did not embrace or promote hate of any kind before the suspension. At a post-game press conference he addressed the backlash he was receiving from numerous media personalities and outlets that were attempting to vilify him.

He stated, “In terms of the backlash or what people call it, we’re in 2022, history is not supposed to be hidden from anybody. And I’m not a divisive person when it comes to religion. I embrace all walks of life. You see it on all my platforms. I talk to all races, all cultures, all religions.”

“My response would be, it’s not about educating yourself on what Semitism is and what anti-Semitism is, it’s really about learning the root words of where these come from and understanding that this is an African heritage belonging to the people,” Irving stated. “Africa is in it whether we want to dismiss it or not. So the claims of anti-Semitism and who are the original Chosen people of God and we go into these religious conversations and it’s a big No-no. I don’t live my life that way,” he added.

Irving continued, “I grew up in a melting pot and I say a melting pot of all races: white, black, red yellow, Jewish, Christian, Muslim. And you can see the way I live my life now. I’m not here to be divisive so they can push their agenda — I don’t want to say they because I’m not identifying anyone one group or race of people, but I’m in a unique position to have a level of influence on my community.”

He also asserted, “I’m not going to stand down on anything I believe in. I’m only going to get stronger because I’m not alone. I have a whole army around me. We’re in 2022. History is not supposed to be hidden from anybody, and I’m not a divisive person when it comes to religion.”

He then issued a joint statement with the NBA and the Anti-Defamation League that read, “I oppose all forms of hatred and oppression and stand strong with communities that are marginalized and impacted every day. I am aware of the negative impact of my post towards the Jewish community and I take responsibility.”

He added, “I do not believe everything said in the documentary was true or reflects my morals and principles. I am a human being learning from all walks of life and I intend to do so with an open mind and a willingness to listen. So from my family and I, we meant no harm to any one group, race or religion of people, and wish to only be a beacon of truth and light.”

Then in a press scrum he was directly asked, “Do you have any anti-Semitic beliefs?”

Irving replied, “Again, I’m going to repeat. I don’t know how the label becomes justified because you ask me the same questions over and over again, but this is not going to turn into a spin around cycle of questions upon questions. I told you guys how I felt. I respect all walks of life and embrace all walks of life. That’s where I sit.”

It was this response that the Nets claimed prompted their suspension.

Following the suspension announcement, Irving issued an apology to Instagram. It reads, “While doing research on YHWH, I posted a Documentary that contained some false anti-Semitic statements, narratives, and language that were untrue and offensive to the Jewish Race/Religion, and I take full accountability and responsibly for my actions. I am grateful to have a big platform to share knowledge and I want to move forward by having an open dialogue to learn more and grow from this.”

RELATED: Brooklyn Nets Reportedly Have 6 Demands Including Sensitivity Training That Kyrie Irving Must Meet In Order To Be Reinstated

It was then reported that the Nets had six requirements Irving must meet in order to return to the team.

More recently, Tsai claimed he met with Kyrie and declared he does not believe he hates the Jewish people or any group.

He wrote on Twitter, “Clara and I met with Kyrie and his family yesterday. We spent quality time to understand each other and it’s clear to me that Kyrie does not have any beliefs of hate towards Jewish people or any group.”

In a follow-up tweet he wrote, “The Nets and Kyrie, together with the NBA and NBPA, are working constructively toward a process of forgiveness, healing and education.”

However, despite this claim, just a day later the New York Post’s Brian Lewis reported he spoke to Tsai and the owner informed him that Irving “still has work to do” in order to return to the Nets’ lineup.

Brown reacted to this information writing, “This response is alarming for multiple reasons.”

In a post-game press conference Brown would be asked about the tweet where he elaborated on why Tsai’s comment is alarming.

First he reiterated, “His response was alarming to me. I tweeted it out yesterday. He didn’t say that the organization was working together to get Kyrie back on the floor. He said that he had more work to do.”

Brown continued, “I’m the Vice President of the union and it’s part of my job to protect our players legally. And to see [former Nike CEO] Phil Knight, first, come out and condemn Kyrie and then also see Joe Tsai say he has more work to do, I think it’s time for a larger conversation.”

“Adam came out and said a statement that he doesn’t believe Kyrie is anti-Semitic yet he’s still suspended indefinitely. So those are my thoughts,” he concluded.

Not only is Tsai the owner of the Brooklyn Nets, but he is also the co-founder and executive vice chairman for the Chinese technology company Alibaba Group.

ESPN reported in April that “Alibaba is ‘effectively state-controlled,’ according to a recent study on the company by Garnaut Global an independent research firm that analyzes the Chinese Communist Party structure and China’s technology footprint.”

It goes on to note, “Those technologies have been used widely in the western region of Xinjiang, where the government has forced more than 1 million Uyghur Muslims and other ethnic minorities into barbed-wire ‘re-education’ camps, policies that have been described as cultural ‘genocide’ by the United States, several other countries and human rights organizations.”

It’s clear the NBA should be taking action against Joe Tsai for his and his company’s actions rather than allowing Tsai to persecute Kyrie Irving for a posting a link to a movie to Twitter.

And there is precedent to take action against Joe Tsai. The NBA just ran Phoenix Suns owner Robert Sarver out of the league following a report that claimed he quoted people using the ‘N’ word five times, engaged in equitable conduct, and “made numerous sex-related comments in the workplace.”

Following the release of the report, Sarver noted he was pressured into selling the team. In a press release he stated, “As a man of faith, I believe in atonement and the path to forgiveness. I expected that the commissioner’s one-year suspension would provide the time for me to focus, make amends and remove my personal controversy from the teams that I and so many fans love.”

“But in our current unforgiving climate, it has become painfully clear that that is no longer possible – that whatever good I have done, or could still do, is outweighed by things I have said in the past. For those reasons, I am beginning the process of seeking buyers for the Suns and Mercury,” he added.

What do you make of Brown’s comments? What do you think the NBA and the NBPA will do?

NEXT: Stephen A. Smith Reverses Course On Kyrie Irving, Now Claims He’s Got A Metaphorical Knee On His Neck After Previously Claiming He Deserved Indefinite Suspension