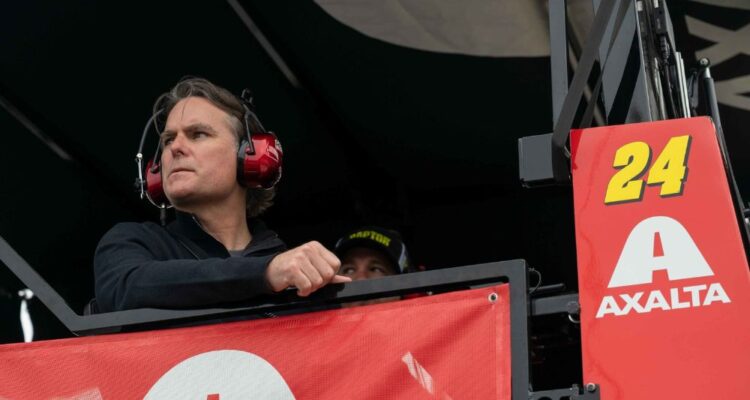 Jeff Gordon, the Vice Chairman of Hendrick Motorsports, shared his thoughts on Chase Elliott spinning off the nose of Ross Chastain during the championship race at Phoenix.

At the beginning of the Final Stage with 113 laps to go, a restart saw Elliott start in the third row ahead of Ross Chastain. As the green flag dropped numerous drivers fanned out going into the dogleg.

Chastain drove his car to the bottom of the track and as Dale Earnhardt Jr. points out, “Chastain gave him no breaks there. Chastain is underneath him right here and the 9 comes across his nose and Chastain holds his ground.”

The spin ended Elliott’s chance of claiming the championship and he finished in a disappointing 28th.

Following the race, Gordon spoke with Elliott as well as Fronstretch YouTube, where he shared his thoughts on Elliott’s contact with Ross Chastain.

Gordon said, “Well, you know, you’re not supposed to move out of your lane until you cross the start-finish line and that’s exactly what Chase did and that’s not what I saw out of the 1.”

“You know he dove to the bottom with a real aggressive move, not unusual for him to do that, and never lifted, and turned Chase, and he made contact with the wall so pretty much ended their day,” he added.

When asked what he told Elliott following the race, Gordon replied, “I mean listen, I love the way that Chase Elliott races, a lot of integrity, earns a lot of respect with his competitors and it’s just frustrating him because he doesn’t feel like he gets raced the same way in return.”

Gordon added, “Really proud of the effort that they put in this year. They had a heck of a year. Thought they were in a great position to give Joey a run for his money for this championship. But those guys, Joey and Penske, congrats to them, they did a fantastic job not only this year, but certainly today. They earned it.”

RELATED: Ross Chastain Explains Contact With Chase Elliott That Ended His Chances At The NASCAR Championship

Chastain put the blame on Elliott following the race telling NBC Sports, “I had a really good run, looked like William didn’t get going quite as well as he wanted to and I got to the left of him and saw an erratic move he made to turn left to cover it and I was already there.”

“Look, it’s not how I want to race him or those guys and for everybody at GM I needed other Chevys up there to fight those others guys. It’s not what I wanted to do, but I feel like I had position on him and he tried to cover it late,” he explained.

When Elliott was asked about the contact he punted on the question saying, “Just want to say congratulations to Joey and his team. They did a really good job this entire weekend. He’s a very deserving champion and frankly just happy for them. Proud of my team for the effort they put in this weekend, felt like we had got our car a lot better throughout the race, and for that we should be very proud.”

“It was nice to make the round. That’s a very difficult thing to do,” he continued. “Obviously, not content with that, but certainly nice to come out here and have a shot and hopefully we can come back stronger next year and give ourselves another chance and make it go our way next time.”

He did elaborate in a post-race press conference saying, “Looking forward to the off season and really proud of our team for the fight that we put in today and felt like we had just kind of peaked right there before we crashed. And felt like we got our car driving pretty good, we just had our best pit stop of the day. So that was all really solid.”

“And heck we were right there next to the 22. So, yeah, thought we had a shot at it all the way up until we didn’t. And that is unfortunately how it goes sometimes,” he added.

Chase Elliott said several times after the race that he wasn’t sure what happened in his wreck with Ross Chastain at Phoenix. “I thought we had a shot at it all the way up until we didn’t.” pic.twitter.com/K9mdKwgptm

What do you make of Gordon’s comments? How did you see the contact between Chastain and Elliott?