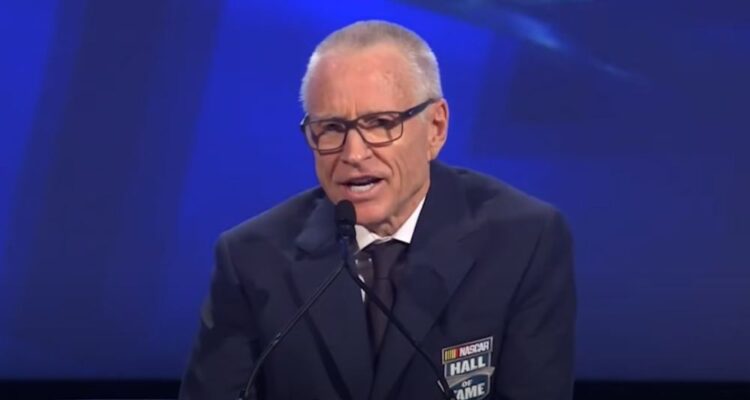 Mark Martin, the NASCAR Hall of Fame driver who drove for years in the No. 6 for Jack Roush, recently reflected on his career and revealed what was most important to him about it.

In the fourth of a four part interview series with Speed Sport, Martin explained that respect was the most important thing to him during his driving career.

Martin then added, “There was a lot of race fans that their favorite driver was Earnhardt, Gordon, or whoever. But most of them respected me even if they weren’t my fans. That means a lot to me.”

Martin began his NASCAR Cup Series career in 1981 making five starts. Of those five starts, he put his car on the pole twice. He also had one Top 5 and 2 Top 10s with an average finish of 15th.

As noted above he spent most of his career driving for Jack Roush in the No. 6 Ford. He joined Roush Racing in 1988. He would win his first race in 1989 at the AC Delco 500 at Rockingham. In the 1990 season he lost the NASCAR Cup Series Championship by 26 points to Dale Earnhardt Sr. That second place finish came from 46-point penalty doled out to Martin and his crew chief Robin Pemberton following their victory at Richmond. NASCAR ruled he had an illegal carburetor spacer.

Martin would post his best season with Roush in 1998 where he had 7 wins, 22 Top 5s, 26 Tops 10s, and three poles. His average finish was 8.6. However, despite the banner year he finished second in the Cup Championship points to Jeff Gordon.

RELATED: Kyle Busch Gets Emotional Following His Last Race With Joe Gibbs Racing: “Wish It Wasn’t What It Was Or What It Is”

Martin would eventually move on to Hendrick Motorsports in 2009, where he posted 5 wins, had 14 Tops 5, and 21 Top 10s along with 7 poles. His average finish was 13.7. He would end up finishing second in the points behind Jimmy Johnson. It would be the fifth and final time in his career he finished second in the NASCAR Cup Series.

It was during this year that Martin also won his last Cup Series race. He took home the checkered flag at the Sylvania 300 at New Hampshire Motor Speedway.

Martin told Speed Sport that he actually has acquired both cars from his first and last wins after they tracked down the chassis number for the car that won at New Hampshire.

“[Matt Martin] discovered that Hendrick Motorsports still had that car, car 538. So I contacted Rick [Hendrick], and we worked a deal. He just honestly gave me the car. We’re in the process of getting that car from him and having it restored back to the Loudon race.”

“I’m gonna have my first win and my last win cars in my possession, which is pretty cool. All this stuff wouldn’t happen if Matt hadn’t started this idea of wanting to do this book,” he added.

Martin also appeared at Las Vegas Motor Speedway back in October with his race winning car, JR51, that won the first NASCAR Cup Series race at the track.

He got to pace the field before they dropped the green flag. You can take a ride with him around the track in the video below.

What do you make of what mattered the most to Martin during his NASCAR career?