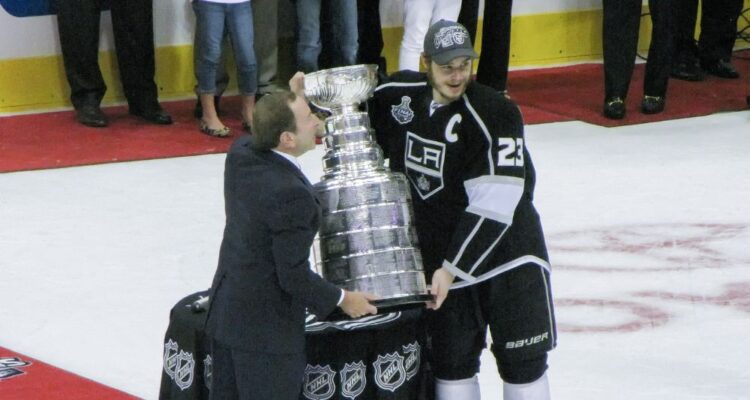 The National Hockey League made it abundantly clear they now worship at the altar of transgenderism when they recently declared that they deny reality by claiming that men can become women and women can become men.

The organization posted to Twitter their support of a Team Trans Draft Tournament that was held in Middleton, Wisconsin.

They wrote, “The NHL is proud to support this past weekend’s Team Trans Draft Tournament in Middleton, Wisconsin. This was the first tournament comprised entirely of transgender and nonbinary players, with around 80 folks participating!”

The organization took it a step further when they responded to a user who asked, “So, men playing on womans team?”

Bishop Michael Burbidge in his letter A Catechesis on the Human Person and Gender Ideology explains, “We know from biology that a person’s sex is genetically determined at conception and present in every cell of the body. Because the body tells us about ourselves, our biological sex does in fact indicate our inalienable identity as male or female.”

“Thus, so-called “transitioning’ might change a person’s appearance and physical traits (hormones, breasts, genitalia, etc.) but does not in fact change the truth of the person’s identity as male or female, a truth reflected in every cell of the body,” he continues.

His Excellency then asserts, “Indeed, no amount of ‘masculinizing’ or ‘feminizing’ hormones or surgery can make a man into a woman, or a woman into a man.”

Later on in the letter he also notes, “The claim to ‘be transgender’ or the desire to seek ‘transition’ rests on a mistaken view of the human person, rejects the body as a gift from God, and leads to grave harm.”

“To affirm someone in an identity at odds with biological sex or to affirm a person’s desired ‘transition’ is to mislead that person. It involves speaking and interacting with that person in an untruthful manner,” Bishop Burbidge adds.

Still later he advises the faithful, “The faithful should avoid using ‘gender-affirming’ terms or pronouns that convey approval of or reinforce the person’s rejection of the truth. It is not harsh or judgmental to decline to use such language.”

He continues, “In the broader culture, Catholics may experience significant pressure to adopt culturally-approved terminology. However, in no circumstances should anyone be compelled to use language contrary to the truth. The right to speak the truth inheres in the human person and cannot be taken away by any human institution.”

This statement of idol worship comes a little over a month after the NHL embraced anti-white racism where they claimed in their Accelerating Diversity & Inclusion report that the organization’s teams are too white. In order to address what they view as a problem they revealed plans to reduce the percentage of white people that work for them.

Discussing the report, the NHL’s Executive Vice President of Social Impact Growth, and Legislative Affairs Kim Davis said, “It says that we are where we expected to be, but now we have the facts to back it up. I think the one area that we are feeling positive about is that 38% of our workforce are women. We’ve done a lot of work to improve in that area, and it’s very consistent with our current female fan base of 40%. And so that’s a great benchmark. Having said that we know we have work to do with women of color and we are leaning in to that.”

What do you make of the NHL worshiping at the altar of transgenderism and encouraging others to join in their idolatry?