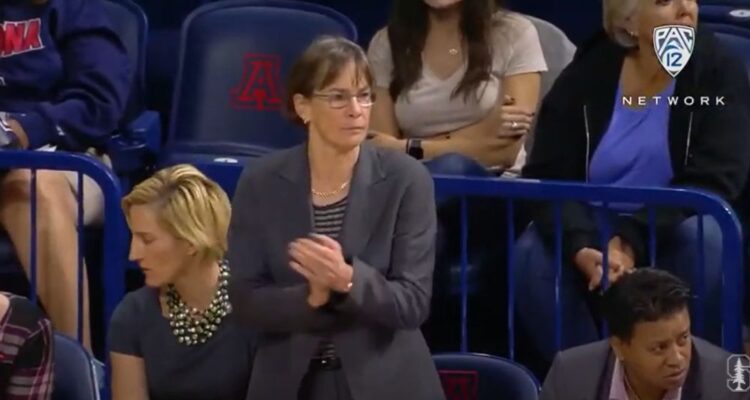 VanDerveer, who won the NCAA National Championship in 1990, 1992, and most recently in 2021, told the New York Times, “I guess sometimes we have this swinging pendulum, where we maybe take two steps forward, and then we take a step back.”

“We’re fighting for all the opportunities to compete, to play, to have resources, to have facilities, to have coaches, and all the things that go with Olympic-caliber athletics. This is a step back.”

VanDerveer’s comments come as part of a New York Times article highlighting female college athletes prostituting themselves via NIL deals to earn millions of dollars. One of the athletes the Times highlights is Louisiana State University gymnast Olivia Dunne, who is reportedly expected to earn over $2 million in the next year.

Dunne told the Times, “Seven figures. That is something I’m proud of. Especially since I’m a woman in college sports. There are no professional leagues for most women’s sports after college.”

She earns that seven figures through endorsement deals with companies like American Eagle Outfitters and Vuori via her Instagram and Tik Tok accounts where she posts racy photos and videos of herself.

As the Times points out athletes have been prostituting themselves for years in the Sports Illustrated swimsuit editions or ESPN’s The Magazine’s Body Issue where athletes pose naked.

Two-time Olympic gold medalist Katarina Witt, who won her gold medals in figure skating for East Germany in 1984 and 1988, even posed as a Playboy cover model in 1998.

RELATED: Baltimore Ravens Linebacker Justin Houston On His Outstanding Performance: “I Just Want To Glorify God In All I Do.”

Regardless of whether this behavior has been accepted and promoted in the past by athletes like Witt and the numerous athletes who have posed for ESPN and Sports Illustrated, it is still wrong.

The Catechism of the Catholic Church explains how prostitution harms all the individuals involved, “Prostitution does injury to the dignity of the person who engages in it, reducing the person to an instrument of sexual pleasure. The one who pays sins gravely against himself: he violates the chastity to which Baptism pledged him and defiles his body, the temple of the Holy Spirit.”

“Prostitution is a social scourge. It usually involves women, but also men, children, and adolescents (The latter two cases involve the added sin of scandal.). While it is always gravely sinful to engage in prostitution, the imputability of the offense can be attenuated by destitution, blackmail, or social pressure,” it states.

In order to combat this modesty should be practiced. The Catechism explains, “Modesty protects the mystery of person and their love. It encourages patience and moderation in loving relationships; it requires that the conditions for the definitive giving and commitment of man and woman to one another be fulfilled. Modesty is decency. It inspires one’s choice of clothing. It keeps silence or reserve where the is evident risk of unhealthy curiosity. It is discreet.”

“There is a modesty of the feeling as well as of the body,” the Church elaborates. “It protests, for example, against voyeuristic explorations of the human body in certain advertisements, or against the solicitations of certain media that go too far in the exhibition of intimate things. Modesty inspires a way of life which makes it possible to resist the allurements of fashion and the pressures of prevailing ideologies.”

Finally, it notes, “The forms taken by modesty vary from one culture to another. Everywhere, however, modesty exists as an intuition of the spiritual dignity proper to man. It is born with the awakening consciousness of being a subject. Teaching modesty to children and adolescents means awaking in them respect for the human person.”

What do you make of VanDerveer calling out female college athletes prostituting themselves via the new NIL system?

NEXT: Tyson Fury: “Whatever Your Going Through In Your Life Now Is The Time To Invite God In To Your Life”