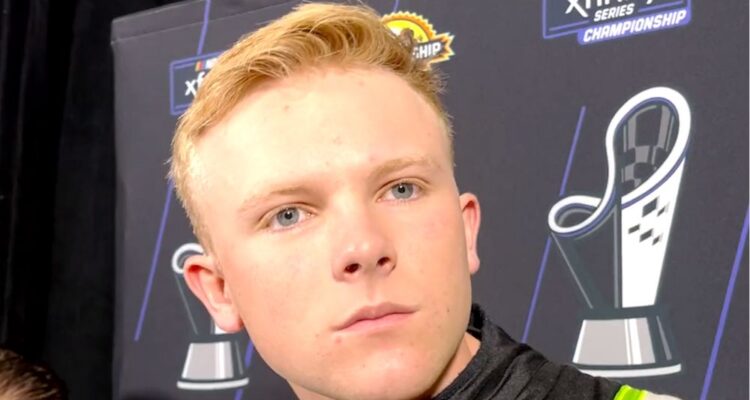 Ty Gibbs Backtracks On Comparing Himself To Jesus Christ: “It Came Out The Wrong Way”

Ty Gibbs backtracked on comparing himself to Jesus Christ now saying that he regrets his comments and claims that “it came out the wrong way.”

Gibbs compared himself to Christ after he intentionally wrecked his teammate Brandon Jones on the last lap at Martinsville eliminating Jones from the Championship and claiming the victory for himself.

Jones was leading the race at the time and if he won the race he would advanced to the Championship 4 along with Ty Gibbs, Josh Berry, and Noah Gragson.

RELATED: Ty Gibbs Bizarrely Compares Himself To Jesus Christ After Wrecking His Teammate To Take The Checkered Flag At Martinsville

Fans rightfully didn’t like Gibbs’ unsportsmanlike move and rained down boos on him as he exited his car. He even began egging them on, waving his hands towards himself trying to get the crowd to boo louder.

The fans don’t like his move to win. #NASCAR pic.twitter.com/fYSQRuJwEF

While he was celebrating the victory that NASCAR awarded him, a number of fans also began chanting, “Thank you grandpa!”

Fans chanting “Thank you, grandpa” to Ty Gibbs as he celebrates in victory lane. pic.twitter.com/bPGgePBGs8

Following the race, Gibbs spoke with SiriusXM NASCAR Radio where he was asked about getting booed. He answered, “I always go back to the same verse. Jesus was hated first and among all the people.  So, you know, that’s a part of it, I feel like. Silencing out the crowd. And I feel like that’s what you have to do as a professional athlete.”

“I feel like some of the best people are going to get booed and that’s part of life. You can’t let other people’s opinions and thoughts drive your actions and make you feel bad or anything. It’s just part of life,” he added.

💭 “Jesus was hated first and among all the people. That’s a part of it […] silencing out the crowd.”

When asked if the boos eat him up, Gibbs replied, “No, not at all. And if I did let it eat me up then it would be weak on my part.”

“There’s definitely things to learn. Like I definitely — there are situations that you have to learn from. You might be able to let it eat you up a little bit just so you learn from it,” he added.

When Claire Lang noted, “Maybe I’d do it differently next time,” Gibbs replied, “I mean that or same stuff like what happened at Texas or even earlier this year when I got in a scuffle. There’s just some stuff that you might let it get to you just so you can learn from it. But besides that for wins are wins, and you can’t let it get to you.”

Gibbs has no changed his tune less than a week later. When asked by FOX Sports’ Bob Pockrass if he regretted comparing himself to Christ, Gibbs replied, “I totally do. And I think that I wasn’t trying to say it like that, it came out the wrong way, of course.”

“And moving forward I just have to do the best I can to be aware of my situation and what is going on,” he added.

Ty Gibbs said he regrets comparing his situation to Jesus being disliked and also responds to Ben Rhodes asking him if he walks on water: pic.twitter.com/fQoVN7IMAj

NASCAR Truck Series driver Ben Rhodes then interrupted Gibbs and asked him, “Are you walking on water?”

Gibbs replied, “I made some mistakes, for sure, and I’m looking forward to getting out of this whole situation that I put myself in.” Rhodes replied, “I enjoyed it. Always a supporter.”

Pockrass also questioned Gibbs about fans looking at him as a rich kid who doesn’t care about anyone. Gibbs replied, “I truly do care about everybody else and my actions put myself in position and if I didn’t do that then I wouldn’t have to be talking about this now.”

“I have to fix my actions and work as hard as I can forward. I work all the time on racing. I spend so much on racing. I work really hard at it, and it’s these things I have to work at and get better at.”

Ty Gibbs on the perception that he is a rich kid with no respect for anything, the celebration after the race and why he keeps getting into these situations. Gibbs: “I don’t want to be known as a dirty race-car driver. I don’t want to be the one getting the boos.” pic.twitter.com/VWr1kFjSWn

RELATED: Noah Gragson Encourages Brandon Jones To Beat Up Ty Gibbs After He Wrecked Him At Martinsville

Pockrass also questioned Gibbs on his celebration and how if he was actually sincere about not meaning to wreck Jones he wouldn’t have celebrated as he did.

Gibbs claimed the thrill of winning overcame him and explained, “Like I said, if I could redo the whole thing I would. And being a part of that and winning, it definitely — it’s hard, you’re caught up in the moment.”

“But looking at it from an outsider’s perspective and looking at it from somebody in the stands, it’s completely ridiculous and unacceptable,” he said. “And someone on the team and sponsors, even Brandon, it’s completely unacceptable and I was just caught up in the moment. And I won and I’ll go back and learn this stuff in the future. Hopefully, I’ll learn from this and I’ll work as hard as I can to not put myself in these positions.”

As for why he keeps finding himself in these situations, he explained, “I guess just being over aggressive in some of these situations and I have the will to win, but sometimes that is not the right thing to do. I just have to change my actions and earn respect going forward.

What do you make of Gibbs’ comments? Will his actions actually follow his words or will his words continue to be as hollow as they have been all year?

NEXT: NASCAR Fans Call For Ty Gibbs To Be Suspended After Wrecking Brandon Jones And Being Awarded The Win At Martinsville