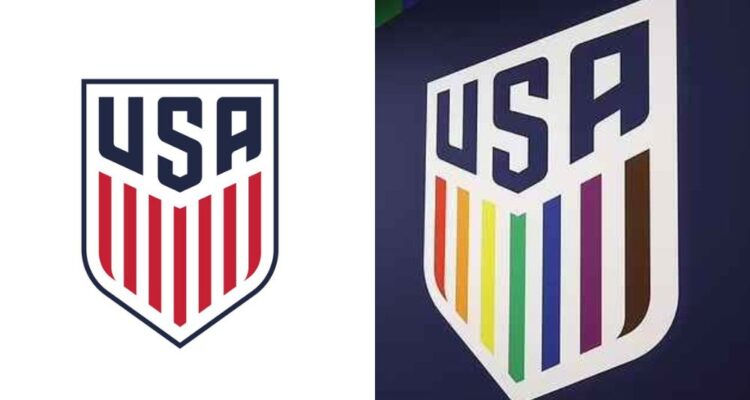 U.S. Soccer made it clear the entire organization is embracing acts of grave depravity by featuring rainbow colored crests at the team’s practice facilities, team hotel, media areas, and parties at the FIFA World Cup Qatar 2022.

As reported by The Daily Mail, USMNT’s Chief Communications Officer Neil Buethe explained the decision to include the rainbow crest, “As part of our approach for any match or event, we include rainbow branding to support and embrace the LGBTQ community, as well as to promote a spirit of inclusiveness and welcoming to all fans across the globe.”

He added, “As a result, locations that we will manage and operate at the FIFA World Cup, such as the team hotel, media areas and parties, will feature both traditional and rainbow U.S. Soccer branding.”

Buether provided another statement to Reuters explaining the rainbow crest, “Our rainbow badge has an important and consistent role in the identity of U.S. Soccer. As part of our approach for any match or event, we include rainbow branding to support and embrace the LGBTQ community, as well as to promote a spirit of inclusiveness and welcoming to all fans across the globe.”

He then reiterated, “As a result, locations that we will manage and operate at the FIFA World Cup, such as the team hotel, media areas and parties, will feature both traditional and rainbow U.S. Soccer branding.”

He stated, “We’ve been talking to the team for the last 18 months about Qatar, about some social issues in Qatar, and we think it’s important. I think that when we are on the world stage and in a venue like Qatar it’s important to bring awareness to these issues.”

He continued, “And that’s what ‘Be The Change’ is about. It’s not just stateside that we want to bring attention to social issues. It’s also abroad. And we recognize that Qatar has made strides, and there has been a ton of progress, but there’s still some work to do.”

“‘Be The Change’ basically represents everyone’s individual opportunity to make change and to have change start with them. So I think it is appropriate that we have it here as well,” he concluded.

Be The Change was started in the wake of George Floyd’s death. The U.S. Soccer website explains, “Back in late 2020, following the death of George Floyd and the continued importance of the Black Lives Matter movement, the U.S. Men’s National Team players came together and had conversations about the social injustices that exist at home and across the world.”

“What became abundantly clear through those discussions was that the time to stay on the sidelines was over and they were inspired to develop their own mission statement to send and spread a meaningful message,” the site continues.

It then asserts, “With the goal of inspiring action in everyone, and showing an example of unity within their diverse group that truly represents a snapshot of America, the USMNT players decided on the following phrase: Be The Change.”

The message doesn’t just include promotion of the violent Black Lives Matter movement that destroyed numerous cities and lives that have still not recovered to this day, the promotion of the immoral LGBTQ lifestyle that the Catechism of the Catholic Church declares as “acts of grave depravity” and “intrinsically disordered,” but it also spawned into an anti-self defense campaign.

It notes, “In the following years, the USMNT players continued to find ways to voice Be the Change for positive impact, including this past June by sending a letter to members of the U.S. Senate and House of Representatives imploring them to pass stricter gun legislation.”

“Be The Change” appears to be nothing more than an export of immoral practices in the guise of virtue.

The team previously wore rainbow-branded jerseys in a match against Costa Rica back in June. Announcing the jerseys, U.S. Soccer explained, “As part of its “One Nation” social responsibility efforts to promote diversity, equity, inclusion and belonging, U.S. Soccer will once again partner with the You Can Play Project to celebrate LGBTQ+ Pride month during friendly matches this June.”

They also had players “wear game-specific rainbow arm bands and pride-inspired rainbow corner flags” were used during the matches.

The USMNT quest for the FIFA World Cup begins on November 21 at 2 PM EST when they play Wales. They will then have to face England and Iran in order to advance out of Group B.

What do you make of U.S. Soccer including rainbow logos and crests to promote the team at the FIFA World Cup Qatar 2022?

NEXT: World Cup Ambassador’s Interview Ended After He Says Homosexuality Is “Damage In The Mind”