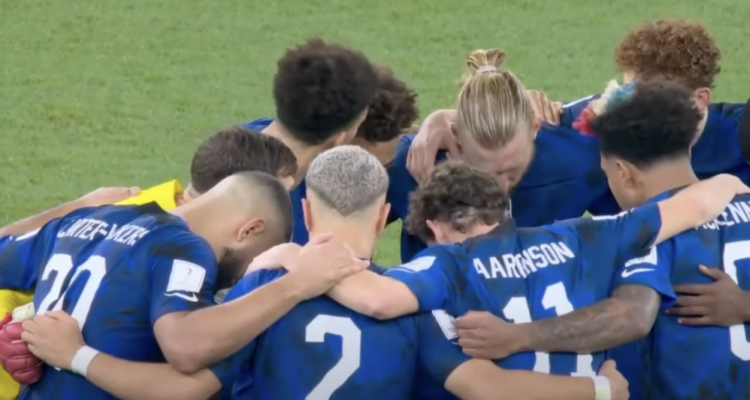 It’s official, the United States Women’s National Team (USWNT) has earned more money thanks to the men’s team’s recent victory over Iran at the 2022 FIFA World Cup than they did from their own victories in 2015 and 2019.

If that seems like an odd arrangement, it is because it is. After years of complaining about the fabled “gender pay gap,” this deal has ultimately solidified what people with common sense have already known this entire time; that there is more demand for men’s sports than women’s sports, and that audiences prove this repeatedly.

Under this agreement which is set “to equalize FIFA World Cup prize money,” it essentially means that the underperforming women’s soccer is getting an artificial payout thanks to the men. None of this has anything to do with the skill or the dedication of the players, but all to do with the fact that when you break it down to bare basics, consumers ultimately choose to spend more time and money on the male teams than their female counterparts.

This isn’t about equality, it has everything to do with greed.

“This is a truly historic moment,” said US Soccer President Cindy Parlow Cone in May when the deal was finalized prior to the World Cup in Qatar. “These agreements have changed the game forever here in the United States and have the potential to change the game around the world.”

According to FIFA’s website, specifically the section regarding the prize fund for the men’s tournament this year, teams that finish within ninth and 16th (those who lose during the first round of the knockout stages), still earn $13 million per team. The current prize pool for this year’s World Cup is $42 million.

RELATED: USMNT Coach Gregg Berhalter Says He’s Only “A Soccer Coach” In Response To Political Questions Ahead Of World Cup Match Against Iran, Has No Problem Pushing LGBTQ+ And Anti-Second Amendment Politics

What this means is that the USWNT has earned more money by not even doing anything than they did from winning their last two Women’s World Cups combined. In 2015, they earned $2 million for their victory where the prize pool was $15 million. In 2019, they earned $4 million from the prize pool of $30 million. Therefore, as a result of the US men’s team advancement to the Round of 16 during this World Cup the USMNT will only be taking half of the $13 million earned, bringing home $6.5 million.

Calls to make the overall prize pool equal between the genders isn’t going away, but if anything this “historic moment” still shows that the gap between men’s and women’s sports has nothing to do with institutional sexism or anything of the sort, but that audiences are just drawn to watch men compete more than women. If anything, this deal only solidifies that point even further.

“They’re actually benefiting from the men actually advancing in the World Cup,” said Black and White Sports co-host John Matrixx. “Guys, I believe in capitalism, I believe in supply and demand, if more people actually want to watch the men play than the women, so be it. They women, they just need to grow their sport.”

“This is why the WNBA doesn’t generate the same revenue as the men, and we’ve seen people our there in the woke sports media talking about there’s a pay gap between the men and the women in the NBA and the WNBA. It’s very, very simple, there’s way more demand for the men, than the women.”

Matrixx also pointed out that “A lot of people don’t know the name of a WNBA team.”

“This is crazy, this is absolutely crazy folks,” Matrixx said about the USMNT having to split their earnings with the USWNT. “One side is actually generating more revenue than the other one. I don’t like this at all guys.”

What is your take on all of this? Let us know in the comments below.

NEXT: U.S. Soccer Embraces Acts Of Grave Depravity By Making The Traditional Crest Rainbow Colored “To Support And Embrace The LGBTQ Community”