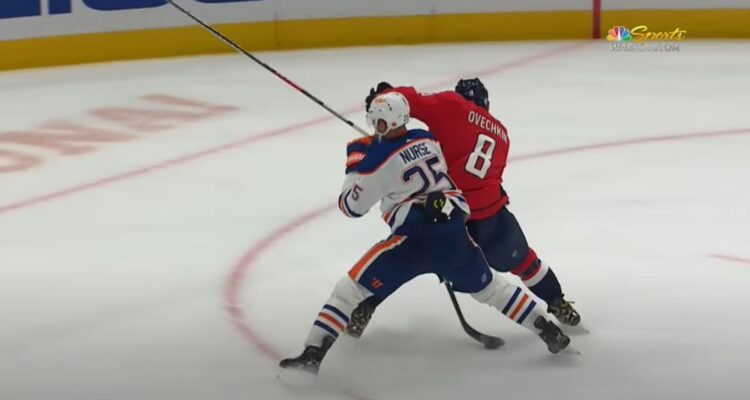 WATCH: Alex Ovechkin Powers Washington Capitals To Victory Over Edmonton Oilers With Filthy Behind The Back And Through The Legs Assist

Alex Ovechkin isn’t just a goal scorer and he proved that as he powered the Washington Capitals to a 5-4 win over the Edmonton Oilers on Monday night.

The Capitals’ Dylan Strome got the scoring started as he stole the puck from Edmonton’s Warren Foegele at the blue line. He then darted down the left board and snapped a wrister past goaltender Stuart Skinner’s right shoulder.

The Caps continued the scoring with Strome scoring a second goal with a slick assist from Evgeny Kuznetsov, who had a break out game.

At the beginning of the second period, and in the waning seconds of power play, Kuznetsov collected the puck on the half wall. He skated towards the circle and tossed a pass right on to the stick of Strome who directed the biscuit past Foegele and into the back of the net. It would be the first of four power play goals for the Capitals.

The Oilers struck back as Conor McDavid, playing in his 500th game, got the puck at the blue line, skated past Strome, darted past another Capitals defender then beat Washington’s goalie Charlie Lindgren.

Celebrating his 500th game in the most McDavid way possible. 😮‍💨 pic.twitter.com/W7rt3khXCv

After the Oilers took two penalties giving the Capitals a 5-on-3 advantage, Kuznetsov scored his first goal of the season.

The Capitals worked the puck down low to Dylan Strome who deftly passed it to the back door to Kuznetsov who buried it in the back of the net.

The Oilers roared back with Ryan Nugent-Hopkins scoring on an odd man rush. Nugent-Hopkins would force a turn over at the top of the circle and send the puck into the neutral zone.

Zach Hyman beat Alex Ovechkin to the loose puck. He then skated past a Washington defender and dished the puck to Nugent-Hopkins, who batted the puck out of the air and into the back of the net.

On a power play with less than six minutes left in the second period, Ovechkin potted a deadly wrister from his office, putting the Capitals up 4-2.

An ELECTRIC power play for the Caps tonight 🔥

Ovi with the goal to put Washington up 4-2#GR8 | #788 pic.twitter.com/OrcexoqnZM

Edmonton would continue to keep the game close with Leon Draisaitl putting the puck into a gaping net after a nifty pass from Hyman, who collected a loose puck in front of Lindgren.

This feed from Hyms. 🤌 pic.twitter.com/jjdpp5Y3s8

The Capitals would finish off the Oilers with Ovechkin getting in behind their defensemen and darting toward the top of the circle. He then out muscled the Oilers defenseman while passing the puck behind his back and through his legs to Kuznetsov who put it home.

ICYMI:
Don’t look away you might .. MISS SOME MAGIC.

Edmonton would respond again with Ryan Nugent-Hopkins evading the Capitals’ defenseman and positioning himself right in front of the goal crease. He received a deft pass from Darnell Nurse and put the puck top shelf behind Lindgren.

The win moves the Capitals to 6-6-2 and into 6th in the Metropolitan Division behind New Jersey, Carolina, the Islanders, Rangers, and Flyers. Ovechkin’s goal and assist gives him 8 goals and 5 assists for a total of 13 points on the season. He leads the team in both goals and assists. Kuznetsov leads the team in assists with 9.

Edmonton falls to 7-6-0. McDavid’s goal marks his 13th for the season as he continues to pace the entire league. He also leads the league in points with 27. His teammate Leon Draisaitl is right behind him with 25 points and 8 goals.

The Capitals next play Pittsburgh on November 9th at 7:30 PM ET. The Oilers play the Tampa Bay Lightning at 5:30 PM MT on November 8th.

What do you make of Ovechkin’s filthy pass to Kuznetsov to seal the game for the Capitals?