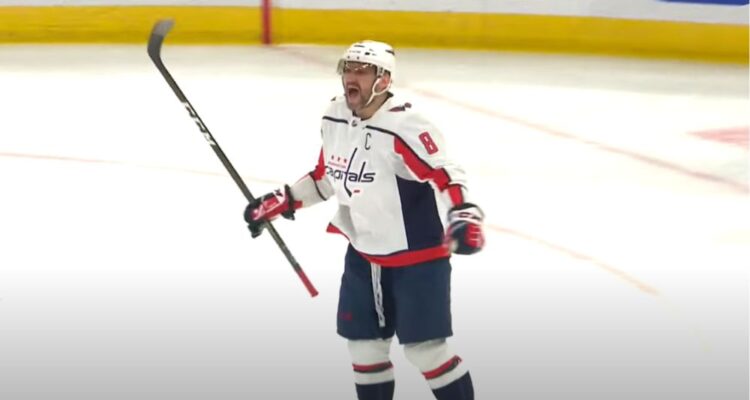 Washington Capitals forward Alexander Ovechkin scored his 800th career goal in a dominating performance against the Chicago Blackhawks on Tuesday night that included a hat-trick.

Ovechkin scored his first goal after John Carlson flicked the puck from outside the left circle towards the net. The puck would bounce off Ovechkin who quickly snapped a shot on goal and past Blackhawks goalie Petr Mrazek.

None other than who 🐐 pic.twitter.com/jnBED6AAXz

As The Washington Capitals PR reported the goal gave Ovechkin the lead for most career game-opening goals with 136. He passed Jaromir Jagr who he was previously tied with.

Capitals reporter Mike Vogel also relayed that the goal was Ovechkin’s 12th career goal in the opening minute of a contest. It ties him for third all time in that category with Gordie Howe, Phil Esposito, and Dave Taylor. Crosby leads the category with 14 while Mark Messier is second with 13.

It also broke Brett Hull’s record for most first goals in a game. Hull previously held the record with 65. Ovechkin is now the sole leader in the category with 66.

Ovechkin didn’t take long to notch his second goal of the game and his 799th overall career goal. At the 8:14 mark while the Capitals were on a powerplay Sheary completely faked out Mrazek who overplayed a possible shot.

With Mrazek outside of the crease, Sheary slipped the puck to Ovechkin who was lurking just beside the paint and put it into the gaping net.

This man is unbelievable pic.twitter.com/pDqeMLZFB1

The first period would close out with Chicago’s Tyler Johnson scoring his third goal of the season with a minute left. In the second period, Ovechkin wouldn’t score, but he would assist on Trevor va Riemsdyk’s third goal of the campaign to put the Capitals up 3-1.

Ovechkin would receive the puck from Dylan Strome near the left face off dot. After the puck got caught up in his skates, he would throw it at the net where it bounced off Mrazek’s pads and to a wide open Van Riemsdyk who easily put it into a gaping net.

Chicago would make it 3-2 with a power play goal from Jonathan Toews. The Capitals would regain their two goal lead when Nic Dowd scored at the 17:18 mark.

Ovechkin accomplished the hat trick and potted his 800th career goal just six and a half minutes into the third period.

Capitals forward Anthony Mantha collected the puck below the blue line and dished into the slot to a charging Kuznetsov. Kuznetsov was shut down by Mrazek, but Mantha would collect the rebound and dish it to Ovechkin. Ovechkin would collect it and then throw it in the empty net behind the fallen Mrazek.

A little over two minutes later and Mantha would score his eighth goal of the campaign making it 6-2. The Blackhawks didn’t go quietly as Max Domi scored his 10th goal of the season to make it 6-3 with just over a minute left in the game.

Capitals defenseman Dmitry Orlov finished the Blackhawks off with a little over 30 seconds to go for his first goal of the season.

Following the conclusion of the game, Ovechkin gave his stick away to an excited fan.

this kid may be the real winner of the night pic.twitter.com/eIRInnYNTn

He then celebrated with his teammates as they showered him in beer.

Ovechkin is just one goal shy of tying Gordie Howe on the NHL’s all-time goal list. He’s 94 goals away from Wayne Gretzky’s record of 894 goals. Ovechkin, Howe, and Gretzky are the only players to have ever scored more than 800 goals in their NHL careers.

The Capitals are now 15-12-4 and currently sit 6th in the Metropolitan Division. They are one point behind the New York Rangers for a wild card spot. They are also playing some of their best hockey of the year going 7-2-1 in their last 10 games and are currently on a five game win streak. The second longest current win streak behind the Pittsburgh Penguins.

What do you make of Ovechkin’s career night?

NEXT: Boomer Esiason Suggests Joe Biden’s Administration Should Have Arrested Alexander Ovechkin To Swap Him For Brittney Griner