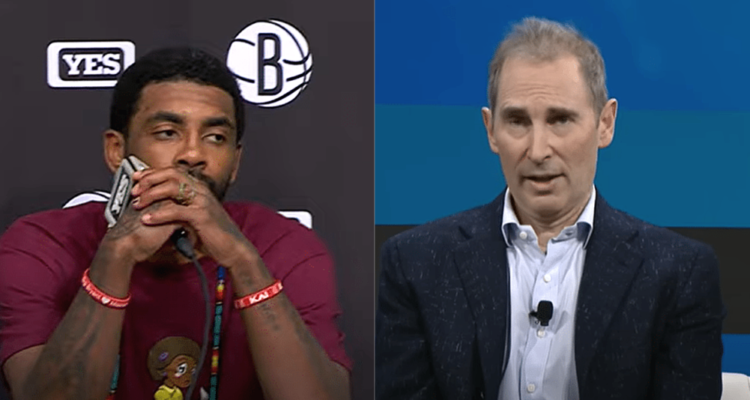 Amazon CEO Confirms Company Will Continue To Sell ‘Hebrews To Negroes’ Documentary That Got Brooklyn Nets Star Kyrie Irving Suspended, Says “The Purpose Of The Content Is Not Hate”

Last month, Brooklyn Nets star Kyrie Irving was the center of a sports media firestorm after he posted the link to an Amazon Documentary entitled Hebrews to Negroes: Wake Up Black America.

RELATED: Charles Barkley Insinuates That Kyrie Irving And Kanye West Are Racists, Calls For Kyrie Irving To Return To The Court, And Claims Free Speech Has Consequences

The film supported narratives created by Black Hebrew Israelites who believe they are the real descendants of the ancient Israelites. The film, which is available to be viewed on Amazon claims to reveal the true identity of the Children of Israel by exposing what Islam, Judaism, and Christianity have covered up for centuries.

As a result of his post, Irving was suspended on Nov. 3 according to the Brooklyn Nets for refusing to say he stands against anti-Semitism categorically. As Irving faced suspension for linking his followers to the documentary, some questioned why Amazon allowed the documentary on their platform for purchase.

Amazon CEO Andy Jassy confirmed on Wednesday that despite calls for Hebrew to Negroes’ removal, the film will remain on sale on Amazon saying that removing any works whose primary purpose is not to espouse hate is a “very slippery slope.”

In an appearance at the New York Times Deal Book conference, Jassy said, “Trying to decide which content contains hate content to an extent enough that we don’t provide access to customers is one of the trickiest issues that we deal with at the company.”

“In some cases it’s more straightforward when you have content that actively incites, or promotes violence, or teaches people how to do things like pedophilia, those are easy,” he continued. “We don’t allow those. And those are straightforward decisions.”

Jassy further asserted, “When you have content whose primary purpose is not to espouse hate or ascribe negative characteristics to people, that is much trickier and a very slippery slope if we take a lot of those out of the store.”

He went on to say that Amazon has “hundreds of millions of customers with lots of different viewpoints.”

He then noted, “Inside the company we won’t tolerate hate, or discrimination, or harassment, but we also recognize as a retailer of content to hundreds of millions of customers with lots of different viewpoints that we have to be willing to allow access to those viewpoints even if they are objectionable and even if they differ from our personal viewpoints if you’re going to serve that number of people.”

When the New York Times’ moderator Andrew Ross Sorkin indicated he was distressed by the book and film’s availability on Amazon because he is Jewish and that it could lead to anti-Semitism and violence sometime down the road, the Amazon CEO said he is Jewish as well.

“Look, I’m Jewish too, and I am worried about anti-Semitism and I find several parts of that content very objectionable, but I think that you have to have principles if you’re going to manage something as large as we do with hundreds of millions of customers.”

“Again, to me, you have to be willing to allow viewpoints that are different from your own if the primary purpose of the content is not hate,” Jassy added.

The official description on Amazon for the film states, “The Movie Hebrews to Negroes: Wake Up Black America uncovers the true identity of the Children of Israel by proving the true ethnicity of Abraham, Ishmael, Isaac, Jacob, the Sons of Ham, Shem & Japheth.”

“Find out what Islam, Judaism, and Christianity have covered up for centuries in regards to the true biblical identity of the so-called ‘Negro’ in this movie packed with tons of research,” it concludes.

Due to the nature of the Black Hebrew Israelites movement, the media accused Kyrie Irving of being anti-Semitic and supporting the hatred of Jewish people.

The Nets gave Irving six conditions to be reinstated on the team according to The Athletic’s Shams Charania which included:

Irving sat out for a total of 8 games effectively missing the entire month of November due to the Twitter controversy. Irving has apologized for promoting the movie after being suspended by the Nets.

“I don’t stand for anything close to hate speech or antisemitism or anything that is going against the human race,” Irving said.

“I feel like we all should have an opportunity to speak for ourselves when things are assumed about us and I feel it was necessary for me to stand in this place and take accountability for my actions because there was a way I should have handled all this and as I look back and reflect when I had the opportunity to offer my deep regrets to anyone that felt threatened or felt hurt by what I posted, that wasn’t my intent at all.”

What are your thoughts on Amazon continuing to profit on “Hebrews to Negroes: Wake Up Black America?”