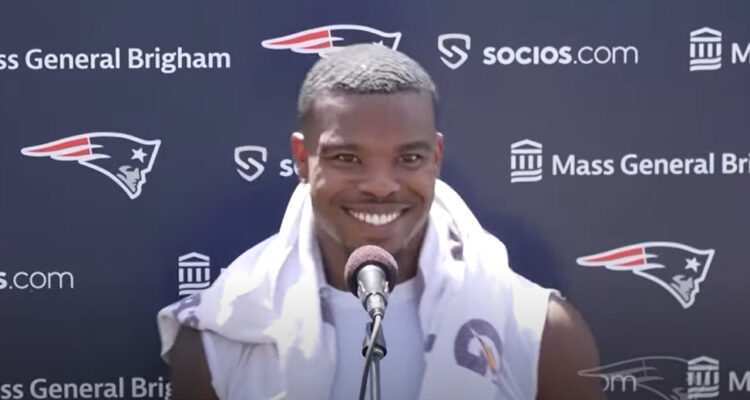 New England Patriots running back Damien Harris put his eternal soul in jeopardy by choosing to promote the murder of children as part of the NFL’s My Cause, My Cleats campaign.

The My Cause, My Cleats campaign is described by the NFL as giving players “the opportunity to pick a cause that is important to them and represent their chosen organization on custom designed cleats.”

The campaign takes place during week 13 of the NFL season. After being worn, “players have the option to donate their cleats to NFL Auction.” All proceeds from the auction “go to the respective causes selected by players.”

RELATED: Super Bowl Winner Tony Dungy Calls Out Georgia Senator Raphael Warnock On Abortion: “What Does Your Bible Tell You It Is?”

Harris chose to promote the murder of children by choosing to showcase Pro Choice-Planned Parenthood League of MA.

He tweeted, “Thankful for the opportunity to represent Planned Parenthood Advocacy Fund of Massachusetts and to support women across America in the fight against the regulation of their bodies. #HerBodyHerChoice”

Not only did Harris promote the murder of children, but so did Nike Football as they responded to Harris’ tweet with one of their one and a number of clapping emojis.

In fact, they claim that the mutilating of women’s bodies and the killing of children is “essential health care that cannot wait for the end of a pandemic of the whims of politicians.” To that end they reported they slaughtered 383,460 children in 2021 alone.

For someone who claims to be a believer in God, Harris is actively defying His Ten Commandments and committing a mortal sin by promoting the murder of the most innocent.

Pope John Paul II stated in Evangelium Vitae in 1995, “I declare that direct abortion, that is abortion willed as an end or as a means, always constitutes a grave moral disorder, since it is the deliberate killing of an innocent human being. This doctrine is based upon the natural law and upon the written Word of God, is transmitted by the Church’s Tradition and taught by the ordinary and universal Mageisterium.”

He added, “No circumstance, no purpose, no law whatsoever can ever make licit an act which is intrinsically illicit, since it is contrary to the Law of God which is written in every human heart, knowable by reason itself, and proclaimed by the Church.”

Cardinal Seper also noted in Declaration on Procured Abortion in 1974, “It must in any case be clearly understood that whatever may be laid down by civil law in this matter, man can never obey a law which is in itself immoral, and such is the case of a law which would admit in principle the liceity of abortion.”

He added, “Nor can he take part in a propaganda campaign in favor of such a law, or vote for it. Moreover, he may not collaborate in its application.”

The Catechism of the Catholic Church also states, “Formal cooperation in an abortion constitutes a grave offense. The church attaches the canonical penalty of excommunication to this crime against human life. ‘A person who procures a completed abortion incurs excommunication late sententiae,’ ‘by the very commission of the offense,’ and subject to the conditions provided by Canon Law. The Church does not thereby intend to restrict the scope of mercy. Rather, she makes clear the gravity of the crime committed, the irreparable harm done to the innocent who is put to death, as well as parents and the whole of society.”