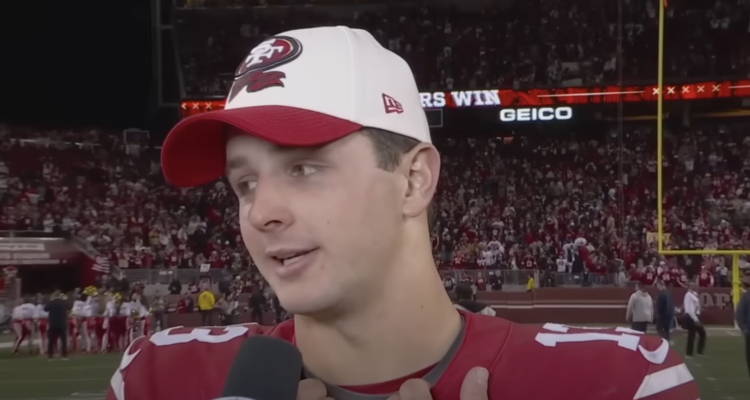 49ers Brock Purdy Unashamed Of Christian Faith: “God And Jesus Are Going To Be My Identity”

San Francisco 49ers rookie quarterback Brock Purdy is getting his time to shine after leading his team to victory over the Dallas Cowboys in the NFC Divisional playoff game. Other than the discussions over whether or not he’ll clinch the NFL Offensive Rookie of the Year Award, many are admiring the young athlete’s strong Christian faith.

“It was a great reminder of where my identity is, where it lies,” Purdy said in a recent interview with Sports Spectrum back in 2021. “And it’s in Jesus. And I continue to lean on Him.”

“Again, the next day I didn’t go out and throw for 500 yards and was this awesome quarterback, but it was just this peace that I had with Him knowing that, ‘Hey, no matter what, I’m going to face moving forward during college football, God and Jesus are going to be my identity. And whatever I face, I won’t be shaken from it.’ I’ve got a great foundation in Him.”

"The bottom line, my identity is in Jesus.”

49ers QB Brock Purdy with poignant words on his faith in Christ from August 2021 pic.twitter.com/PlNtmcngMZ

The young athlete’s faith has been noted for some time, especially among his Instagram followers.

In 2021, one of his more popular posts to the platform included a photo of himself with the caption, “The Lord is my rock, and I will not be shaken. I love you boys and will go to war with y’all time and time again. Roll Clones”

RELATED: Former NFL Running Back Peyton Hillis In ‘Critical Condition’ After Rescuing His Children From Drowning

In early December, Purdy led his team to victory during his first match as quarterback in their game against the Miami Dolphins, claiming that while on field he played with a sense of “fearlessness.”

“You go out there, you prepare as best you can, you get better every single day at practice, and once you get your opportunity, it’s: What are you going to do with it?” he said during the post-game conference.

"You prepare as best as you can. You get better every single day at practice and once you get your opportunity, what are you going to do with it?"

It may not be a surprise to some, but one public figure who counts himself among Purdy’s fanbase is Christian evangelist Rev. Franklin Graham. The prominent evangelical went to Facebook to express his support for Purdy and the 49ers after their victory over the Cowboys.

“Congratulations to QB Brock Purdy and the San Francisco 49ers on their win last night over the Dallas Cowboys! They’re now just one game away from the Super Bowl!”, wrote Graham.

“In addition to being a super talented football player, I love the fact that Brock Purdy is so open about his faith in Jesus Christ,” he continued. “He told the media his secret, “I’m a faith-based guy so that’s how I stay grounded… at the end of the day I know that I’m not defined by the wins or losses as a person.’ I haven’t rooted for the 49ers since Joe Montana, but I’m sure pulling for them now!”

What do you think about Purdy’s moment in the spotlight? Let us know in the comments below.

NEXT: Super Bowl MVP Cooper Kupp Blasts Fashion Brand Balenciaga For “Attack Against Our Young Ones”