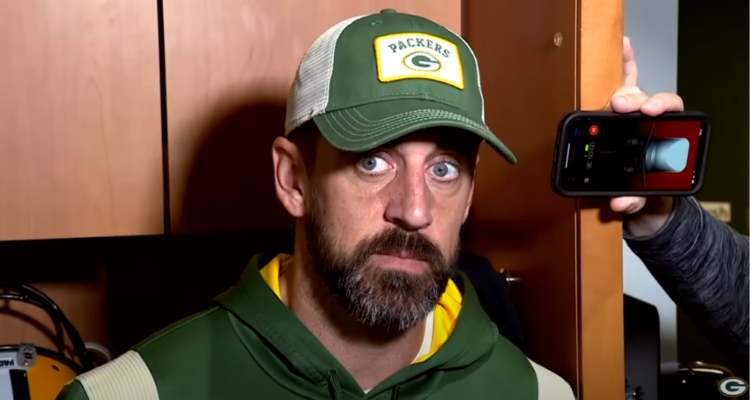 Rodgers comments on woke culture came after he was questioned about a number of sports media outlets claiming he will be traded in the offseason and that he is only playing in the NFL to just win another MVP.

Rodgers responded, “Listen, there’s heroes and villains in sports and entertainment. I think because of my stance on Covid and maybe some other things I’ve been cast as the villain especially the last few years. And so that is the way that a lot of things are often interpreted. I’m not upset about that. I don’t feel like a victim in any way. I don’t have that mentality. That’s fine. I actually embrace that role a little bit if that’s how you want to cast me.”

Rodgers continued, “I did see there were some comments that ‘I’m only playing for MVPs’ and stuff like that. Didn’t maybe quite see the entire clip of some of the stuff that I said. I don’t care about that stuff. That doesn’t offend me.”

He then took aim at woke culture, “I mean this culture — this woke culture wants to be offended by everything. You just go online and find something you don’t agree with. ‘I’m offended. How could you possibly say that?’ I don’t really care. I don’t care who it’s coming from or who said it. They’re entitled to their opinion. It might not be right and every now and then you gotta get on here and say, ‘Hey, you know, need to spin some bulls**t.’ Like that ‘s just not true. Let’s just tone it back a little bit. You might need to do that. Most of the time you just kind of gloss over it. Who cares. Doesn’t really matter.”

Rodgers reiterated, “Because it honestly doesn’t matter. It doesn’t affect my day-to-day. Doesn’t interrupt my whale watching time. Doesn’t interrupt me at all during the day. I don’t agonize about Gronk said I shouldn’t be worrying about MVPs. I know Gronk. I love Gronk. He’s awesome. He’s fun energy to be around.

“But what do they do? If you take the right sound bite from the right thing and its a station that may or may not have in the past been brought to you by Pfizer then they got to make sure that their villain gets cast in the correct light,” he said.

“And whether or not they’re sponsored by Pfizer, Moderna, Johnson & Johnson, or whatever it might be when you go up against some of those powers that be, you put yourself in the crosshairs, they’re going to paint you a certain way. And that’s what the media did to me a couple years ago. That’s fine. That’s their prerogative. That’s what they want to do. But I think I responded pretty good in those times and I’m glad I went through that and anything that comes after that: small potatoes, bro,” Rodgers declared.

“You want to be recognized as the best of the best,” Rodgers asserted. “Anyone who says that they don’t is lying or non-competitive. And either one of those I don’t want to be a part of. So everybody who plays and wants to be the best and wants to be recognized. And then if you don’t win it, you always say the right thing, ‘Oh, it’s more important to win championships.’ But, of course, everybody wants to win it.

“There’s been a lot of guys who played the game never even got an MVP vote. And you can rest on the championships you wo, but you still want to be recognized as the best,” he concluded.

RELATED: Aaron Rodgers Responds To Critics After Packers Fall To Detroit: “I Don’t Give A S*** What Any Of These Experts On TV Have To Say”

Rodgers comments are far from out of the ordinary. Back in November, Rodgers appeared on The Pat McAfee Show and addressed complaints about his poor play coming from the sports media.

He told McAfee, “Well, there’s a lot that goes into all those things. What I can control — two of them weren’t great throws. You know, there’s some other parts to plays. It’s usually not just on one person. Every now and then it’s just on one person, but there’s a lot that goes into each play that could either avoid some of that thing and sometimes guys can screw parts of the play up and you can make a great throw, and make up for all of it.”

“Two of the interceptions weren’t great throws.. I’ve thrown TD passes many times & I don’t give a shit what any of these experts on TV have to say” ~@AaronRodgers12#PMSLive pic.twitter.com/RCaIXRbzMC

He then declared, “Look, I’ve made a throw — I’ve thrown touchdown passes many times, I don’t give a s*** what any of these experts on TV have to say.”

Rodgers then reiterated, “There’s a lot that goes into all these things. And for somebody to play armchair quarterback who doesn’t know what the hell play we’re running or what’s going on, that’s fine. I don’t really give a s*** to be honest with you. It’s s***ty, you know ball goes up in the air and gets — we had a couple of those in the game, the ball’s up in the air and our guys run into each other and the ball gets knocked down. S*** like that. Seems like that’s the way the ball’s been bouncing for us.”

What do you make of Rodgers’ condemnation of woke culture?