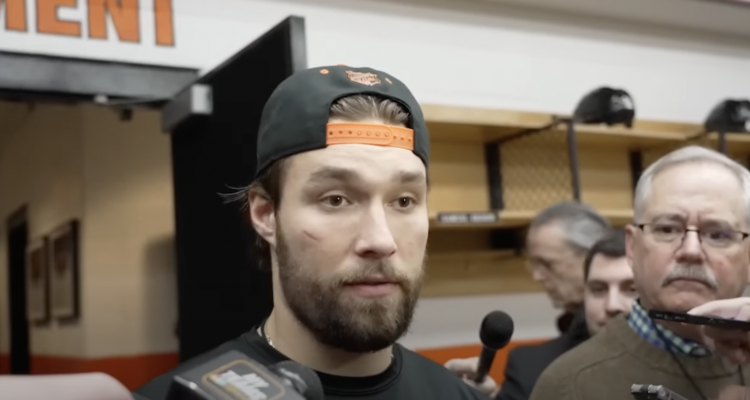 Fans are showing an outpouring of support for Ivan Provorov, the Philadelphia Flyers defensemen who has been under a barrage of media attacks after he abstained from wearing a Pride Night themed warmup jersey due to his religious beliefs earlier this week.

After news came out that he did not participate in wearing the LGBTQ+ rainbow themed attire, the press immediately swarmed him post-game to obtain the reasons as to why.

“I respect everyone,” said Provorov, “I respect everybody’s choices. My choice is to stay to true to myself and my religion.” Provorov is a Christian and member of the Russian Orthodox Church, which holds a traditional stance on the topics of gender and sexuality.

The story continued to gain traction when head coach John Tortorella later defended Provorov’s choice to stand by his faith.

Since then, many sports media outlets have noticed that online sales of Provorov’s Flyers jersey have skyrocketed, with many vendors completely selling out within the last several days.

While there has been overwhelming support for the hockey player sticking to his convictions, his actions haven’t been without criticism either.

Canadian Sid Seixeiro, a broadcaster for Breakfast Television, went on a tirade not only mocking Provorov’s faith but also religious individuals who actually live by their principles as a whole.

“Nothing scares me more than any human being who says ‘I’m not doing this because of my religious beliefs,” said Seixeiro. “Because you have to look at people’s lives who normally say that publicly, you’d throw up at what you saw. You would throw up at what you saw. And I’ve seen that a million times in a lot of different ways. So don’t give me that. With respect, don’t give me that, because no one’s perfect.”

NHL Network’s EJ Hradek took a different step and instead decided to go after Provorov for being Russian, going as far as to say that if he will not “assimilate” to the mainstream, left-wing progressive culture of sports and entertainment, he should instead go fight for Russia in Ukraine.

“If it bothers you that much, there’s always a chance to leave, go back to where you feel more comfortable,” said Hradek. “I understand there’s a conflict of sorts going on over there, maybe get involved.”

Now replace what EJ Hradek said about Ivan Provorov with somebody who’s either Hispanic or Middle Eastern and their would be full blown meltdowns in the Corrupt Corporate Media. This is the totalitarianism of the Alphabet Mob Culture Marxists on display.pic.twitter.com/SqXjTpYB8t

What are your thoughts? Has the media taken this issue way too far? Let us know in the comments below.

NEXT: Washington Capitals Team With Grocery Store Giant Food To Push Disordered Behavior With Lecture On Pronouns And LBGTQ+ Terminology