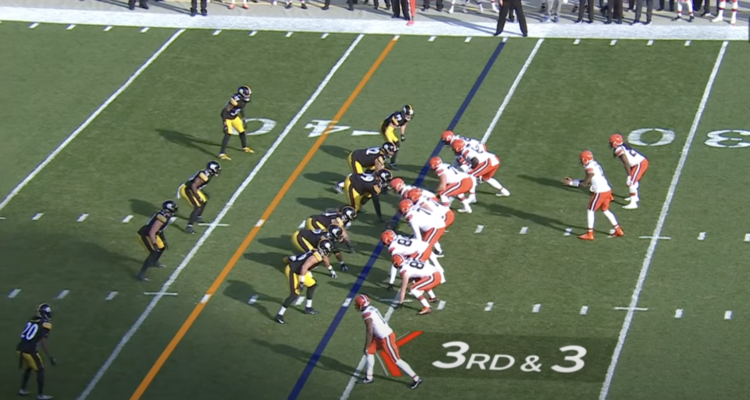 What was perhaps intended as a joke has certainly not landed that way as one Steelers’ player took things a bit too far as he attempted to mock last week’s shocking collapse of Buffalo Bills safety Damar Hamlin, who almost died from a heart attack on the field.

During the the fourth quarter of the game against the Cleveland Browns, the Steelers’ Alex Highsmith tackled Browns QB Deshaun Watson, and as he laid on the ground after the tackle, another teammate ran over to Highsmith and jokingly began simulating CPR on the downed teammate before quickly helping him off the ground.

Obviously, viewers of Sundays’ game were far from happy, especially since Hamlin is still in the hospital recovering from cardiac arrest.

Steelers players did a mock CPR celebration after their sack of Deshaun Watson. pic.twitter.com/Ocnrdfmvl8

“Steelers defense celebrated a sack by performing CPR,” posted commentator Mike Gunz to Twitter. “Of all weeks… not a great look. Yikes.”

Steelers defense celebrated a sack by performing CPR. Of all weeks… not a great look. Yikes. pic.twitter.com/ZvVPCwS6ya

“Even if the Steelers ‘always do this’ or not, doing it in the same week that another player almost died and had to have CPR on field is about as insensitive as you can get,” posted Twitter user @pcrispy.

Even if the Steelers “always do this” or not, doing it in the same week that another player almost died and had to have CPR on field is about as insensitive as you can get. pic.twitter.com/jKyrYOY6Da

“#Steelers are trash for this…” posted another Twitter user.

#Steelers are trash for this…pic.twitter.com/l8SvAdNNSw

While the social media onslaught might paint the Steelers overall in a negative light, several players who went out of their way to do something extremely generous in the wake of Damar Hamlin’s condition have been overlooked by this incident.

Steelers players Levi Wallace, Tre Norwood, Terrell Edmunds, and Cameron Sutton showed their kindness and generosity by gifting a large amount of toys to a daycare center that Hamlin took under his wing while playing for the University of Pittsburgh.

“It’s just a way that we can give back,” said Wallace. “Just to be able to give back to kids that he works with and his community he loves so much. We’re doing it just to honor him and show our love for him that we’re supporting him here in Pittsburgh. Just hearing the great news that he’s going better, I think comes just just a grateful place. I’ve seen how hard he works on and off the field and so anything I can do here in Pittsburgh, I’m here to do.”

NEXT: Former NFL Running Back Peyton Hillis In ‘Critical Condition’ After Rescuing His Children From Drowning