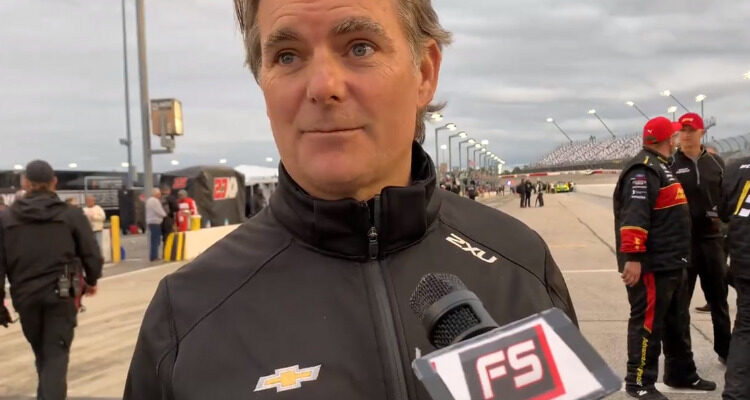 Jeff Gordon Promises William Byron Will Payback Joey Logano, After Logano’s Bump And Run Earned Him The Victory At Darlington

At the Goodyear 400 at the Darlington Speedway, Joey Logano took home the checkered flag after he quickly closed on Byron and then performed a bump-and-run on William Byron in the closing laps of the race.

Driving into turn three, Logano gave Byron a shot to his rear bumper that send the 24 car into the wall, and allowed him to easily drive by him and secure the win with Tyler Reddick unable to threaten Logano in the final lap.

RELATED: Former NASCAR And IndyCar Racer Danica Patrick Reveals Laundry List Of Complications From Breast Implants After She Has Them Removed

After winning the race, Logano celebrated his victory and explained his decision to give Byron the shot to his bumper, “You’re not going to put me into the wall, and not get anything back. That’s how that works.”

At the previous restart, Byron clearly drove Logano into the outside wall as you can see below.

The move allowed Byron to pull ahead of Logano despite Logano having the favored line on the outside.

Byron was visibly upset with Logano following the race and told Fox Sports’ Jamie Little, “We were really close off of two, and I think it spooked him, and got him tight and he was right against the wall and I got the lead.”

“He’s just an idiot,” Byron then added. “He does this stuff all the time. I’ve seen it with other guys. He drove in there 10 mph too fast and with these next gen cars, he slammed me so hard it knocked the whole right side off the car, and no way to make the corner.”

“He’s just a moron. He can’t win a race so he does it that way,” Byron continued. “It was close racing on the restart. We were fasting than him. Obviously, at the end, right rear started to go away and he didn’t even make it a contest.”

Byron ended up finishing 13th after he was moved by Logano.

Gordon would react to the move promising that Byron owed Logano some payback in the future.

When asked to provide his thoughts on the move, Gordon said, “It’s unfortunate to see a win be taken away from you on the last lap like that. Logano’s aggressive and William’s car, I believe, was getting really, really loose. So Logano had a shot at him to do it clean and chose to do it a different way. That’s Cup racing. It was a wild day. Tore up a bunch of cars. It’s unfortunate we didn’t come away with a better finish.”

Gordon would then be asked if he thought it was a fair move, “If I was in the car — I’m not driving. Those guys have to settle that out there. I would have liked to have seen it done different. I’m sure Joey’s going to justify it and William’s got a payback coming to Joey at some point. So that’s the way it works.”

Jeff Gordon talked about what he thought on Logano’s bump and run on Byron.

“Logano had a shot to do it clean. He chose to do it a different way. … I’m sure Joey’s going to justify it. William’s got a payback for Joey coming at some point.”#NASCAR #Goodyear400 @Frontstretch pic.twitter.com/v5JVPfglAA

Logano would further address the move in a press conference after the race saying, “To me, I pry wouldn’t have gone straight to the bump-and-run if it wasn’t for how he got the lead. He came off of turn 2 and drove me into the wall. At that point, I’m lucky my car’s not broken, and I’m a very angry driver. And I think anyone in the field would probably agree if someone’s going to be willing to do that to you, well the gloves are off at that point.”

“I knew if I got back there what I was going to do and what I had to do,” Logano continued. “And that was the way he wanted to race, so I said, ‘Let’s go.’ If he passed me clean, it wouldn’t have looked like that.

When asked about possible retribution from Byron, Logano responded, “We’re equal. We’re equal. You put me in the wall first. Like I said, it’s game on. At that point in my eyes, it’s equal. If I punted him out of the way for no reason there or — well to win the race without him doing something to me in the past at any point, which he never has in the past. ”

“And it’s not like he meant to fence me. I don’t think he meant to run me into the wall. The facts are he did. And it’s racing. It kind of took the win out of my eyes or my hands. Like I said you’re going to have to do what you have to do to get the lead back in the same manner he got it. So that’s kind of how that works,” Logano explained.

What do you make of Gordon’s comments? Do you think Byron owes Logano some payback? What did you make of Logano’s move? What about Byron’s move earlier in the race against Logano?