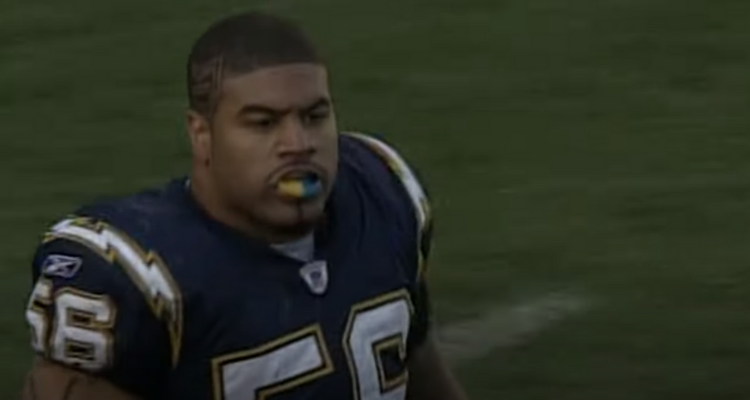 NFL Pro-Bowler and former San Diego Chargers linebacker Shawne Merriman recently agreed with Antonio Brown and revealed he “made a couple valid points” in his criticism of Colin Kaepernick.

Brown, who played for the Pittsburgh Steelers from 2010 to 2018 and won the Super Bowl with the Tampa Bay Buccaneers in the 2020-2021 season appeared on Cigar Talk where he shared his thoughts on the former San Francisco 49ers quarterback Colin Kaepernick.

Cigar Talk host Naji brought up Kaepernick asking, “The politics of the business, like we see, if s*** go wrong on the politics side you get f***ed up. We all watched the Colin Kaepernick s***. Everybody’s seen it. We’ve seen how it happened, and it was just like the politics…”

Brown then asks, “What happened to Kaepernick?”

Naji answered, “Me personally, I feel like because he was kneeling he was doing s*** that people didn’t like and then it was like we ain’t gonna pick him up no more because we didn’t like that. That’s what it felt like for me.”

Naji then asks, “What you mean? After that? But he didn’t get back in the league though.”

The Super Bowl champion responds, “That’s why they gave him the other thing. He took the deal. We don’t feel sorry for you. You took the deal. Get the f*** out of here.”

When Naji posits that Kaepernick wants to get back in the NFL, Brown asserts, “He don’t want to play. He was trash everything.”

Naji counters that Kaepernick was “aight” before Brown responds, “Man, listen, man. Kaepernick did all that and took the money in and got the commercials. We don’t see Kaepernick outside. Where he at? I ain’t never seen him outside.”

“We cool, but now we ain’t even seeing Kaepernick,” Brown asserted. “He not even from the hood. He don’t even been in the trenches. Like we like Kaepernick and all, but like we ain’t really on that. As black people we need to get that clear because like when we have moments ain’t nobody giving us no nothing. So he took the hand out so he got to take the man out and take responsibility for that.”

Brown then criticized Kaepernick’s foundation saying, “He built a foundation. What’d it do though? I’m being real. What superhero he enforce? He made somebody. Who he put on? Who he help?”

Merriman would speak to TMZ telling the outlet, “AB says a whole whether it’s about Tom Brady, whether it’s about something else. And I normally don’t agree with him a whole lot because of just the way in some of the things he says. But I think in this case he’s making a point that more people are just upset on who it’s coming from.”

The three-time Pro-Bowler continued, “He makes some valid points about Colin Kaepernick saying that, ‘Hey, you took money from the NFL, the settlement, the Nike commercials, all these things, and trying to get back in, he don’t want to play football.’ Well, I think a lot of people think that way about all the other stuff that Colin Kaepernick has going on and the opportunities he has to get back into the NFL, and just hasn’t.”

“We all know the lawsuit he had the NFL, against them. And some of the things he was speaking out publicly, but at that point, man, you had your opportunity. And I think that it would be more of a valid point. It would probably even bigger deal if it came from somebody other than AB,” Merriman stated.

NEXT: Super Bowl Winner Tony Dungy Calls Out Georgia Senator Raphael Warnock On Abortion: “What Does Your Bible Tell You It Is?”